Saturday, August 5th, 2017 – Alta to Honningsvag and the NordKapp

We woke up somewhat refreshed. The weather was not full sunshine, but it was still bright. The sky was clear and it was not too cold. We ate a quick breakfast of the thawed buns and some cheese Lucie “found“ in the backpack from the previous day.

We set off again around nine o’clock. Just a few kilometres to the north of Alta, as if someone had hand drawn a line, the landscape changed beyond recognition.

Narvik lays in a vegetation zone that is still taiga. Incidentally, try hearing that from your botanist wife through the intercom. There is no way that you are not going to immediately scan your surroundings for a big, fierce, bright orange feline with stripes ! 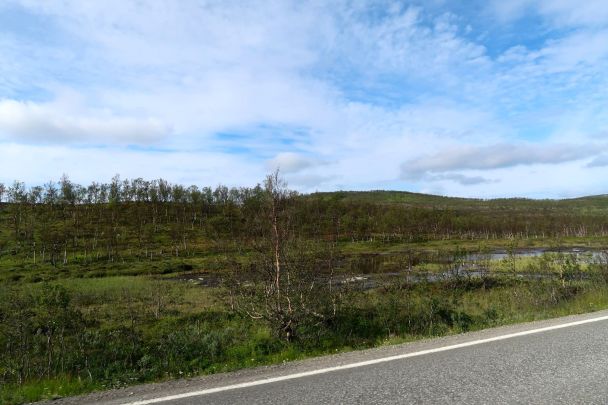 Normally, taiga gradually passes through what is called the “forest-tundra” to the tundra proper. Here there appeared to be no real transition zone and we were quite suddenly confronted by the northernmost tundra vegetation zone. In Europe this really covers only that piece of Norway in the north. The landscape was dwarf birch trees, stretching as far as the eye could see.

We had time, so we stopped for coffee and cookies and periodic “smoking breaks” for Lucie and moved slowly onwards towards Nordkapp.

Many years ago, the Norwegians declared the Nordkapp to be the northernmost tip of the European continent.

But new GPS technology has revealed that it is not, in fact, the northernmost point and, in any case, it does not lie on the mainland, but on an island.

The true northernmost tip of mainland Norway is a few hundred kilometres further east, above Finland.

There are actually two promontories on the island and, oddly, the second northernmost point is Knivskjelodden (71°11’4.80″ N 25°40’32.39″ E), which is next to Nordkapp to the west. Nordkapp itself, is only third.

Those industrious Norwegians have built an underwater tunnel over 6 kilometres long to the island. This replaces the ferry. It is doubtful that the busloads of tourists who enter just another tunnel and leave it at a place where you can not see that they have passed under the sea, even know they are on an island.

It must be a profitable business. When I came there 30 years ago on terribly rough roads, access to the island was was still by a ferry which ran a few times a day. It was full of bikers. The Nordkapp itself was then decorated with an iron globe and there was a shabby building, but nothing else. Now there is a giant building with a cinema, a museum, a café, a restaurant and a car park and a pay-per-view booth. This largely unnecessary fun costs, for two people 540 Norwegian kronor, which is about 1400 CZK or 50 GBP. Included is a film about Nordkapp and the museum, which nobody cares much about. It is also a two-day ticket to make it feel like one will get something for the outrageous cost. The saddest thing is that there is a constant and chilly breeze. All most people want to do there is to climb up to the steel globe, hold tight and take two or three photos. Then you want to get out of there quickly. When a bus full of tourists arrives and gives them a break, they have no choice but to go to the café, restaurant, souvenir shop and watch the cinema for half an hour. You really cannot be outside. I wonder how many of those buses come there again the next day to take advantage of the two-day entrance ticket.

Having realised we had passed through the final tunnel, we headed first to the town of Honningvag and our hotel, the Scandic. It was quite a contrast to our hut of the night before !

This small town of Honningsvag has 1,500 inhabitants and is a sleepy place. It does have a small CoOp supermarket, a fish restaurant, a pizzeria, a café combined with a souvenir shop and a gallery and also a bar. These are all on one street of around 200m length. Large cruise ships anchor there, the people come out and get a bus to take them from the ship directly to the “attractions“ of the Nordkapp and then they come back and sail away. 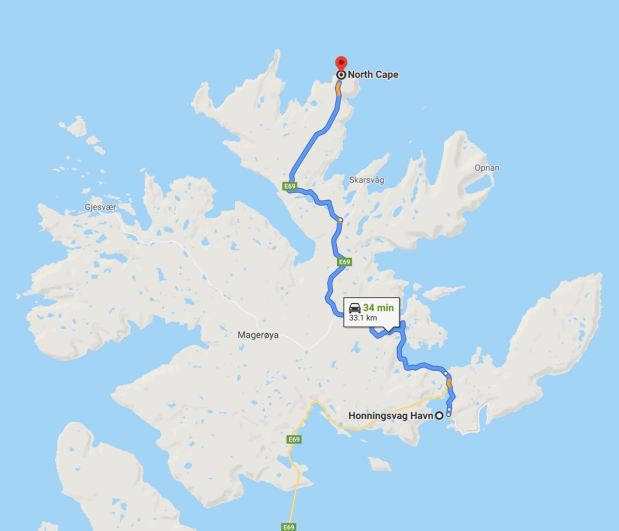 More crowds of people head here from the mainland – there are various round trips offered for Norway, but I doubt many people spend time in the town. We had a rather poor and quite expensive pancake in a café. Our belongings were safely stashed in our hotel, so we set off north. In the shady parts, there was still a lot of snow and wandering herds of reindeer could be seen. 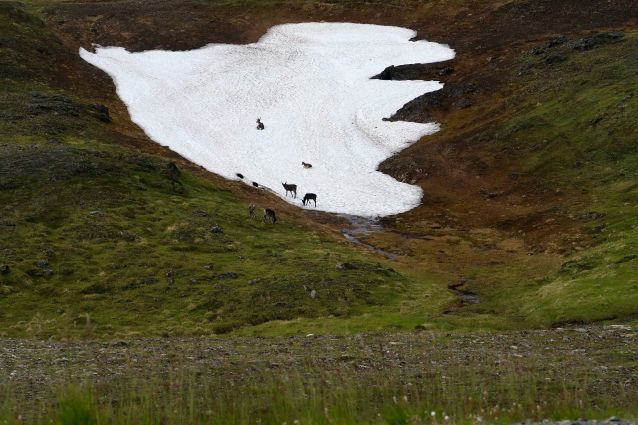 The road, which 30 years before had been a rough oil-bound grit (which was not “bound” very well !), was wide and smooth !

We had decided to begin our fun with a hike to the the point called Knivskjelodden. As mentioned below, this is the second most northerly point in Europe and we knew that when we got there, we would actually be 1437 metres farther north than all the bus borne tourists.

The Loony says it takes 5-6 hours and it is not a difficult hike. There are some descents and climbs, so it is a good idea to have hiking boots because it can be slippery in wet weather. We had came to the conclusion that it would be nothing dramatic. We wear our hiking boots to travel anyway, to save space. We arrived at the car park and we did not even change our clothes. The brisk breeze was a little cold and so we decided it would be better to go dressed for biking. We grabbed a bottle of water and and a few succulent candies and set off around three o’clock in the afternoon.

The Loony is usually so reliable, but it did not have this right !

The first part of the trek was very rocky, but then it flattened into a plain and we began to enjoy ourselves. Then things took a turn for the worse. First and foremost, the whole trek was downhill, which is a detriment to performance, because you know all the time that, at the end, you will have to climb back up. The guide wittily mentions that it is not a hill, but a descent to the beach. The total, topographical descent is, in truth, only 200m. But that includes trekking over endless sharp rocks and through muddy swamps. There are also numerous up and down climbs.

Finally, considerably tired, we arrived at the rocky shore, to find it was at least another kilometre to the actual point. This was even worse terrain. It was over huge, flat, sloping, rocks, with gaps filled with sticky mud. It was the kind of walk that makes you glad you have good travel insurance ! We almost crawled to the end, where we found a small monument and a visitors’ book which we signed with trembling hands. Almost unbelievably, there was a family of Russians sitting there, in totally inadequate shoes. How they had got there and how they were going to get back, I could not begin to imagine. They were drinking a bottle of cognac. I did not blame them.

But the most important thing was that we were looking FROM the north to the “supposedly” northernmost tip of the European continent, the Nordkapp. This was about a kilometre away, across the bay. 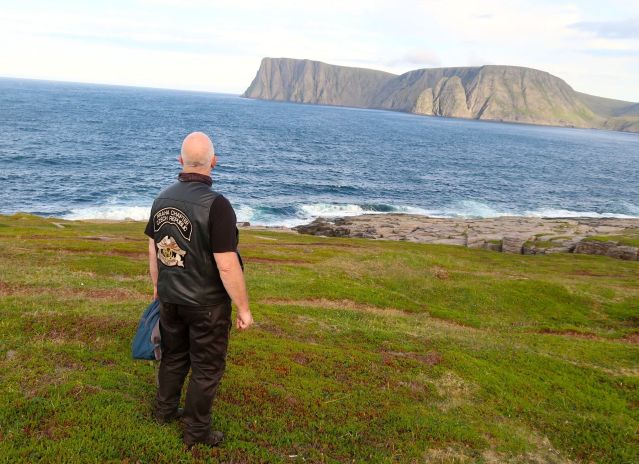 Then the worst came, a full understanding that we would now go over the same harsh terrain again, the other way around. We were already hungry and thirsty and we had only a small rest to recover our strength. It was only nine kilometres back and it was literally hell. We left and the Russians followed soon afterwards. They grew smaller and smaller behind us and, after about half an hour, they finally disappeared behind the horizon. I guess they may still be there. It is true that we finally arrived back at the Harley about six hours after leaving it. However, did not stop at all, except for the last part, when we really had to, because we were so tired. We had kicked about a million rocks and, even though we had hiking boots, our feet were sore. I really pitied those Russians who were still not even visible in the far distance. Sometime, about half way back on the trek, we had realised that getting back to the Harley was not the only problem we had. The restaurants in Norway usually close at ten. It was pretty clear that we could not get to one anyway, because we still over twenty kilometres from the town. But, we were parked just six kilometres from the Nordkapp complex. We decided that, despite complete exhaustion, we would go there immediately so that we did not have to come back the next day.

We arrived at the Nordkapp at about ten in the evening. Despite the late hour, the sun was still high above the horizon.We paid the exorbitant entrance fee and went in to enjoy the delights.Where there had been desolation, thirty years ago, was now a giant, space-age building crammed with tourists.

Braving the freezing wind we walked to the edge of the continent. We took a picture of the globe, me with the globe, both of us with the globe and a view of Knivskjelodden point across the bay. Neither the memorial nor the Russians were visible, but we knew they were over there somewhere. It was all a little anti-climactic ! 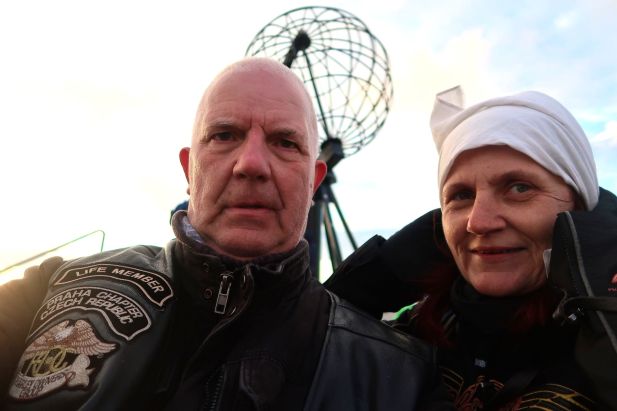 Inside the complex we had some astronomically priced water and hot drinks, because we had to get something. Then we left to head home – less than 30 minutes for 540 NOK + refreshments.

We knew the restaurant in town would probably be closed. It was, as was the pizzeria, and both the two cafes. There was a bar and a Kulturhaus (show every evening!) but no food. A brightly lit sign advertised that the supermarket was open until 23:00, but it turned out to be a lure for the unwary. The petrol station next door was closed too !

Salvation came in our hotel. The restaurant was, of course, closed, but there was a vending machine in the reception area. We managed to get the last baguette, a bag of chips, a Norwegian Kit-Kat and chocolate bar. We gratefully ate it all slowly and washed it down with tap water. Sometimes the simplest things can taste so good !

Feeling better we retired to our comfortable bed. In truth either of us could have slept soundly on a cold, sharp rock.