As always when we are travelling, we started the day with a big breakfast. We had a complicated day in front of us and who knew when we would next get to eat.

Gardemoen Airport in Oslo is not very big. It is quite like Václav Havel Airport airport in Prague, but just a little cosier inside. Everything was done in wood – what else ? That gave us an idea for a song !

We were flying to Narvik and Lucie had, as always, claimed the window seat.

Lucie says that with growing life experience (her latest euphemism for getting older), she always has the same feelings before each trip. There is the enthusiasm of the first concept, the depression of planning and finally wondering why she does not actually just stay at home where everything is at hand and free. However, as the ‘plane climbed over the green, flat land, circled over the dwarf pine trees and rose through the clear blue sky with scattered low clouds, we were both glad to be off again.

It was bright and sunny outside and, suddenly, on the low mountains beneath us, there was snow ! We did not expect to see that in August.

We were flying north along the west coast of Norway. Below us was an archipelago not unlike that which we had flown over in Chile. The only difference was that there were more lakes and rivers instead of glaciers. 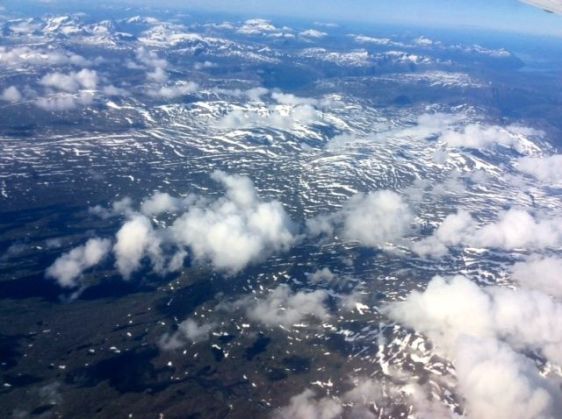 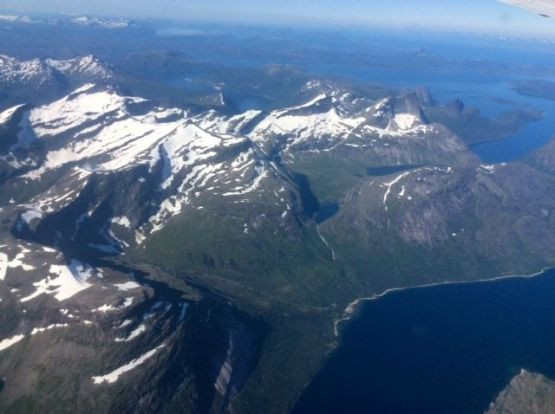 We realised that we were actually doing both ends of the (continental) world in the same year and that they are quite similar.

There was a lot of snow to be seen and we were increasingly hoping it was quite localised ! At least it was sunny and green as we came into land at Evenes. 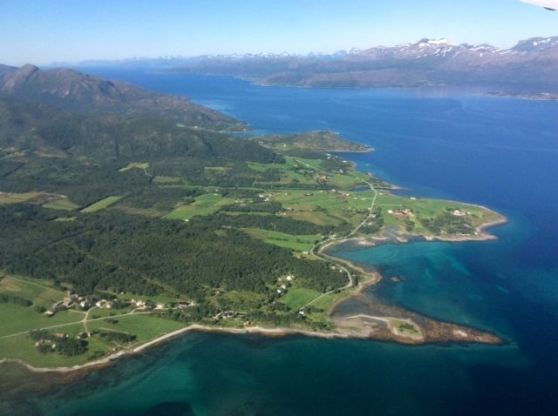 The airport in Narvik is interesting in as much that it is not at all in Narvik. It is not even on the same fjord shore as Narvik. It is (formally) in Harstad, but that is only the nearest town on the same shore of the fjord. The village itself is called Evenes and the air.

So, our outline plan for getting away from the airport was a bit confusing.

First, we would need to take the airport shuttle-bus to the port.

Then, we would need to board the speedboat to Kjeldebotn.

Then we would need to somehow travel to the Harley-Davidson dealership which was also not in Narvik. It was quite a distance away, in a town called Ballangen. To do that “leg“ we would need a taxi.

That would be the logistically demanding part over for the day. Then we would “only“ need to ride to our planned overnight stop – 560 kilometres away ……..

In the event, it was simpler than we had thought it would be.

After landing at Harstad Narvik Lufthavn Evenes, everything went exactly as it should.

Right outside there was the Kjeldebotn minibus which took us straight to the harbour.

At the dock there was a little boat which continuously shuttles across the fjord and brought us quickly to the Kjeldebotn dock. The whole thing was as promised, it did not even take half an hour. 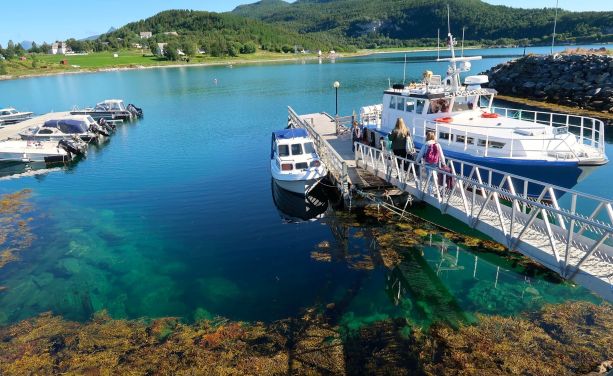 From there we had planned to travel onward by taxi but, surprisingly, none were in evidence. There was a sign, with a telephone number for a local taxi firm, in the small car park. However, the Norwegians are very friendly and, having heard our voices, one older couple approached us offered us a ride. The gentleman took his wife home and then took us all the way to the Harley dealership. Like many Norwegians, he spoke good English, so we talked about everything possible all the way. Only later did we realise that his generosity had saved us a LOT of money …..

In the Harley dealership, everything went smoothly – as it usually does.

Our contact, Reidar Samuelsen (see below), had everything prepared and it did not take too long.

We quickly changed into our motorcycle gear, stowed everything into the saddle bags and headed out.

In that euphoria, we forgot one of the most important things, the complementary rain suits.

In the event, it did not really matter, which is fortunate. We did not even realise our error until we had our first shower of rain. That was over 200 kilometres up the road and, by then, nothing could be done about it.

The dealership is also the “clubhouse” for the world’s most northerly HOG club.

Sadly due to our tight schedule, we did not get to meet any of our HOG brothers and sisters.