When you look at Tasmania on a map, it appears to be a tiny adjunct to the continental mass that is Australia. In comparative terms, that is true. In actuality, Australia is vast and that means Tasmania can be huge and yet still look tiny. I had been driving long distances all of my life and Australia still caught me out. We had come to Tasmania for a quick look around and the distances involved meant that was all we were going to get.

Of course, I wanted a Harley-Davidson Tasmania T-Shirt and so I was devastated to discover that, since I had first looked, the dealership had moved from Hobart to the next big town, Launceston. To drive up to Launceston and back would be a round trip of over 600 kilometres and would kill our final day. It was doable, but there were no Tasmanian “must sees” en-route. It was not going to happen and I did not even bother to press my case. We would need to choose one direction, preferably with some sort of circular theme for maximum coverage. In the end, Lucie chose the direction of the southeast coast, which looked rugged, which promised bridges and bays and islands and which even had a couple of historical landmarks. After breakfast, which had mysteriously materialised in our room the evening before, we headed off to the pontoon crossing over the Derwent and swung north. We drove to Brighton, then swung east in the direction of Sorell and on to Dunalley and the Tasman Peninsula. The peninsula is connected to the mainland only by a narrow strip of land, called the Eagle-hawk Neck. the “neck” is also bisected by an artificial canal.

We checked the Looney to be sure we would not miss anything of interest. It was fairly obvious, from the way that the most mundane things were mentioned and glowingly described, that items of true interest were few and far between. A huge bush fire in the Dunalley area in 2013 was mentioned and its ravages were still very evident in the blackened bush over six years later. Along the way, we passed a number of deceased Tasmanian Devils. Despite its comparative rarity, this had replaced the kangaroo as the “roadkill of choice”. There are kangaroos in Tasmania, but we did not see a single one.

The Tasman Peninsula was an ideal place to keep the very worst convicts. The peninsula has, if you have a good imagination, the shape of an eagle, whose head is connected to the mainland. The “head” is joined to the “body” by a long, 100 metre wide strip of land called, unsurprisingly, the Eagle-Hawk Neck. Viewed from a lookout point on the hills above, it looked positively idyllic. 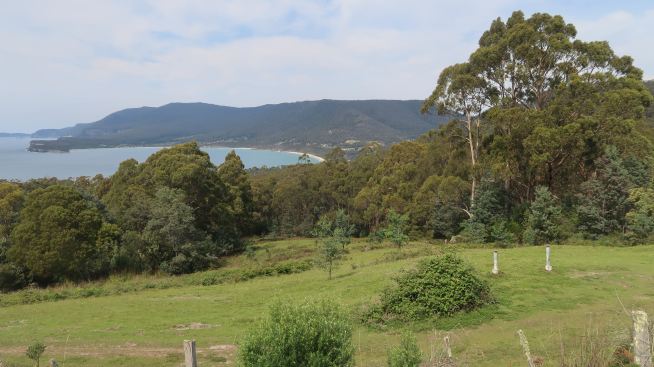 This was not the reality in days gone by. The strip was the ideal choke-point to ensure the convicts held on the peninsula did not require much guarding and yet still had no real chance of escape. A canal, with a narrow, guarded bridge was dug at the mainland end. Across the neck itself was the so-called “Dog-line“. Ferocious attack dogs were chained to stakes in such a way that the orbits that those chains allowed the dogs intersected and there was no clear way through. Lara Croft might have given it a go, emaciated convicts had no chance.

In order to discourage egress by swimmers, rumours were deliberately spread among the prisoners that the sea was full of sharks. It is true there are some, but in a long day of driving around the coast we did not spot a single, protruding fin.

The place that had particularly caught Lucie’s attention was an old coal mine that had been worked by penal labour, but the whole history of the peninsula was both long and grim. The scenery was picturesque, but stark and harsh. Viewpoints were well signposted and we enjoyed some breathtaking views from the cliffs.

We also found another (sea) “blowhole“. 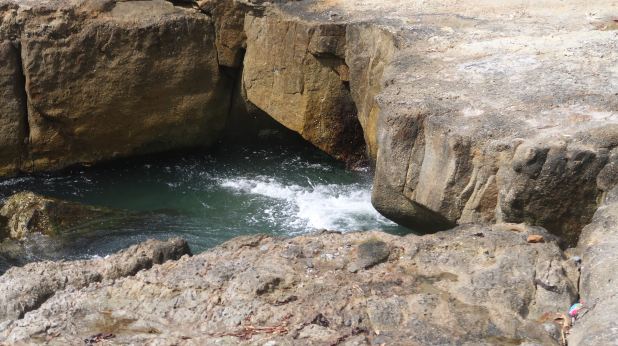 We came first to Port Arthur. This was where criminals were sent when, after being deported for criminality, they committed further crimes in the colony. It now enjoys UNESCO World Heritage status. When we got there, we were surprised to find a three-level parking lot, packed to bursting point. At the entrance, the admission fees were eye-watering, so we decided to give it a miss. We could see from the entrance area that its well maintained grounds were simply heaving with people. The Looney says it is a depressing place, but in the hot sunshine, the only depressing thing was the admission price.

Also according to the Looney, in 1996, a young man from Port Arthur picked up his rifle, shot 35 people dead and then burned down a local hotel. Maybe it was that story that attracted those crowds of tourists.

Instead of remaining in Port Arthur, we headed further south to the “Remarkable” cave. This was a place where oceanic erosion had eaten through the base of a large rock and hollowed out a small beach beyond. Well presented, well maintained, informative, truly remarkable and free. 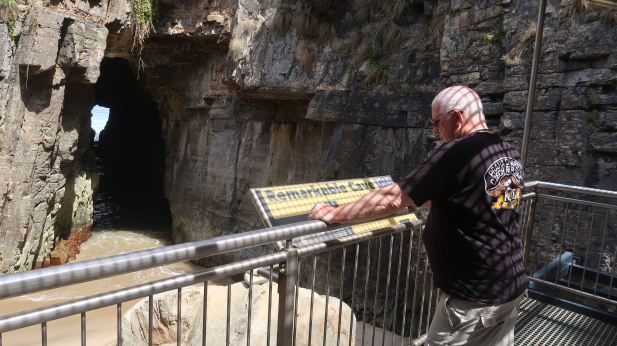 Shortly before we arrived there, we drove past a string of white sand beaches and, at one, we stopped. The clear blue sky, the endless, deserted strand of gleaming white sand and the glistening azure sea, were all from some upmarket travel brochure. We decided to take a paddle and we were both tempted to go for it and take a swim. But as soon as we dipped our toes, it became evident that it was no coincidence that the beach was deserted. Despite its inviting blue hue, the sea was quite brutally cold. We were later informed that it always is.

Eventually, after we had circled the entire peninsula, we reached the coal mines at Saltwater Creek that had drawn us there in the first place. This was truly depressing. Only a few crumbling dwellings indicated what it must have looked like there. It was a complete wasteland. When not slaving down at the bottom of the nearby mineshaft, the prisoners lived in solitary confinement in a block of cells, which were more like dungeons. Escape was eminently possible, but there was nowhere to go in the harsh terrain and impenetrable bush. At least, at the mine, there was something to eat. Suicide was commonplace. Even operated by what was effectively slave labour, the mine could not be self financing and closed after a few short years. We were almost alone there. Even today, the site has an oppressive atmosphere and it fell on us a bit. That might have been connected to its depressing aspect or to the fact that it was more or less where our journey ended. We would return to New Norfolk, then to Melbourne and then to home.

As we set off back around the coast and back across the peninsula, Lucie decided to check that our internet had been correctly extended. It had not. We had paid for a three day extension, but, because we had done that before it expired, it had extended 3 days from when we did it. A final slap from OPTUS. We had to switch from peaceful contemplation straight into emergency mode, because we only had about half an hour to find an OPTUS branch in Hobart and sort it out. If we could not, we would have a problem.

Of course, the internet stopped working at that exact moment and in the middle of an unknown city, which immediately seemed larger, we could not locate an OPTUS outlet. I solved this by switching on my Czech data roaming. When we did finally find a branch, at the very last second, we were quickly extended at minimal cost and to our huge relief. Problem solved.

We decided we may as well eat in Hobart while we were there. Using our newly renewed internet access we located a fish restaurant called “Fish Frenzy” which was right on the rather swanky harbour front. We had seafood plates containing a lot of fish we had never heard of and some excellent scallops. The waiter was a young lad who had actually spent an entire month in the Czech Republic and seemed genuinely thrilled to meet us.

Afterwards we took a stroll around the harbour and topped of our evening with a veritable fiesta of chocolate indulgence in a café.

When we got back to New Norfolk our hostess told us again that we had been incredibly lucky with the weather. Even though the internet was working well, we could not manage check-in for the following day’s flight. We did, however, manage to confirm with Hana that we would all meet for our final dinner together.