To adjust the time on a clock, it is usually only necessary to twiddle a knob. The time on an iPhone will automatically reset itself to the nearest GSM signal (not always the “right” one, as we had found on the Nullarbor) but it does do it. The human body, on the other hand, responds to a number of external stimuli, regardless of arbitrary rules imposed by others and is slower to react. That is a long way of saying that, the next morning we were raring to go before, what was in Kalgoorlie, at least, 6 a.m. Quite what time our minds believed that was, 7:00, 7:45 or even 8:15, I do not know, but we thought we may as well set off. Kalgoorlie, literally thronged, at least by Australian standards, the previous evening was quiet and deserted as we wended our way out of town and to the road to Coolgardie.

An aside. When I was still quite young, I had on the wall of my bedroom, a huge map of the world. It was still predominantly pink, the then designation for the British Commonwealth. Most details were easily visible and it did bestow upon me and my brother, what was an unusually detailed knowledge of world geography. We knew where countries were and could almost always conjure up the capital city if asked. Australia was at the bottom right. I always wondered at the paucity of places marked on such a large pink space. Sydney, Melbourne and Perth were there of course together with Cairns and Darwin, all places on the coast. The only dots of civilisation in the interior were Alice Springs (which caused me to read Neville Shute’s book that seemed to be mainly about Malaya), Kalgoorlie and Coolgardie. Why all that rambling ? Well, about 40 minutes after leaving our motel, we arrived at Coolgardie – and thirty seconds after that, we left it. It had been considered significant enough to be marked on that huge map, it had stimulated my boyhood imagination and it was gone in the blink of an eye. Frankly, I was disappointed.

After Coolgardie, we returned to Route 94, which we had left the previous evening and which was now designated the “Great Eastern Highway”. The name aside, we were still proceeding westward and It would carry us all the way to Perth. It was bright sunshine but, so early in the morning, it was actually very cold. The sky was blue and the temperature, according to a gauge we passed, was only 9 ° C. Our first stretching stop served also as an opportunity to get some feeling back into our bodies and it was not until our “breakfast” halt in Southern Cross that it began to warm up a bit. We had then travelled slightly over 200 kilometres through yet another arid wasteland. Parts of it were designated as “National Parks”, but nothing seemed to be happening in the areas that were not parks either. There were not even any dead kangaroos. One constant companion that we did have was a pipeline running beside the road. To take fresh water to the goldfields and completed in 1903, this is the world’s longest pipeline for this purpose. A series of pumping stations and the effects of gravity meant that the water in my tea, earlier that morning, had probably come from over 560 kilometres away. Cheers !

In Southern Cross we suffered the rare disappointment of a breakfast that was not good, well Lucie did. Lucie loves her coffee and likes it so strong that it is sometimes easier to chew it than to drink it. Up to that point, the phrases “short black coffee” and “double shot” had been enough to get her what she wanted. Not so in Western Australia. The attendant listened carefully to what she asked for before handing her about half a litre of nasty, khaki-coloured, slush. She poured it on a plant outside. At least our yoghurt was semi-palatable.

A sort of motorcycling “ground rush” began to set in. We were keen to get to Perth, so we pressed on. The scenery became less arid and we entered what was obviously another area of grain production. The huge concrete silos reappeared, in some places these were decorated with huge, cleverly executed murals and “First Nations” designs. Our routine of interspersed stops to stretch and stops to refuel the Harley and ourselves continued, with one or the other every one hundred kilometres or so. The fuel stops were, of course, still primarily dictated by the availability of petrol. We were, however, quite definitely coming into a more populated area so when, in the town of Merredin, the garage/café did not look very appealing, we rolled sedately on through the town. As we came to the edge of town, I accelerated gently out of a bend and the open road ahead beckoned. I did not wrench open the throttle, I just let the speed rise, not in any way dramatically, just that lovely surge you get from a big, torquey engine. What I failed to spot, in the deep, dark shadows under a tree, was a Police speed trap. The next second, a cruiser with its light flashing was right on my tail. Cue a protracted dressing down from two big, beefy, provincial policemen. In their mirror-shades and stetsons, they resembled Rosco and Cletus from the “Dukes of Hazzard”. The less than humorous result was a written citation and a fine of 200 AUD, for exceeding sixty kilometres an hour in the town. We had achieved the less than startling figure of 81, about 10 millimetres before the end of the posted limit. Thank goodness we had not rented a Honda Fireblade ! The fine was a bit annoying, but pretty trivial when compared to the cost of Lucie’s cigarettes, so she did not bend my ear too badly. It would need to be paid in a Post Office and that, in turn, would have a whole little story attached to it. But that was still in the future.

Chastened (Yeah, right !) we headed onwards. Almost immediately, we met the police a second time. There was an officer in the middle of the road who directed us into a side road that ran parallel to the highway. We pulled in behind several cars that were slowly making their way through a checkpoint. The aim of the check was evidently to smell the breath of every driver, because one in front of was directed to pull over and a breathalyser was produced. When my turn came, I was simply gestured through, but I would not want to smell my breath either.

Almost unbelievably, a short time later, we came up behind our old friend, the huge load, still droning its way relentlessly westward. Fortunately, this encounter coincided with a long uphill stretch, that in these more populated areas, had warranted two lanes in the uphill direction. Overtaking was simple and we waved (figuratively) goodbye to that behemoth for the final time. 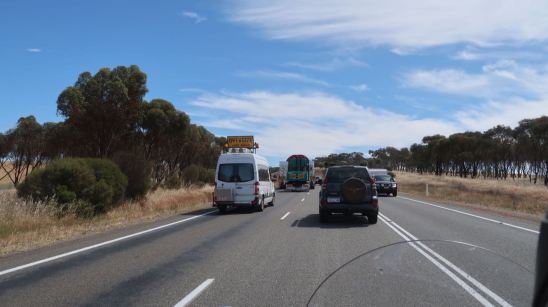 Slowly the volume of traffic began to increase. A lot of it was heading towards us and we counted a number of vintage American cars, obviously on their way to some gathering. There was also quite a number of motorcycles. We did pass a few “club” style groupings of BMWs and a couple of times Harleys, but it was principally the fast boys taking advantage of the endless straights. I hoped, for their sakes, they would keep well clear of Merredin.

The nearer we got to Perth, the hotter it became. We spotted one roadside indicator showing 33 ° C as we crested the final rise and began the long, slow descent into the city. The landscape on the final approaches to Perth was very beautiful, with mature trees, meadows, fields and even something that looked like the “weekend houses” we have at home. Finally, in the distance, the gleaming towers of central Perth came into view across a wide plain that looked greenish in the sun because of all the trees.

Sadly for Lucie, she missed a lot of that because, suddenly confronted by junctions where there were actually options, she had to concentrate on the navigation. There was also a lot of traffic. There were a lot of flashy cars and SUV towing enormous speedboats. After so long with so little traffic, it was a bit disconcerting. The last few kilometres seemed endless and my insistence in stopping to see and photograph the WACA (Western Australia Cricket Association) ground before seeking out the hotel did not enhance my popularity with my long-suffering wife !

By the time we wandered into the reception of the Mercure Hotel, she did look a bit frazzled and dishevelled. A bit like, in her words, a white member of the First Nations community.

We were in a city ! There were side-walks beside the road ! We celebrated by going shopping, oddly for dye, so Lucie could recolour her hair which had faded a bit in the fortnight or so on the road. Then we took gorgeous long showers and attended to our laundry. The former is discouraged and the latter almost seen as a crime in the water starved communities in the the wastelands. Many roadhouses have signs absolutely prohibiting doing the washing.

Refreshed and clean, we set out to enjoy the evening. It really did seem odd to be around so many people and, being in a city, passers-by no longer greeted us which also seemed strange. Perth is very cosmopolitan, the dining options were mind boggling. We were definitely in a part of town where Asian food was king and in Barrack Street, there was an endless selection. We finally picked on a quiet little Japanese style bistro, where we really enjoyed a wide variety of of small tasty dishes. Even at ten o’clock in the evening, the temperature was hovering around the thirty degree mark, so on our way home we stopped for ice cream. Bliss !

Air conditioning, water, WiFi – and television, we had it all. I have already mentioned that I really like the Australian penchant for straight talking. The media there is just as blunt and it can be quite hilarious. Back in England, the Brexit fiasco was still droning on and on. Boris Johnson had, it was reported, come up with yet another new formula for the Brexit agreement – but the British Parliament had summarily rejected it. The reporter relayed this to the (no doubt breathlessly expectant) Australian people with the immortal statement “Brexit is starting to seem like an endless soap-opera in which there are no good looking characters”. Amazing !