When we set off from Quorn, our first destination was Port Augusta which, somewhat perversely, meant heading south first as there is no direct cross route. Port Augusta, which sits at the top of the Spencer Gulf, would probably qualify as a city and, therefore, has no special characteristics or slogan. We withdrew some more plastic money from an ATM and had a good breakfast before heading towards the true outback. I love bacon and eggs and it is hard to get in Prague – luckily, the Australians understand it well.

In Australia, particularly in more remote areas, fuel can be scarce so we topped-up the tank to the very top, bought a couple of bottles of water and headed north on the A87.

As I mentioned earlier, we were now in the true outback. It was kilometre after kilometre after kilometre of absolutely featureless nothing. I could usually see to the horizon in both directions and there seemed to be nothing at all between me and it. Occasionally there was a sign on the hard shoulder indicating a change in the ownership of the wasteland beside the road. This was invariably accompanied by the presence of a cattle-grid and I soon learned to slow down when I saw one coming. Other, smaller signs pointed up stony tracks to the land-owning cattle-stations themselves. Some of the indicated distances seemed unfeasible until I remembered that some cattle stations are a big as the country of Wales.

It was over 200 km before we came across any semblance of civilisation and, believe me, applying that term to the rest stop and petrol pump at Pimba is stretching things. It looked pretty rough there, a horribly basic truck stop. It was a dour, gloomy place, enlivened only by the posted menu claiming to offer “Roadkill” and a sign which appeared to indicate that kangaroos could book SegWay tours at Uluru. Retrospectively, we were both pleased that we had been unable to book accommodation there for our return trip. A solitary, scraggy emu, pecking at the brush beside the road gave us a strange look as we turned north.

Pimba actually lies pretty close to Woomera, which is the site of the world’s largest inland missile testing range. It is certainly an area where you are unlikely to hit anything and damage it. It certainly appears no more, nor no less, devastated than everything else. Woomera, incidentally, is the Aboriginal word for spear-thrower. 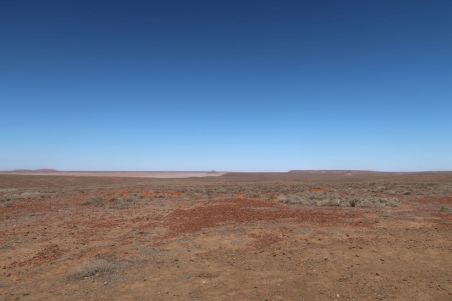 The next civilization was the roadhouse at Glendambo which was over 100 kilometres up the road. The advice is to fill up with petrol at every opportunity, so while Lucie went to book our room for the trip back, I once again filled up the Harley. No sooner had I done this than I was literally engulfed by a coach-load of Japanese tourists. Lucie returned to find me posing by the bike with a stream of pretty young girls, some of which even tried on my helmet. For some reason, I appear to be a magnet for such events as it happened very often on our trips to Asia. Lucie calls them our “Happy Buddha” moments.

We had lunch at the roadhouse, fish and chips for me again (!) and then set off for Coober Pedy. another 260 kilometres up the road. It is probably a matter of fine degree but, if anything, this was an even greater wasteland. Apart from the occasional car, there was nothing but the landscape. As we approached Coober Pedy, which is known for opal mining, endless piles of sand and machines for sifting sand and searching for opals did appear in the landscape. Even most of these looked idle and deserted. Several times, we noticed the abandoned wreck of a car beside the road. It seems evident that, in the event of a significant breakdown, it is simply not worth coming back for the vehicle with a tow truck.

Beside the road, in the stretches where there was some rudimentary vegetation, we began to encounter dead kangaroos. Not the odd one, here and there, but literally hundreds. There were often mangled corpses every 50 to 100 metres. In one stretch of 130 kilometres, I counted 103 dead where I could see them. They were in various stages of decomposition from skin and bones right back to “fresh” (and probably destined for the menu at Pimba !) I have mentioned that motorcyclists can detect passing scents, in some places there were so many of ripe corpses that the stench was appalling. The bodies provide abundant food for local predators. Crows abound and so do the majestic Black-Shouldered Australian Kites, hundreds of which rose from their lunch as we approached only to drop back down as soon as we had passed by. Lucie gleefully reported to “live” kangaroo sightings via the intercom but I was focussed on driving and did not see any.

In Coober Pedy, the locals told us that the kangaroos are very attracted by the lights of cars and road-trains at night. The fascination is so strong that they will stand on the road and watch what turns out to be their death hurtling towards them from as much as ten kilometres away. They are also very active at dusk and dawn and we were strongly advised not to ride at those times.

There had been no need to use Mapy since Port Augusta, there was one road and nowhere else to go. As we came to the outskirts of Coober Pedy proper, Lucie turned it on to help find the way to our accommodation. Paved road quickly turned to a dirt track that looked more like the entrance to a quarry than anything else. I really felt this was no place to be on a heavy, touring motorcycle. I considered turning back, but then I saw a sign for Jam B&B which was where we wanted to go. There was no sign of it though, as I manoeuvred gingerly around heaps of sand and some rusty mining machines on the loose surface of the track. Through the intercom, Lucie informed me that she really thought that this was a big mistake. There are the well-established stereotypes for B&B location and this was surely not one of them.

But then, we came to a side road that dropped steeply into what appeared to be a pit. The name of the Jam B&B was displayed there, together with a notice that only the cars of guests could enter. We stopped and were still staring into the abyss with disbelief when a cheerful Australian woman suddenly appeared next to us in a pickup truck. She asked our names and immediately told us that we had room number one. Lucie still was not keen. The slope, although concreted, was very steep and she no doubt remembered a similar incline that we had once encountered in Andalusia. It seemed that the more hesitant we were, the more excited the Australian lady became. In hindsight, I expect this scenario was a familiar one and she half enjoyed it. In the end I figured that if I could make it up the track on a Harley, I could certainly make it down that slope. I edged forward and rolled down. It had quite a sharp left turn at the bottom and the courtyard was a loose shale, but I managed it perfectly. Lucie walked down, followed by the lady in her pickup truck and so we found ourselves in the backyard of the house underground.

What a gem of a place it was. If we had given up or chickened out at the slope, we would have missed what was probably the most interesting of all the places in which we stayed. The courtyard had several holes leading from it into, what appeared to be, solid rock. These were not caves, some were doorways, with wooden doors and some are glazed windows. Behind the wall was a huge, hollowed-out, space from which you entered the rooms and various living areas. There was a sitting room and a shared kitchen for the two apartments (they were not just single rooms) on our side. In short, it was a completely normal house – but in an abnormal place.

We were quickly joined in the courtyard by the lady’s husband who, perhaps sensing our amazement, rapidly explained the benefits of such a dwelling, No repairs and no need for heating or air conditioning, Winter or summer the temperature within remained constant 22-25 degrees. Quite an advantage in the 50 degree heat of high summer, I imagine. It was, in fact, a totally unique and altogether wonderful place.

Our hosts were thrilled that we had come with a motorcycle. It seemed that, only a few days previously, some other guests had arrived with a 4WD Nissan, but had baulked at the slope and preferred to cancel the booking. I can accept that being at the top of the slope, looking down, is far more daunting than being at the bottom of the slope, looking up. Lucie believed she could have done it in her little Smart Car (the BAT M0BIL) and, in truth, she would probably have had more difficulty with the rutted dirt-track approach.

Most of Coober Pedy has unmade roads, many of them sandy tracks. Our hosts insisted that, when we went out for dinner, we should take their pickup truck. It was a powerful Toyota. It made short work of the slope and merely shrugged off any and all of the curiously surfaced tracks we encountered. In truth, I doubt I could have taken the same route into town on the Harley.

On the way into the town we soon realised that we were actually staying in an underground suburb and that there were many other underground dwellings around. The cars and pickups that we had seen parked by the holes between the heaps of sand did not belong to the quarry workers, but to the local inhabitants.

We ate at what was supposed to be one of the best place in town, the Opal Inn. Perhaps it was, but the food, although filling, was a little uninspiring and had to be ordered at a “cafeteria” style window, My beer was scarily expensive.

When we went outside, there was a distressing amount Aboriginal men laying around, all completely drunk. Sadly, it seems that some of them simply cannot cope with the 21st century at all. They receive welfare cheques from the government, but they spend it all on alcohol and sleep outside. Very sad.

We somehow found our way home, the Toyota dismissed the slope as insignificant and we encountered our hosts sitting in the Reception, which probably doubled as their kitchen. Although we declined their offer of some wine (Lucie does not drink alcohol and I am a low-life beer-boy) we still talked for quite a while. We learned that, in addition to the B&B, these two have another hole in the countryside nearby, a cherry orchard in Serbia and the male partner has a family in Switzerland, where he came from 45 years ago. The lady had come there 16 years before with her two and five-year-old sons, bought this home and stayed. They had recently been to Europe and declared it senselessly overcrowded. In the background, the music of Jethro Tull was playing softly. This was particularly strange as I had often seen the band, who at the time were quite unknown, playing in the pub next to my school, in 1968. The lead singer, Ian Anderson, loves Prague and often does concerts there. We had seen the “Fifty Years of Jethro Tull” tour not that long before and it was very odd to hear the same tunes again in a hole in the ground in such an out of the way place. 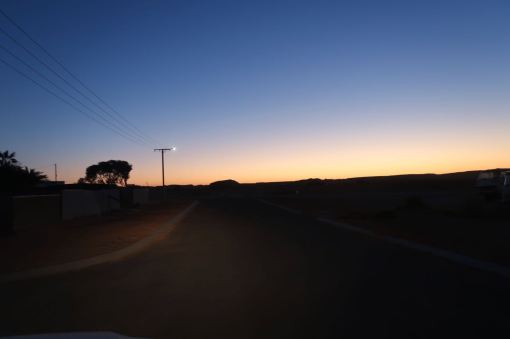 We retired to our underground chamber. Before we went to sleep we decided that, underneath the town name on the sign for Coober Pedy, it should really say “The underground city“.