No matter how pragmatic you try and be, it is a fact that we get older every day.

We do not realise it every day, of course, but bit by bit we slow up. Things we could once do easily get harder, take more time, make us ache or, worse still, seem to be such a hassle that we just do not do them.

Travel is a good example. I am a lifelong itinerant and since I was very small indeed, it has proved beyond the capabilities of anyone to keep me in one place for very long. The call of the far horizon has always been far too strong. I am not talking about two weeks on a beach here, but the interesting travel that, nowadays, gets labelled as “adventure tourism”. This can be fairly arduous and indeed that is often the point of it, or at least a large part.

I have never been one to lounge on the sand by the sea. I will admit to once spending two weeks at Ayia Napa in Cyprus, but even then I spent the majority of the time anywhere but the beach and took every opportunity that I could find to explore other parts of the island.

My favourite kind of break is to do stuff which I know would never cross most people’s minds and to be in places that a majority of people could not find on a map.

A motorcycle has always given me a means to indulge what is almost a mania. If you have one and a Passport, you can go where you want, when you want and the only people you are beholden to are hoteliers and petrol pump attendants. In my youth, when sleeping beside the road did not seem to be a problem, only the second group really mattered.

Time moves on and it is, in truth, quite some time since I woke up in a field and had to think for a moment as to where I was. The travel “bug” however remains alive and well and I am fortunate in having a lovely wife, Lucie, who not only enjoys travel herself, but is also prepared to put up with a level of discomfort to get off of the beaten track.

Together, we have done a number of relatively “interesting” motorcycle expeditions in Europe but I had long nurtured a dream of a seriously big trip “down under”.

There is a series of programs on my satellite tv that feature a biker named Henry Cole. Called “The World’s Greatest Motorcycle Rides“. Henry’s exploits have long served as an inspiration to me to get off of my bum and do some “serious” riding.

One trip Henry made was from Sydney, on Australia’s eastern coast, down to Melbourne on its south coast and then all the way to Perth, on its western one. This involved some scary distances by European measures and a lot of fairly tough riding. It was my plan to use this as a basis for an even more extensive adventure for Lucie and myself.

Henry Cole rode from Sydney to Melbourne and then all the way along the bottom of Australia to Perth. There he left his bike and flew home.

Lucie and I have two sets of friends in who live in Melbourne and another good friend in Prague, where we live, who comes from a small town in Victoria nestled in the hills immediately behind it. We wanted to rent a Harley-Davidson and our initial plan was to retrace Henry’s steps apart from a side trip to Uluru (Ayer’s Rock) and visit our faraway friends.

Once we discovered that Eagle Riders did not have an office in Perth and the cost for “repatriating” the Harley was not insignificant, we figured we may as well ride it back. This led to the plan which I had originally developed being modified and with the bike being returned in Melbourne.

The best time to do the trip, according to our research, was October which, in the antipodes, is early Spring. We booked the flights and hired the bike.

I have previously mentioned that most capricious of my lady friends, Fate. She has not done with me yet !

Throughout my life I have always enjoyed excellent health – but in mid-August, 2019, only six weeks before our flights, I suffered a severe “blip”. Without being melodramatic, I ended up spending a week in hospital after suffering two small embolisms in my lungs. A “wake-up” call if ever there was one to the fact that I am no longer twenty-one.

Fortunately, medical care in the Czech Republic is excellent and I was told we could still travel providing I exercised a bit of caution. I was taking blood-thinning pills (rat-poison) and I would need to wear elasticated stockings (ooerr !) for the flights. The most important thing, however was not to sit too still for too long. A six-hour, non-stop ride from Salzburg to Prague was held to be a contributory factor to the embolisms. This meant getting up and walking around every hour or so on the flights – and stopping every hour or so during our ride.

No problem then. We packed our bags ! 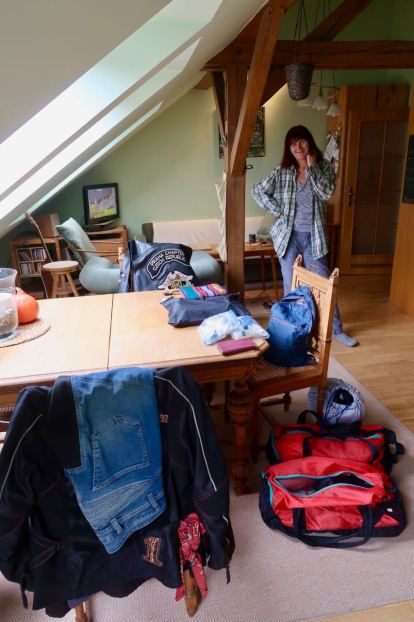 When you travel so far in an aeroplane, it is soon very difficult to say what time it is.

We left Prague in the early afternoon on a huge Emirates Airbus A-380. The first part of the flight took a mere 6 hours, but Dubai is two hours ahead and so it was after midnight by the time we got there. Sydney, our destination, was a further six hours ahead, meaning they were just getting up.

The second flight was to be thirteen hours, meaning we would arrive in Sydney in the evening, The necessity to get up and walk around meant I had not slept (as I usually do), nor would I be able to. It was going to be a long day.

Fortunately, the first Emirates flight to Dubai was almost comfortable because there was a free seat next to us, so we stretched out in a row for six hours. The food was good (!!) and the in-flight entertainment was excellent. We each saw two movies, even though Lucie fell asleep.

After completing all the formalities in Dubai, we only had about an hour before boarding our second flight. So we decided a coffee was in order. If you have read about any of our previous trips, you will know that the one thing that always seems to plague us is problems with our payment cards. Considering that I once worked in a bank, in card services, this is completely embarrassing. I also think there may be a suspicion that I am making up our problems. Sadly, not so. The bulk of the funds we use for travelling, are kept in two UK Banks, for which we have cards. During our travel preparations, we discovered that these had, at some point, expired and required replacement. This, in turn, for reasons I could not understand, also necessitated new PINs. The whole process had taken a month and had needed countless telephone calls.

Of course, when a PIN was required in the airport coffee-shop, I could not remember either of the “new” ones and, worse still, I could not remember where I had “secretly” stored them. Lucie was less than impressed that I had to pay in dollars and it looked a bit like our classic scenario of a pocketful of unusable plastic was about to repeat itself, yet again ! This did not bode well. Of course I later claimed that it was drowsiness and fatigue that caused the problem, Fortunately, when Lucie stopped cursing and was able to compose herself, she remembered me showing her where I had stored the PINs. I used the cards to buy her a second, celebratory, coffee ! 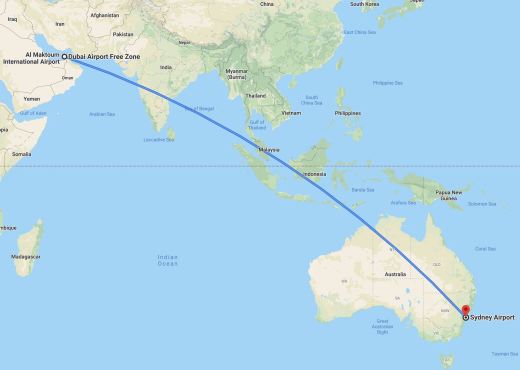 The second flight did seem endless. At some point, I suppose, it “became” Thursday, but I am not sure when that was and I do not suppose it really mattered. There was more good food and an easy supply of liquids and, despite myself I did sleep a bit. The previously lauded in-flight entertainment was just as good and it helped kill the hours. At one point I noticed Lucie looking puzzled and found that she was watching her movie with my headphones on. Apparently, her film was so confusing that it did not really seem to alter her understanding. 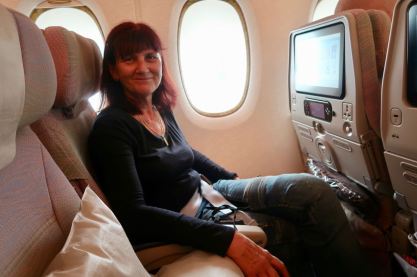 I am not totally sure of the route we took, I imagine we passed over Indonesia at some point, but it was too cloudy and we were flying too high to make anything out. According to the display, we did make landfall in Australia more or less over Perth. That means the map above is not strictly accurate, but I could not persuade Google to “bend” the flightpath ! Then we flew the length of the continent, which even in a ‘plane took quite a while. Out of the windows on our side was an endless sea of dusty brown and, on the other side of the aircraft, the blue of the Southern Ocean was plainly visible. I was acutely aware that we were probably flying almost directly above where we would soon be riding.

We finally landed and immigration was comparatively simple. Two Passport Control officers did consult over my photo – but they both smilingly agreed that it was a dreadful likeness. This was our first taste of the general easy-going nature of the Australians. Make no mistake, it was obvious that if we had been caught out, they would have come down on us like a ton of bricks, but they could see we were on the level and the welcome was genuine.

We were a little concerned over Customs. Lucie is a smoker and the amount of cigarettes you can bring with you is not only small, but the wording of the limit is a bit ambiguous. We admitted to having one hundred, fifty each, which we thought was permitted. The Customs man told us this was a little over (about 100%) and then waved it off. They did not want to see anything and they did not ask to look in our bags.

Revelling in our correct PINs, we got some plastic money from the airport ATMs.

We decided that, in the instructions they had sent us from our booked accommodation, the trip by train or subway looked not only the cheapest, but also the fastest and very simple. Surprisingly, it was. The public transport was smooth and efficient and we easily found our accommodation in the Napoleon “serviced apartments“. It was roomy and with two balconies. We had been a little worried that the location, directly under a big road would be a bit like living under the highway, but it was both quiet and pleasant.

Our bodies were slightly confused. Although it was late evening, our metabolisms thought it was lunchtime. All the travel had made us both very thirsty and I was longing for a beer. We went for a short walk to “The Sussex“, a nearby bar, where we enjoyed good, but (by Prague standards) incredibly expensive drinks. On the way back we bought milk along the way so that I could have coffee and tea.

Sydney looked incredibly clean, at least in our neighbourhood. There was not a single piece of litter or garbage on the ground and, especially, no cigarette butts. Food prices were not moderate, but were probably comparable to other large cities. The only thing we could not solve, due to the lateness of the hour, was a local SIM card for the internet. All the Australians we encountered were friendly and cool.

Back in the apartment, I fell asleep sometime between putting my head back and it actually coming into contact with the pillow.