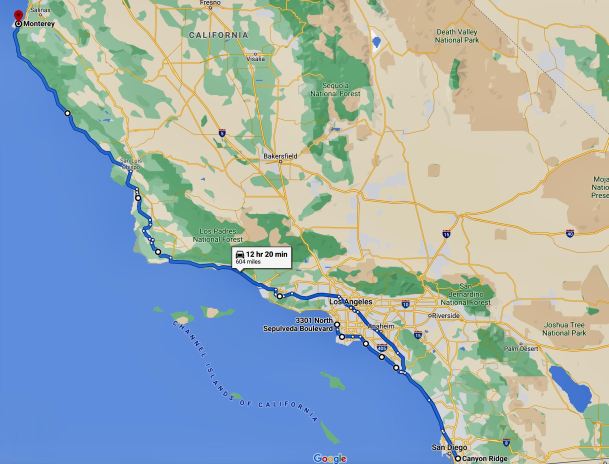 I am one of those people that really need a “purpose” to motivate them, so I suppose it was quite handy that my new goal in life was to ride to San Diego in order to see some trees that were not there. Or maybe to not see some trees that were not there. You work it out. Anyway, with Route 66 now relegated to the “done” pile, I was quite glad to have something to occupy my time while I decided what to do with the rest of my holiday.

I checked out of the Manhattan Inn and, as no breakfast seemed to be on offer at the motel, I rode the Harley south down Sepulveda Boulevard, which was also handily Highway 1 until I came to a cafe where I had a small breakfast.

Then, to be blunt, I just stuck to Highway 1. As I have said before, in Los Angeles the freeways ARE the way to go, but I thought that as I was on another, more than slightly, iconic route, I may as well use it for as far as I could, so I studiously ignored the blandishments to head to and to use, the I-5 and hugged the coast as I trundled slowly south. There were some fairly nice views out over the ocean, which was a beautiful blue in the bright sun. From my elevated position on the cliffs, it was clear enough to see the island of Catalina about fifteen miles out to sea and the white wakes of various small craft in the water between myself and it.

The way read like extracts from a Harry Bosch novel. I passed slowly through a series of “beaches” familiar from the California of literature, Long, Huntingdon, Newport, Laguna and so on before finally being more or less obliged to join the I-5 Freeway. A short way along this, after a place called San Clemente, the road seemed to finally leave the endless conurbation that is Los Angeles and head into more open country for around twenty or so miles before plunging back into suburbia at the town of Oceanside. As I began to near Oceanside, the land to my left, according to various signs, was largely part of Camp Pendleton where various branches of the US armed forces were probably “exercising”. At one point I did, I think, hear a few large bangs that may have been artillery of some kind.

I actually found my goal fairly easily. It was in a part of San Diego called Canyon Ridge and one good thing about the presence of so many “service” people was a preponderance of good, clear signposting. I did have an SMS description of how to find it and that, together with the signs, made it simple. I found the property and did not see the trees which, after all, was why I had come there. I reported their absence to my friend in Virginia and we more or less agreed I would come there to see him. Until that point, I was half considering riding all the way up the west coast, but cross country it was now going to be.

Another place I had sort of promised myself to visit was Death Valley which was, by then, quite a long way further north. There was not anything I wanted to really see in San Diego and leaving the bike somewhere for a quick trip into Mexico did not really appeal to me. I had specifically said I would NOT be going to Mexico when I hired the Harley so I dare not ride it across the border. There is apparently, a good zoo in San Diego, but hey, I grew up near Whipsnade Park in England, which was possibly the world’s very first “natural” zoo. I relocated the I-5 and set off north.

I decided to head, for no real reason, towards San Francisco, as I then had what turned out to be the erroneous impression that this was “near” Death Valley. It was certainly nearer to it than where I was, but near was not a correct description. San Francisco was close to six hundred miles away and, as it was after lunchtime already, I could see no real chance of getting there before dark. I set off north on the I-5 and, within a couple of hours, I was passing back through Los Angeles as swiftly as the heavily congested interstate would let me. At least, on that road I was moving and did not have to keep stopping. Near Toluca Lake, I encountered Route 101 which headed west towards the coast and was billed as the Ventura Freeway. I wondered if it had served as the inspiration for the Ventura Highway in the song by the group America. It still wound through fairly built up areas and it was about sixty more miles before I came to Ventura which was on the coast. I followed the 101 around the coast. This was truly beautiful scenery, the ocean on my left stretched unbroken as far as the eye could see. In the late afternoon sun, it was an endless vista of blue. I passed the famous town of Santa Barbara and, at Las Cruces, somehow contrived to miss my intended turn onto Route 1 and had to continue on Route 101 to San Louis Obispo where I did manage to rejoin it. 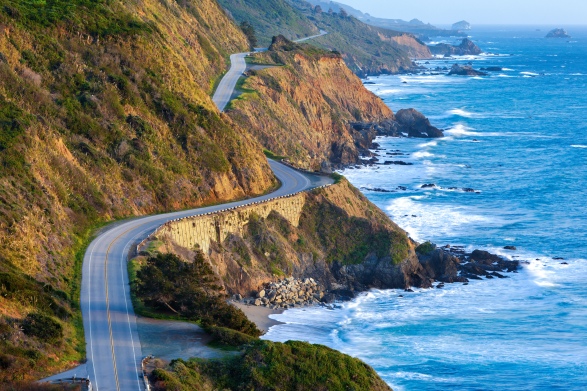 The route again led right up the coast and passed through the achingly lovely area known as Big Sur. Please note that, as I did not have my camera (see next post) the photo above and the one that tops this post are not mine. Eventually, as it began to get dark, I came to the town of Carmel. This was an astonishingly lovely town and was a bit like stepping back into the past. The main street was thronged with swanky restaurants and upmarket looking boutiques. I later learned that the actor, Clint Eastwood had been the mayor of Carmel in the late 1980s.

I had hoped to stay in Carmel, but it had an expensive feel to it and, anyway, almost before I realised it, I had entered the next town, which was Monterey. A sign for motels led me off of the main road and I elected to stay in the Monterey Pines Inn (1298 Munras Ave, Monterey, CA 93940) which was a tiny bit pricey, but which looked (and turned out to be) very nice.

When I got off of the Harley, I realised how tired I had become but a glance at the odometer revealed I had ridden over six hundred miles. I checked in an then ambled the short distance to the Chopstix Vietnamese Restaurant (1244 Munras Ave, Monterey, CA 93940). I ate some things that I had never heard of that were, nonetheless, interestingly spiced and very tasty and I treated myself to a couple of beers.

It was a balmy evening and part of me would have liked a stroll. Sadly, I could hardly keep my eyes open long enough to get back to my room and almost fell asleep in the shower. It goes without saying that I went out like the proverbial light as soon as my head hit the pillow.