Unusually, I slept a bit late and I woke up feeling very lethargic. I had eaten way too much the night before and I felt slow and bloated. Breakfast felt unthinkable. I could quite easily have gone back to sleep, conceptually at least, it was not going to happen. I drunk a couple of cups of the complementary coffee and checked out of the Motel 8. Outside, I waved a thankful goodbye to the (still) unexploded fireworks store and hit the I-40.

I was not really feeling up to just droning along the Interstate and neither did I feel like trying to re-seek (is that even a word ?) out the Old Route 66. So, when I came to Clines Corners, where the I-40 crossed Route 285, I arbitrarily turned right, hoping to make some kind of interesting loop. According to the signs, I was heading towards Encino. I had once seen a film about a thawed out caveman, called “Encino Man” and maybe it was that which prompted me to make the turn, who knows ? Although I knew that the Encino in the film was the one in Los Angeles, I also knew Encino was the Spanish word for Oak tree and I thought I might just find it and sit under it as the day was already heating up.

Of course, there was no Oak tree to be found, it was just a tiny town, I do not know if they have villages in America, that was lifeless in the bright sunshine. The only living things I saw was a couple of mules sleeping in the shade. I rolled on through. This was an extremely rural area. There did seem to be a few farms, but no people or visible livestock and the roads were narrow and poorly surfaced. At the slightly larger next town of Vaughn, I had very little option but to take Route 54 upon which my old stomping ground of Santa Rosa was indicated. 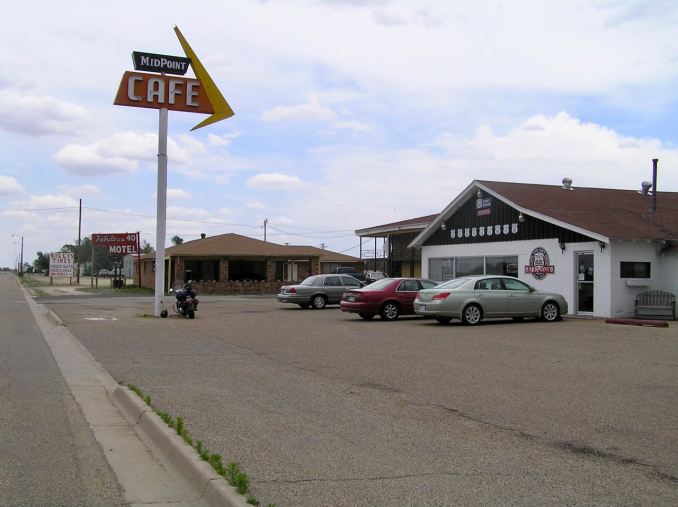 Trekking around rural tracks was getting me nowhere slowly so, at Santa Rosa, I again took the I-40 and restarted my drone eastwards at a slightly increased speed. Although it was very hot, there was quite a headwind and, including a stop for petrol for the Harley and some water for me, it took over two hours to make the trip between Santa Rosa and the Midpoint Cafe in Adrian. When I sat down for my lunch, it was mid-afternoon. I still was not very hungry, so I contented myself with an omelette. Two memorable things then happened one after the other. Firstly, the waitress asked if I had been in there before and, when I replied in the affirmative, she said she was glad I had, because she thought she remembered me and she had made a bet on it with the other waitress. A brief conversation ensued and, when she found out I was from Europe, she got quite excited. A few moments later the boss, not the waitress who had already waved a $5 dollar bill at me with a big grin, came and presented me with a Mid-Point Cafe baseball hat as a souvenir of my visit. They are nice people there !

As I paid and left, a big group of about a dozen Harleys pulled into the car-park . They looked like quite a scary bunch of people with their predominantly long-hair and “cut-off‘ vests over their jackets. But, as they dismounted, I was quite surprised to note that the Club Colo(u)rs displayed marked them all as “Bikers For Christ”. As a man (and woman) they greeted me with genuine warmth. Biker style pleasantries were exchanged and, when they found out I had a long journey in front of me, they asked if they could pray for me. I always say you can never have too much help, no matter what the source, so I agreed. They formed a circle around me, joined hands and prayed out loud for God to take care of me. Do not forget this was in a car-park on a Monday afternoon. Then they all shook hands with me in turn, giving me an individual “Bless You !” as they did so, before departing inside with a cheery wave. I resumed my journey eastwards, probably in my own, personal, beam of sunshine. 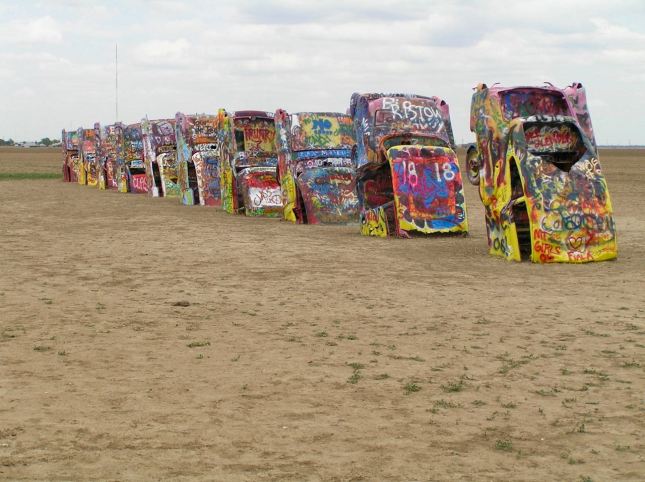 After about 50 miles, as I approached Amarillo, I came once again, to the “Cadillac Ranch”. This time I stopped and took a walk to where the long line of once luxury automobiles were buried nose-down in the earth. It is strangely evocative and more than a little weird. I suppose that, if I had to ask its creators what it all meant, it would imply I “did not get it”. I did not. None the wiser, I took a picture or two, for posterity if not for artistic appreciation purposes and moved on.

Another hour or so brought me back to Groom. The huge cross beside the road was actually visible from miles away. I was at a loss to understand how I had been almost past it before I even saw it on my outward journey. It was lucky the “Bikers For Christ” had not known about that previous oversight or I would still have been standing in their circle !

A short distance further on, the famous water tower still leaned precariously into the wind, I wondered if that was the only thing preventing its collapse !

I continued upon my merry way. It might have been the headwind, which was still strong enough to be noticeable, or it might have been a bit of travel fatigue after two solid weeks on the road, but it all seemed like unusually hard work. The Fat Boy just kept running smoothly. I always say that it is the lack of mentions that whatever I am riding gets that is the real testament to its qualities and that was very much the case here. For two weeks I had periodically thumbed the starter button and ridden it all day. It was stable and comfortable and everything I wanted. It was as economical as I could hope for, it used no oil and it had a nice screen that kept me out of most of the elements. The screen, which had kept a lot of me dry in the Missouri rain, now deflected most of the flying dust that the gusty wind was blowing off of the surrounding farmland.

It seemed to be a day for progressing in “hops” of fifty miles or so and the next fifty ticked off as I approached Shamrock. I left the I-40 and found the iconic “nail” shaped Tower of the Conoco station again. I have heard that, in the intervening years since I did the ride, travelling on Route 66 is enjoying a renaissance and that a lot of the “sights” are being restored to their former glories. Encouraged, I was told, by a progressive and forward thinking mayor, the Tower petrol station and the attached “U Drop Inn” cafe (111 U.S. Rte 66, Shamrock, TX 79079) were well ahead of that curve. In the sunshine, it did look truly stunning. Sadly, the cafe, which looked (through the window) just like I imagine it did in the 1950s, was not open. I sat for a while on the bench outside in the late afternoon sun, mercifully out of the wind for a bit and then I moved on again.

About fifteen miles out of Shamrock, I crossed from Texas into Oklahoma and immediately lost an hour as I left “Mountain” time and entered the “Central” time zone. Travelling a long way in an easterly direction does, effectively, shorten the day and I guessed I had better start looking for somewhere to spend the night. Another thirty five or so miles went by and, as I approached the amusingly named Elk City, I noticed a hoarding for a Super 8 motel. Why not ? I thought. How easily we fall into a habit.

I followed the signs and found it easily, Super 8 Motel Elk City (2801 U.S. Rte 66, Elk City, OK 73644). It was already quite dark when I pulled into the car park, which was crowded with, what looked like, vintage pickup trucks. There was a long line of them, many immaculately restored, gleaming in the light of the courtyard lamps. I supposed there must be a rally somewhere nearby. Luckily, there was still a room, and I gently eased the Harley into a gap between two trucks outside of my door. A closer examination revealed them to all to be “F” Series Fords almost exclusively from the late 1940s and 1950s. The one right outside my door was a very early van variant of the F100, proudly displaying a little sign saying it was from 1948. It was beautifully restored in period colours of red and white.

As ever, I walked somewhere for my evening meal and I could see a place just on the other side of the elevated I-40. It was an Italian place, Roma’s Restaurant (2700 E State Hwy 66, Elk City, OK 73644). It was pretty crowded and I guessed a lot of the cowboy hatted and booted patrons, were the pickup drivers from my motel. They were a friendly bunch and certainly seemed to all know each other. There was quite a party going on ! I love pizza, so I had one and, in all honesty, I do not think I have ever had a better one, not even in Italy. It was light, crisp and simply melted in the mouth. It was quite spicy, too and I washed it down with a couple of beers.

I retired to my room and, as always, was asleep in seconds. I did get slightly disturbed a couple of times by the return of some of the other, more raucous, patrons, but not unpleasantly so.