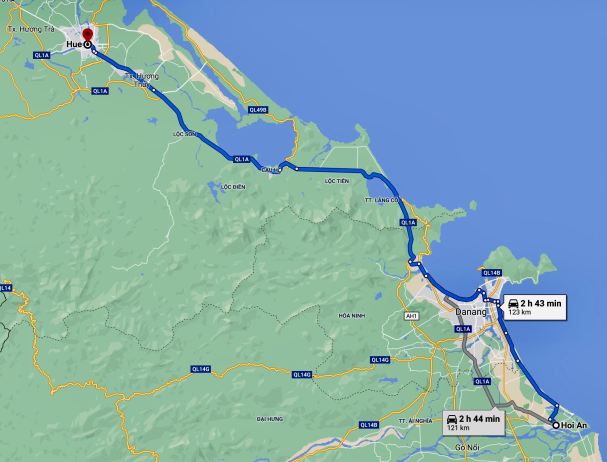 We found out that day that, at home in Prague, it was ten degrees below zero. I spoke to my sister and her husband on Skype and she said that they said they even had snow. I expected it to be colder in the north of South Vietnam (or, perhaps, in the south of North Vietnam), but it was not.

After an almost emotional farewell from the hotel owner, we left Hoi An in the morning on the final two-wheeled stage of our journey. 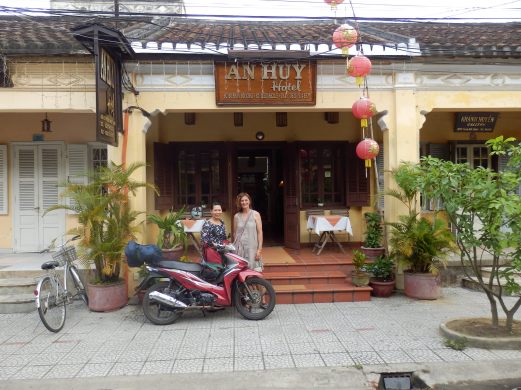 After the first forty kilometres, during which we passed Da Nang, the site of a huge American naval presence in the Vietnam war, we took a short break. But without much delay, we drove on. The road then crossed the Bach Ma National Park, where it was very cloudy. Because we were so high up, we saw everything below us through the clouds. 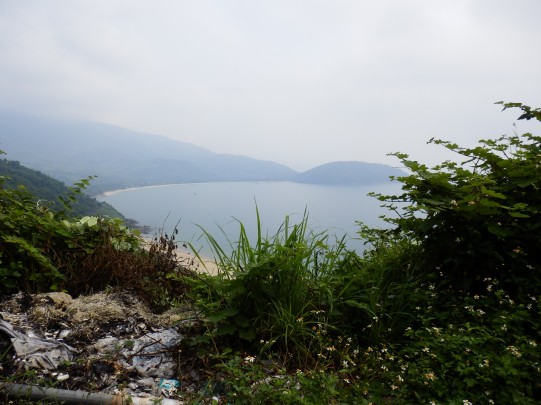 Almost as if there was some invisible dividing line, the crossing of the park took us into a noticeably different climatic zone. Although in a Vietnam War movie it always looks more like a rainforest, the park was almost a jungle. But, no sooner did we exit the park, than it was obvious that we had entered a totally different zone. Everything was a shade darker, the trees, the general vegetation, even the stalks of the rice.

The houses too, altered. There were some huts, but also far more substantial looking colonial-style houses. This was also an area of distillation, presumably for alcohol. Everywhere there were boilers, either beside the road or moved, on their little wheels, to stand in front of the houses where many had an open fire blazing underneath them. There were so many in some places that the air smelled quite fruity. 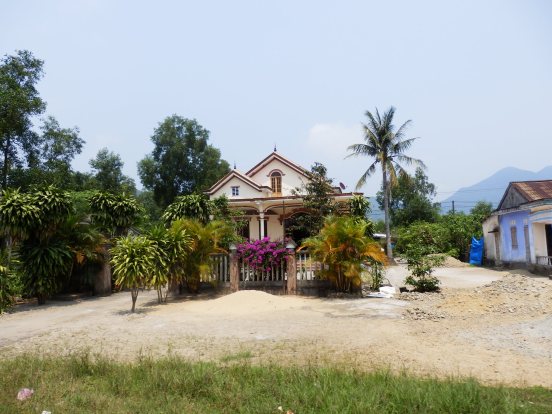 The going was very slow because of the steep inclines and, at one point, on a log hill, we began to ride through air that was full of small, blowing feathers. Many kilometres later, we finally found the source, a lorry loaded with crates of ducks ! They all looked at us inquisitively with their long necks poking out between the bars of the crates. The smell of them was appalling and we were glad that at least we were able to go fast enough to overtake.

The sea, which had been visible for most of the morning was about to fade out of sight so, as the last farewell to the beaches, we stopped and took a few pictures. 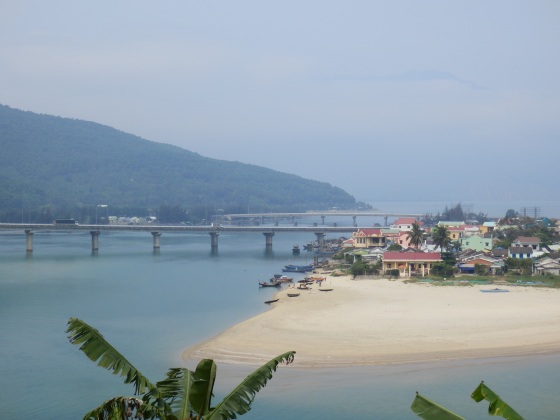 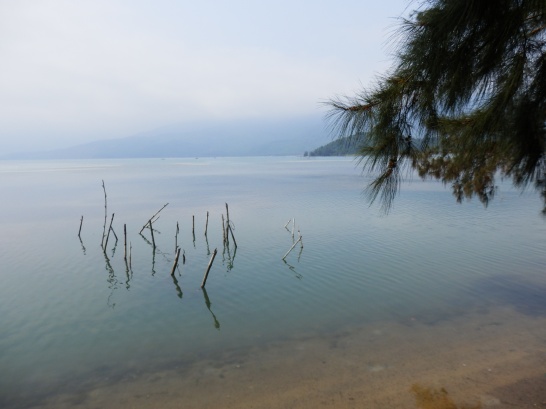 Then we chose ca phe by the road, where they had a sign proclaiming “beef soup“. The male half of the couple that was running it was well over seventy years old and claimed he could remember the Second World War. Although we had eaten breakfast before leaving Hoi An, I was hungry and so I ordered soup for us. It was a real homemade broth, in short, just as it should be. The owners soon brought it to us, in little bowls, together with dishes of various spices, a plate of mint and cups of iced jasmine tea. I was barely in the middle of my meal when I sipped a handful of pepper or chilli from the bottom of the dish and completely lost my power of speech for a moment. I think I probably broke my personal record for eating soup with chopsticks. David, of course, sought out and ostentatiously chewed on his chilli without comment ! 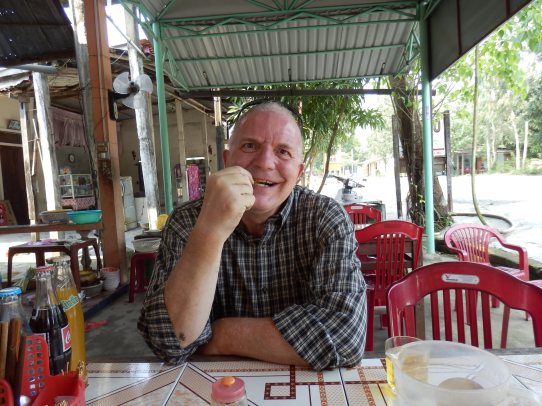 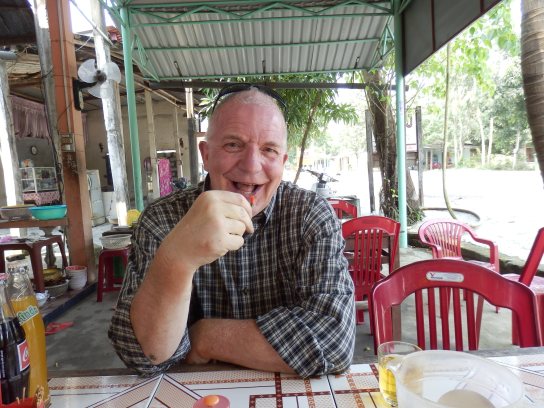 As we began to approach Hue, there was quite a lot of traffic which we eventually found out was caused by roadworks done the Vietnamese way ! That is, whichever vehicle is the biggest has priority and heaven help the moped riders ! 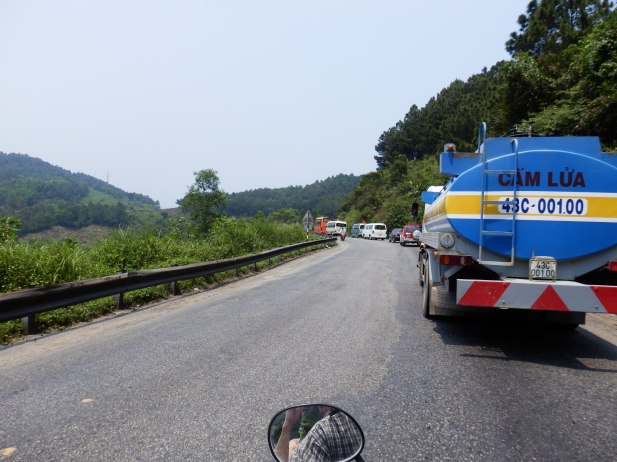 Finally, we descended back towards the sea and ran through huge fields of rice on the coastal plain. 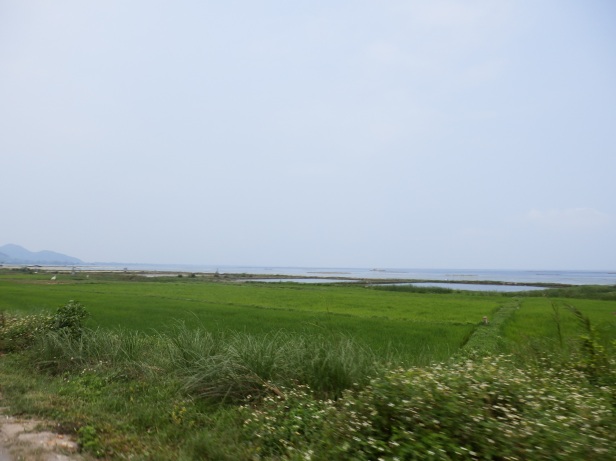 Even though we had stopped for lunch, we still arrived at Hue station at about a quarter past twelve. David went to look for information, but there was no helpful woman there, only a male cashier in the ticket office who just shrugged his shoulders.

Fortunately, a guy then approached us and introduced himself, in English, as Mr Pho. He was apparently the local tourist “guru”. Mr. Pho seated us in the snack bar and scurried away to the Luggage Office to arrange for Minh to be transported back to Ho Chi Minh City. In the confusion, Minh was whisked away and was gone before we could really say goodbye. I felt a bit sad about that.

We then had to wait for over two hours for the the lunch break to end so that we could put Minh’s papers and key into an envelope and send them separately with the shipment paper. We had some good coffee with Mr. Pho and, advised by him, we pre-ordered the preparation of food and drinks for the trip on the train. It seemed to us a good idea, we did not need to think about it at all and we could just pick it up before we started our journey.

Mr. Pho told us his family had been helping as tour guides for three generations. His grandfather had worked for a Frenchman at a hotel and, when the first fighting started and the French had to pack their bags, he had bought the hotel from him. Mr. Pho had the hotel, the cafe at the station and, since no one else spoke a word in any world language at the station, he had a pretty good business there too.

A taxi took us from the station to the Hue Niño hotel. The Lonely Planet guide directed us really well there. It was a pleasant place down a small alleyway. In general, there is nothing to complain about in Vietnam in terms of service and the staff in that hotel exceeded the norm.

Our initial desire to simply fall onto the bed and leave tourism for some another time, or preferably for some other life, left us immediately after an invigorating shower. So, out into Hue we went.

The chief site of interest in Hue is the Citadel, so we went there first. There were some fairly interesting artefacts but, to be truthful, we were not particularly thrilled. 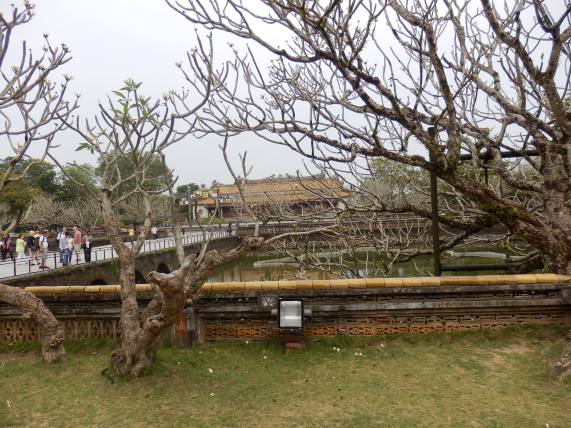 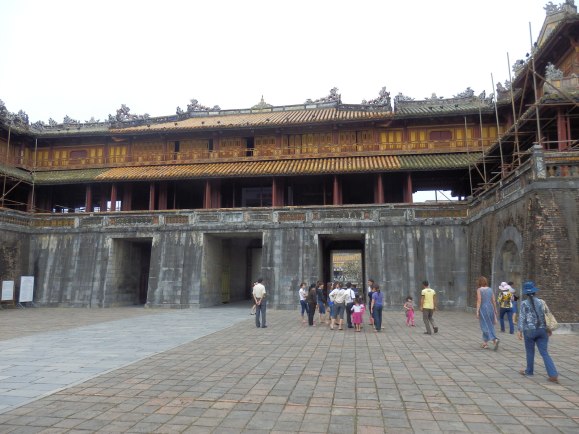 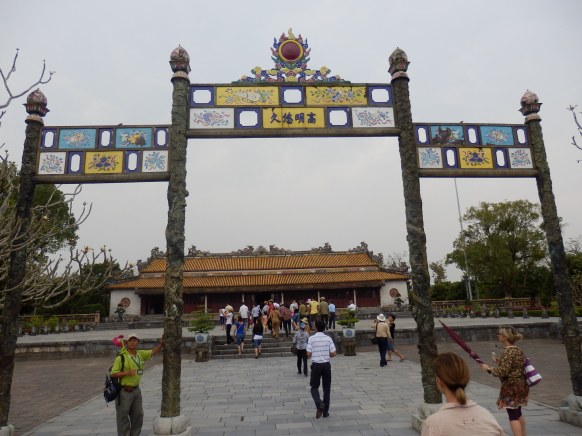 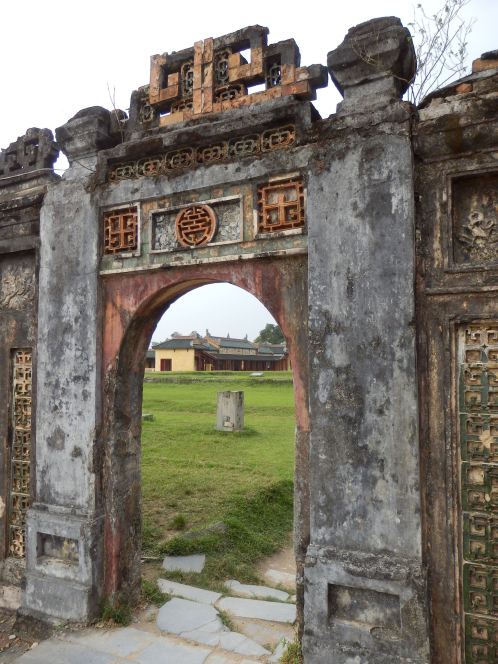 In addition to some artillery from the Vietnam War, there was an impressive line of much older cannons. For some reason I will probably never understand, one of the things that David always likes to do is to be photographed, staring down the barrel of a cannon. We Czechs call it the style of a “goose looking into a bottle“. David looked into a cannon, I took a photo and he was happy. I have done the same thing in countries all over the world and I half feel he would consider any holiday a wasted trip if he never found a cannon barrel to look down. 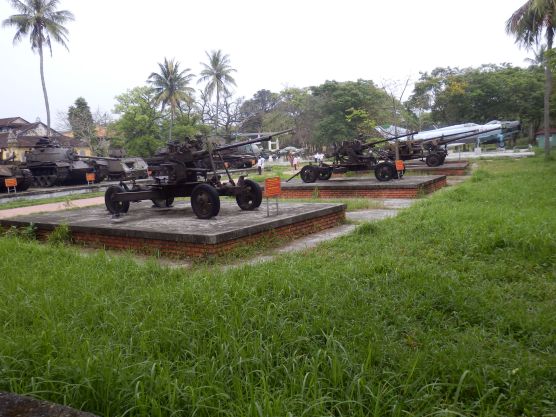 Next, we bought, ate and enjoyed some fruit we purchased for, what seemed, a sinful amount of money. It was a bit of a paradox that everything seemed expensive to us in Hue, when we were still talking about a whole pineapple for twenty thousand Dong (twenty Czech Crowns). In truth, it had become much more expensive, in Vietnamese terms, as we had moved further north. Coffee, from a stand, cost fifteen thousand instead of seven thousand and, in a cafe in the Hue city centre, even thirty-five thousand.

Hue was the biggest place we had been in for some days and the mass of people seemed strange. The communist ethos seems more strongly enforced in the north and big posters extolling Party achievements jostled for attention with motifs that looked like traditional architecture – but were not !

For our evening meal, at the hotel, they had recommended the Confetti restaurant to us. We walked there and it did seem very classy. However, right opposite was another place called Rose 2. The prices were the same, the tablecloths a bit tattier and the seating was almost on the sidewalk. It seemed, somehow, more “Vietnamese” so we went there instead. As it turned out, the staff was fun, the food was excellent and it had the cleanest toilets I had so far seen in Vietnam. Of course, the cutlery was chopsticks, so David ate half of his food from the table. In Vietnam, not even he would eat something that had been on the floor.

We wanted to go back out for a dessert later on, after another shower, but as expected, by eight we were more ready for bed than for the hustle and bustle of the big city. But David considered that finding me a dessert to be something like a knight’s quest to complete. He rejected my suggestion that I walk, by myself, to buy a bun at a bakery we had seen about a block from the hotel and insisted that he should come with me. When we came out of our hotel and through a couple of alley ways to the street, a place called Bloom Cafe fell right into our path. According to the trusty Lonely Planet (which we often call “The Loony”), Bloom is run as a training workplace for disadvantaged children and also organises cooking courses. Anyway, the desserts were very good.

Night fell suddenly and it was quite dark before we returned to our hotel.

Our room, this time small but cozy, seemed almost filled up after all those previous purchases. We took that shower and decided that, the next day, we would take a private tour of the area.

While laying in bed, before it was even nine in the evening, I wrote the words “We no longer have Minh, our trusty moped !”. The next phase of our trip was about to begin.