In the morning everything went well and we finally said goodbye to Vinh Long at around half past eight.

We crossed the river again, this time being VERY careful when we left the ferry !

Of course, no sooner had we left the town behind us than one of our mirrors suddenly began rotating on its own axis. It was very ironic that this could not start while were still in the town, where there were scores of motorcycle workshops, but waited until we had left them all a long way behind us. David is obsessed with looking in the mirror, he says it is how he has stayed alive so long and this made him quite agitated. It took a very long time and many failed attempts to prevent the mirror turning, before we did see a small repair shop. David claimed that a couple of minutes with a 10 mm spanner would be all he needed, but when I obediently brought one to him, he still could not fix it. The shop owner finally could not stand to watch any more so he came over, made a few touches on both nuts and it locked as if welded there. David probably will not like that last sentence ….

The journey continued without any other major experiences. We drove on the A1 motorway, where motorcycles were still allowed without any problems. We also easily located the necessary detour along the “old” motorway when we came to the new part of the A1 where motorcycles were forbidden. On such a little motorbike, it did take a long time to get anywhere and we had to take a couple of coffee-break stops before we finally came to the outskirts of Saigon. I took my, by then, customary recline in a hammock. David was still suffering quite a bit with his bruises. He was uncharacteristically quiet and lurked on a chair.

At our second stop, there was a moped parked which had a box full of big grasshoppers or possibly locusts on the back. Apparently people eat them ! We also contented ourselves with something very yellow – but this was a very tasty fruit that I could not identify. 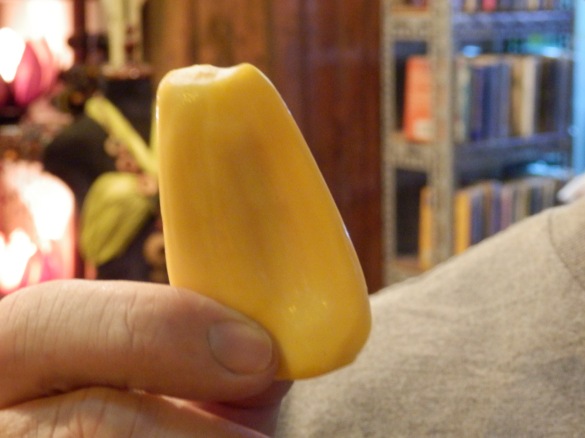 It might be worth pointing out that, although the city was officially renamed from Saigon to Ho Chi Minh City after the Vietnam War, almost all of the people in the former South Vietnam still refer to it by its “old” name. Because I had prepared and written down the instructions myself, I navigated David through the city. I was talking in his ear and, as he himself said, it was like having satellite navigation. Our destination was the main railway station and, if the station had actually been where it was supposed to be, I would have performed faultlessly. Sadly, at the point where the map had shown a prominent picture of a locomotive, there was no station to be seen. We were quite close though, to the point of being in the right street, although it was impossible to tell that. The Vietnamese people are all so helpful and it was only a few minutes before one noticed our confusion and, prompted by the train picture, guided us to our destination.

To try and make up some of our lost time, our new plan was to take a night train to either Thap Cham (ideally) or to Nha Trang. But, so much for that. The reality was that we first waited for an hour in a queue for tickets only to then learn that we had to buy a ticket for the motorcycle first. The separate office for the motorcycle tickets was supposed to be in the next entrance only ten metres away to our right. It was actually about fifty meters and twelve entrances away. At that window, they sent us even further away, but I refused to go there because it was outside the station. At the same time the local motorcycle taxi drivers kept shouting at us to push our bike away from where we had parked it. We could not quite understand why, there were motorcycles parked everywhere. But taxi drivers are just taxi drivers wherever you go and usually a nasty little “mafia” as well. We moved Minh safely around the corner.

We were at a loss as to what to do. The ticket staff had sent us round and round in circles for almost two hours and we had got nowhere. My last hope was to try the station passenger information counter where, at least, a small amount of English was spoken, if not wholly understood. The clerk resolutely assured us that there was no possible way our motorcycle would go anywhere that day and there was no chance until at least late the following afternoon. Overwhelmed, we went to the station cafe to try and come up with another solution.

In the end we decided that we might as well stay in Saigon for another night, preferably in a hotel where there was a good shower (for the last two days in Vinh Long, the water in our hotel had been resolutely cold). We could eat, sleep, work out some route and, maybe, accommodation options and leave early on the following morning. A train seemed out of the question as we would probably get farther if we went under our own steam.

I remembered that, near to our hotel from the very first night was a slightly more “luxurious” one. It was already evening and we had already proved capable of finding our first hotel in the dark, so we even had a fall-back option. On the way to the station we had experienced a real trauma, in particular a completely crazy passage through one roundabout. There were literally thousands of motorcycles and a few cars and about a tenth of the vehicles were driving in the wrong direction. Pedestrians were also frantically trying to step through the churning mass. It was not even rush hour then. Unluckily, we DID enjoy rush hour on the way from the station. There is really no word for it other than surreal. In both directions, on quite narrow streets, a column the width of thirty motorcycles. At the edges, people riding in the opposite direction, in two streams, milling pedestrians, some cars and, at the intersections, police officers who stand and switch lights manually. If that sounds bad, it was actually worse. I would have liked to have taken more pictures, but I had to hold the map in both hands and shout directions to David. All the time I had to hope I had it right, because it was impossible for either of us to read the street signs. David said he had to look in all directions at once, except up to the sky and he really wished he had two extra hands so that he could have held his head in horror. 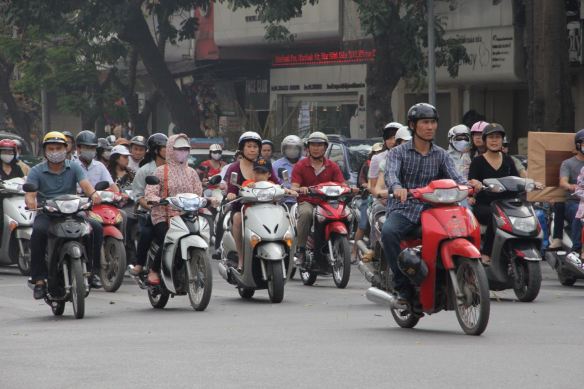 It seemed almost miraculous then and it still does in retrospect, but we found the hotel we wanted on our very first attempt. I hope that not to have to write that we got hopelessly lost is not too boring.

We secured a very nice room, although strangely, it had no windows which we were not totally keen on. In truth, the road outside was so noisy that this may, in hindsight, have actually been a bonus. We had a really great shower, the first proper one since we had left home, we popped out to eat and then we sat down and prepared written instructions for the following day. We were sort of back to our original plan, but already at least three days behind what was always going to be a tight schedule. We knew that, at some point, we would have to make some further adjustments to our plans, but that was in the future. The following day we planned to get up early and head in the direction of Da Lat.