I slept unexpectedly well and calmly, nothing seemed to trouble me and I did not want to get up at all in the morning. The room we had was huge and decorated in French colonial style. Once luxurious, it was, of course, more than a little shabby. It had a high bed and when I was writing my journal, in the dark of the previous evening, I wrote that “David can get up slightly better from that high bed“. I deliberately did not write that he could get up “well“.

The new day started with us evaluating the situation and I went to breakfast alone. The breakfast was served in the “garden“. The menu was classic tourist style, but it hit the bull’s eye for me with bread and iced coffee. When I wanted cold water to refill the iced coffee, the Lonely Planet travel guide, which only translates “hot water“, did not help. I showed it to the waiter and added the word “ice“, which was a word he that he did understand. Of course he brought hot water anyway. I poured it over the ice for coffee and he was satisfied. Later, David and I deduced from the inscription on a bottle how to say “water” without “warm“.

David originally refused to eat. His male logic dictated that if he ate nothing, he would not have to drag himself off of the bed to go to the bathroom. I still sent him a breakfast of fruit. It was a rather amusing interlude. The waiter understood that he had to take the breakfast tray to our room and guessed (correctly) that if he returned to me with a tray, I would send it again and force it on David. However, David was apparently forbidding him from entering, because he had no clothes on. It must have been quite a scene. In the end, I took it there myself and we shared some tiny bananas on the bed.

After considering the options, we came to the conclusion that we would not deal with anything until David was at least able to walk and then we would see. Some new plan variants were born in our heads, but it was already certain that we would be spending at least one more day in Vinh Long. David certainly was not going anywhere, he did not even want to, which indicated just how bad he felt. His ribs were horrible shades of black and blue but it was his knee that was the real problem. He suggested that while he stayed and had fun watching the ceiling for hours, (he later wanted to photograph it as a powerful Vietnam holiday experience (which showed his English sense of humour had returned!)), I should begin to enjoy the life of the local community. So I did.

I started with a coffee at a nice family house right opposite the hotel. It was a surreal experience where I did not understand a single word, except coffee (ca-fé). This is probably the only international word that is completely understandable in Vietnamese and a by-product of French colonialisation. Luckily for me, the ca-fé was amazing. I also went shopping again. This time I had a clear main task, to find bandages and pain killers. I thought I did not have much chance of finding an open pharmacy, in fact I did not really dare hope for a pharmacy at all. About halfway through my walk, I found a shop that sold long, wide rubber bands, so I figured that, in the worst case, I might use these to support David’s knee. Then, about two hundred meters further along the road, I found two open pharmacies and was able to buy both a bandage and some pain killers.

Out of joy, I immediately stopped at another house that was a sort of “unofficial” coffee shop that turned out to be owned by Mrs. Bá. A Vietnamese man who spoke about five basic sentences in English interpreted for me. He found out my name and how old I was. In return I was introduced to all three generations of the Bá family, the youngest of whom was fifty or fifty-five (counting on fingers worked somehow differently in Vietnam). Of course, I do not remember a single name and I was told a lot of information that I would certainly have appreciated if only I had understood it. What I did understand was that all the Bás were regularly meeting for coffee at this location and that I join them there for coffee from then on.

On the way home, I bought David a coconut, but the coconut seller somehow chopped it badly and the milk started flowing into my bag. I had no option but to drink the first coconut myself and to buy another one a bit further down the road. I also paid five Dong for some oranges and, for only three Dong, a good fruit that tasted a bit like an apple and water. Madam Bá had taught me that word for water sounded something like “Choong Choi”, but when I tried this out in a shop a few metres away, they tried to sell me shampoo and Pepsi Cola.

David was excited by my return and keen to know what I had been up to. We decided that, if he walked very carefully, he could probably make it for dinner outside the hotel in the evening. I think he was tired of the ceiling and of being lonely. So I bandaged his knee, helped him dress and we set off very slowly into the hustle and bustle of the big city. We were both happy that he could leave the care ward of his “hospital”.

After we had slowly limped a few hundred meters, who should we meet but Utseom, my grandfather driver from the previous day.

Now, we became his property ! I arranged a fixed fifty Dong for the round trip into town for both of us, which meant he had to come and go twice. Firstly, he took us to a place where we ate the chicken with rice, pickled vegetables and Pho, which was certainly very tasty. I was pleased to note that David, who has a strange, psychological aversion to chicken, at everything on his plate. 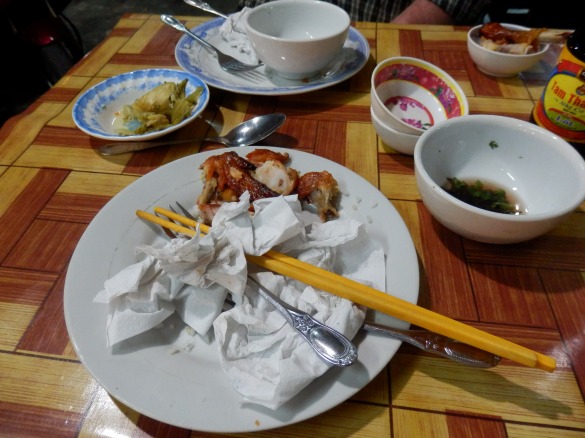 Then Utseom took us to a “friendly” cafe opposite, where he himself served us and also arranged a fixed price of only thirty-five Dong for four coffees and two teas. Admittedly, this was a very good price.

After returning home and saying goodbye to Utseom, I helped David undress. Then he finally took the picture of the ceiling that he had intended to take since morning. He also said something about the fact that the whole ceiling would not fit in the photo and that it would be better to take the picture of it while laying on the ground, which he could not do. I pretended not to hear this remark.

I tried to call my mother on Skype but the connection lasted only 38 seconds. The conversation with my sister was more successful, almost 10 minutes. I tried to avoid describing how we really were and assured her that we were really ABSOLUTELY acclimatised (as David said “we probably cannot be anymore acclimatised“), that my ass really did not hurt from the motorcycle (which was true, considering that every part of our bodies hurt us in combination) and that we had a beautiful ceiling to watch.

So that was the end of another day.