Our plan for Saturday was a bit challenging. The ultimate goal was to reach Vienna, where we would stay with some friends we had not seen for some years. They had deposited their two young daughters with a grandmother and we were looking forward to a longish evening of “catching up” and comparing notes about what we had all experienced since the last time we had seen each other. We did not want to arrive exhausted and we had at least four hundred kilometres to travel and two Hundertwasser sites to locate and enjoy.

Of course, even without an alarm clock, I awoke around five – so I went for a final stroll around part of the lake. When I returned at just before seven, Lucie was already awake and partially packed so that we could leave as soon as possible after breakfast. This time, we were the first people in the breakfast queue and secured an exclusive spot on the balcony – overlooking the lake. Finally!

We had, by then, mastered the complicated ritual with tongs and spoons and we enjoyed a peaceful and varied breakfast.

Just before nine we settled the bill which, for an Austrian hotel in a popular locale was a surprisingly reasonable EUR 254 including the breakfasts. We set off from Egg on the A11 motorway and quickly switched, outside Villach, to the A2 motorway having agreed that, this time, we would take the most direct and fastest route. Soon we were running along the northern edge of a truly vast lake, the Wörthersee

I have already mentioned, probably too many times, that either the SatNav has a mind of its own or I really do not know how to make it do what I want it to. Sadly, as it is actually a superb tool, I strongly suspect it is the latter. My feeling is that, with a SatNav, I may not have the faintest idea where I am, but I am not actually lost and I admit that I am a bit inclined to follow it slavishly. I had not done a lot of research on the first location, but I did know it was somewhere in the countryside. For this reason, when I was directed off of the A2, I left the A2.

I will say immediately that, within the boundaries of our “plan”, leaving the A2, at that point, WAS a mistake. However, in terms of life experience, it probably was not.

In pure black and white, we left the A2 motorway at junction 231 and took the road L158 towards Pack. At the first junction we took the road 70 towards Preitenegg, Köflach, Voitsberg and, ultimately, Mooskirchen where we rejoined the, errrr, A2. side The route is called the Packsettel (Saddlebag) and was about fifty kilometres long, although it seemed much further.

This detour led to us ascending and descending a mountain on a fairly well surfaced, but narrow and winding road. 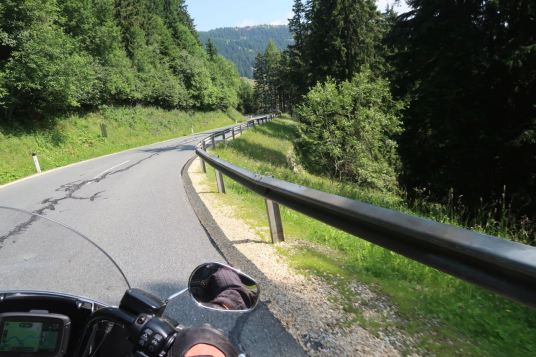 It was a Saturday morning and, as we drove on it, dozens of bikers swarmed around us. They were, by and large, mounted on ultra-modern sports bikes and were no doubt there for the adrenaline rush. As we moved (comparatively) slowly upward, the motorcycles whizzed around like bullets from a gun. It was my guess that a lot of them were going at more than double our speed and I supposed that the possible 200 kilogram differences in our respective vehicular weights might well have aided that.

To be frank, it was not really a road for a laden Harley-Davidson with two passengers to be travelling at even our speed. Almost unbelievably, most of these riders managed to raise a hand in greeting, even at those speeds and Lucie was waving back almost continuously.

In the few, rare, minutes of peace, we did have some quite incredible views of the deep valleys and the surrounding hills shimmering in a slight heat haze. 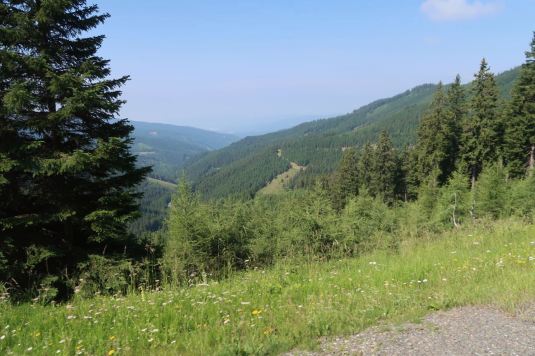 When we finally reached the top of the slope, most of the bikers were gathered there chatting and enjoying the view.

We felt we had enjoyed that view along the way so, knowing that it would probably be even worse going down, we continued on our way without stopping. Descending was, indeed, just as steep and I had to be very careful with braking. I love the Heritage but, as I have indicated, this was not really the road for it to be on when heavily laden, if at all. Some of the tight, steeply descending corners, particularly left-handers, were a bit of a trial. Lucie was also very quiet, leaving me to do the very necessary concentration. 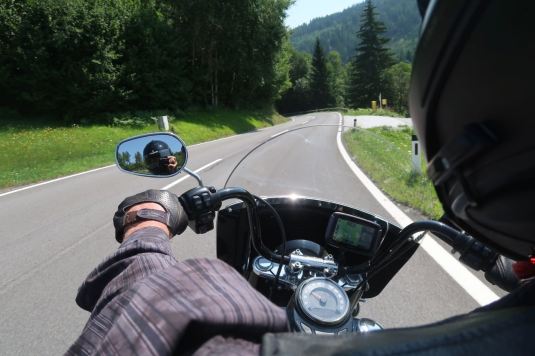 Eventually, at Mooskirchen, we came again to the A2 and rejoined it with a sigh of relief. In retrospect, I do not regret the diversion, but it did cost us quite a bit of time and that was in short supply.

For the next part of the trip, we decided to stubbornly ignore the suggestions of the SatNav and, aided by suggestions from Lucie (who had opened another map application on her iPhone), I drove along the more main roads until we finally came to our destination in the small town of Bärnbach.

As is so often the case, the Hundertwasser site we were seeking was visible from quite a distance away. 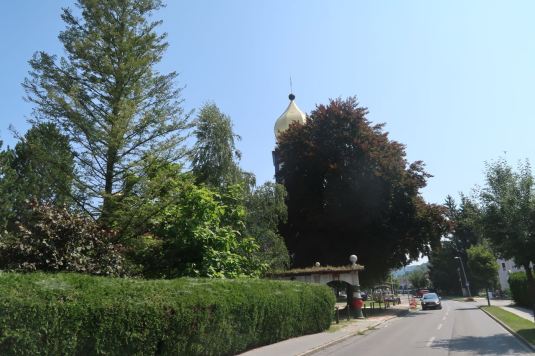 In this instance, it was a Catholic church that had received the “treatment” and it is, indeed, something to see. It had a lot of what we now consider familiar “touches” to the tower, walls and roofline. 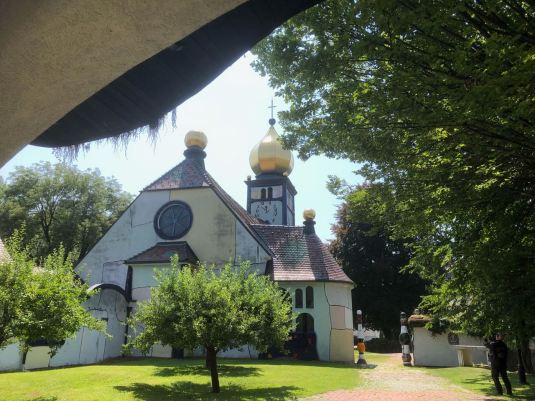 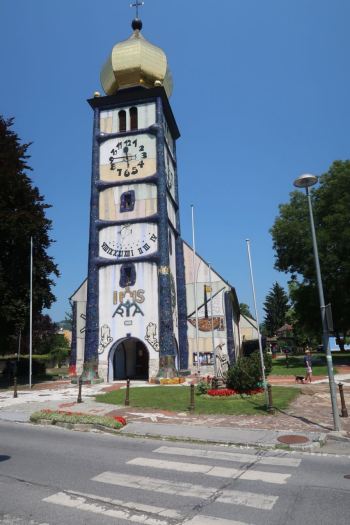 The church was also surrounded at intervals by arched gateways. Each of which was adorned by a symbol of another major religion. These included the Sauwastika (reverse Swastika) that is a symbol of peace in Buddhism, Hinduism and Jainism. That must have got them talking in rural Austria when it first appeared ! 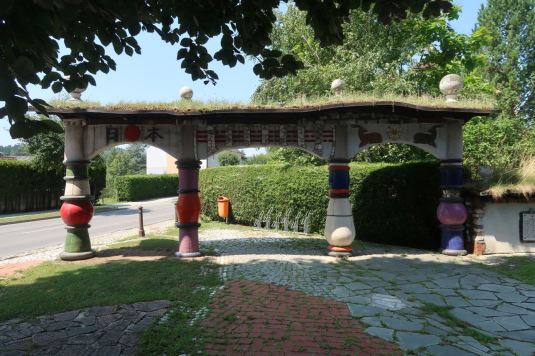 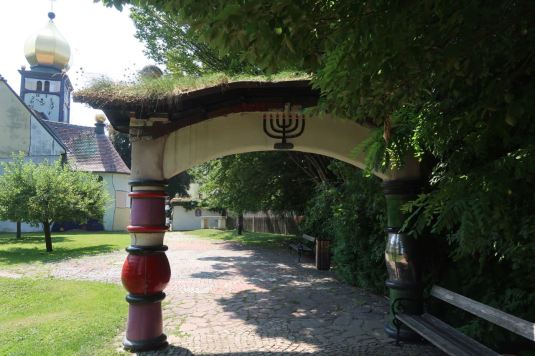 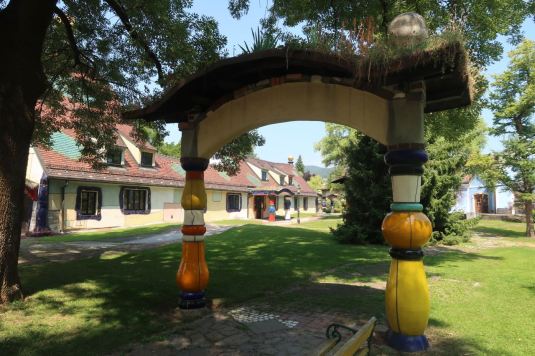 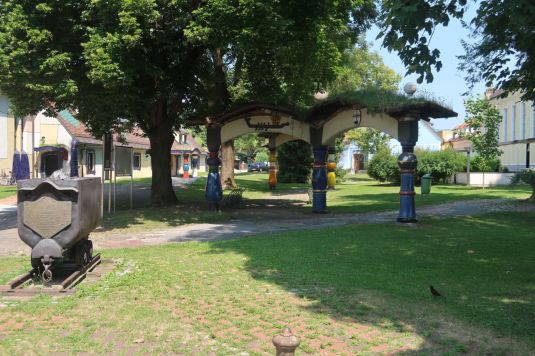 The whole thing had a great aura of harmony about it and was very peaceful. Strangely, the inside was totally conventional.

Back on the A2, we circumnavigated Graz and headed towards our second stop of the day, the Rogner hotel and spa Bad Blumau. This was helpfully signposted directly from the motorway, but once off of that thoroughfare the SatNav chipped in and, before we arrived at the hotel, we had an interesting half hour on some very rural roads indeed.

The hotel itself is gated, but these were opened by some unseen (and probably electronic) hand as we approached and we drove straight to the reception courtyard. 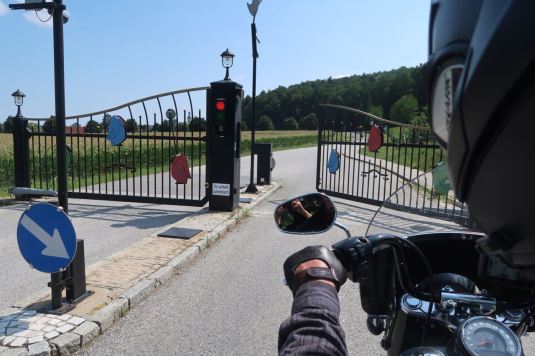 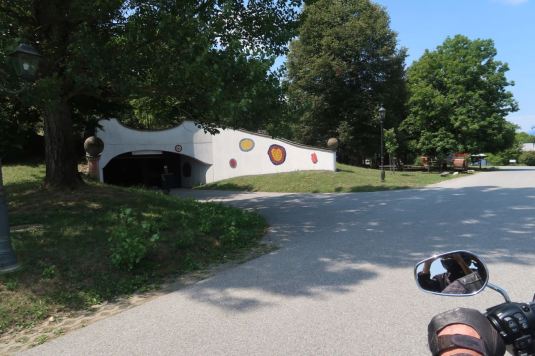 We were not sure how they would feel about non-guests just wandering around, but nobody said anything as we walked through the part of the complex that was accessible to the general public.

As seems to be a common factor with Hundertwasser designed structures, the whole complex seemed to radiate peace and tranquility.

Attention to detail abounded. Even some stones in the gravel had been “adorned“. 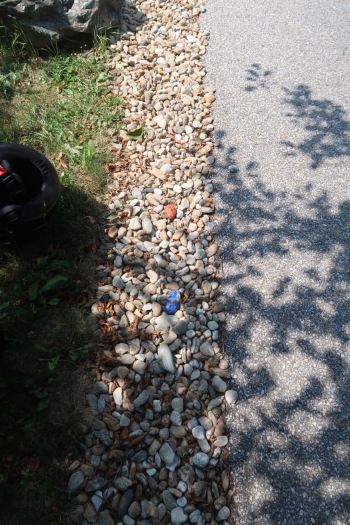 A quick glance into a corridor showed the same architectural design idiosyncrasies that we had experienced, first-hand, in the Green Citadel hotel in Magdeburg, which was also designed by Hundertwasser.

In the gift shop area, there was a model of the whole complex, which revealed that the part that we were able to see and explore was only a small fraction of the whole site. We poked around for a while and took a lot of photos. According to the model, there was supposed to be one particularly special building called “the snail” and we drove up a side road which should have led to it. Sadly, we could not see it anywhere.

We later found the aerial photograph of the site, that is shown below. We cannot see “the snail” on there either. It may never have been built.

We made our way back to the A2 by following the roadsigns, this meant we went a completely different way to that by which we had arrived. The countryside was very lovely in the extremely warm sunshine.

The motorway signs indicated that it was about two hundred kilometres to Vienna, which meant a couple of hours to the Austrian capital. The information displayed upon our eccentric SatNav however indicated it was much further away and the ride time would be much longer. Sadly, more interesting as the SatNav’s plan might have been, we could not really afford the time its, no-doubt, more convoluted suggestions would have taken up. A little sadly, perhaps, we opted for a drone up the motorway which, within a few kilometres, was wider and also designated as the E59. The Softail is very economical, particularly at the speeds we tend to ride it at in order to take in the scenery, even on the motorway, but now a little pump on the display let me know it was finally thirsty. We stopped for petrol and a coffee at a service area where they happily supplied us with petrol that was 60 Euro Cents a litre more expensive than in the countryside. Ho hum ! I took the opportunity to contact our friends and found they had been delayed in their chores and that, suddenly, we had a bit of spare time. On our list we had three Hundertwasser sites still to see and two of them were almost next door to each other in Vienna’s Landstraße district. Our intention had been to do those on the upcoming Sunday morning, but now we had an opportunity to do two of them straight away. I adjusted the SatNav and we headed for the centre of the city.

I may moan about our SatNav (which may, as I have said, be because I have never yet read the manual) but it guided us with impeccable precision straight to the front door of Hundertwasserhaus (Löwengasse 41-43, 1030 Wien). Note that the “official” address of the site is Kegelgasse 36, 1030 Wien, but that is a pedestrian road and you cannot drive there. We had actually been there before, some time ago, so we were content with a few external pictures. If you have never been there, it is well worth it to go in. 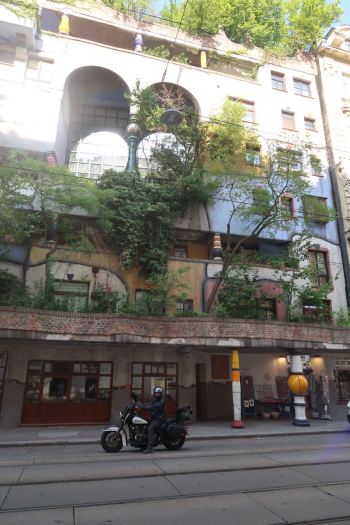 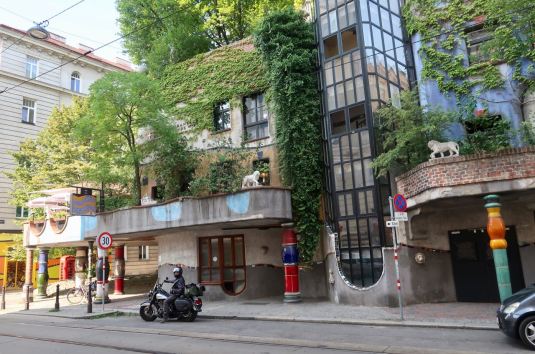 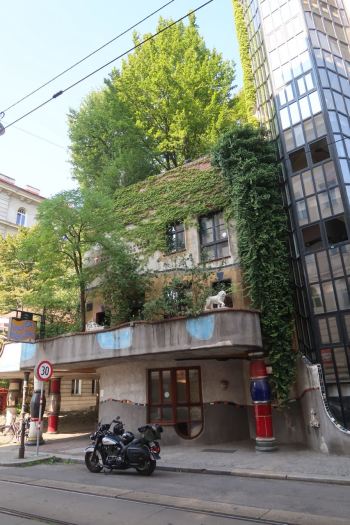 Lucie has long since had a desire to add a Hundertwasser bauble to our collection of Christmas Tree decorations and, as the gift shop was open, she went in to get one whilst I wandered around with the camera. In the gift shop she mistakenly began to speak Czech to the sales assistant, only for him to reply in Czech because he was of Czech-Austrian heritage. She was so taken by this that, in addition to the bauble, she also purchased a distinctive, Hundertwasser cup for her morning expresso.

Just around the corner is yet another Hundertwasser site, the “Hundertwasser Village” (Kegelgasse 37-39, 1030 Wien) (there is a “road” entrance at Blütengasse 14). This was formerly an old tyre factory and was transformed by the architect into a collection of shops and cafés and has a mini forest on the roof which is another one of Friedensreich’s little trademarks. Sadly, this appeared to be shut due to the pandemic. 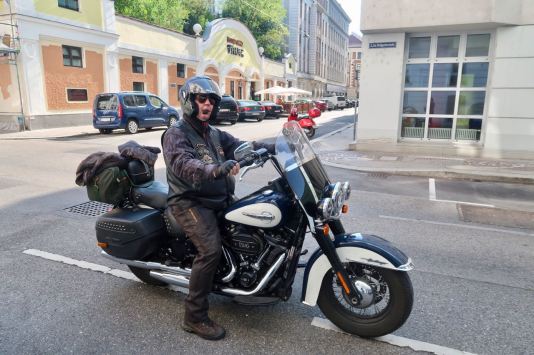 Then we made our final ride of the day to the Penzing district, in the west of the city, where our friends have their apartment. They live in an extremely pleasant complex of four apartment blocks, constructed in the 1970s in a quiet road. The style is quite reminiscent to that of cooperative construction from that time in Prague, but to a far higher standard. The four houses are each of four-storeys and have their own forest park, which is beautifully maintained, on the hillside above. Up on the hill is a 50m swimming pool and tennis court. From the pool, there is a view over the city, but the terrace of each flat faces the park and it totally tranquil and quiet. It was hard to believe we were in a city at all.

We enjoyed a barbecue and some drinks on the terrace as evening fell and did a lot of catching up with which I will not trouble you.