It is my usual practice to rise early and go for a morning walk before breakfast, but I slept until almost seven, which is unusual. This meant my first job was to run to the restaurant for Lucie’s early morning coffee before I was, at least, able to cross the road and take a few snaps of the peaceful lake.

We had been told that the Vogel cablecar began operations at 09:00 so we had to get moving. Well, at least Lucie did, I already was. We went for a quick breakfast at eight which, like the meal of the previous evening, had a the air of a school cafeteria offering to it but, nonetheless, contained everything you needed. I was able to make a couple of mugs of nice tea from my own bag, so that pleased me. After repeating our walk of the previous evening, we bought our cable-car tickets at exactly 08.56. 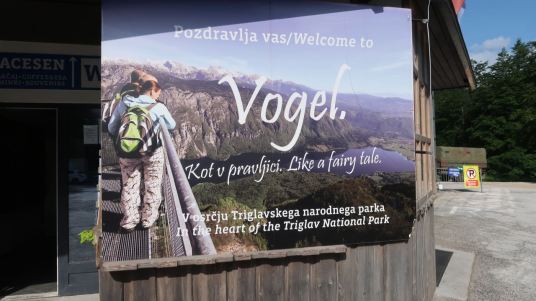 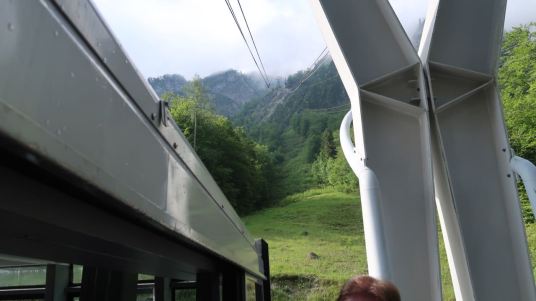 We packed ourselves into the cabin with fellow travellers of many nationalities and were smoothly whisked to the top which I believe was about 1500 metres above sea level. Certainly, the summit was above the clouds, so we could not see the lake far below us. We could see, however, the massifs of other mountains all around us in every direction. The splendour of some, which still had traces of snow, was breathtaking. 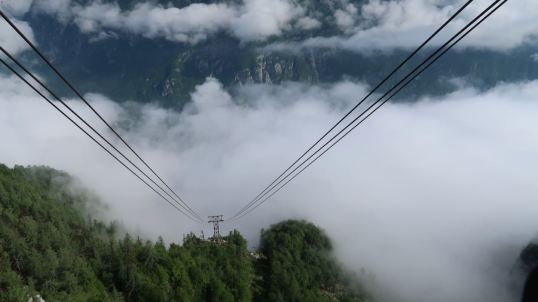 The plan was to make a relaxing walk from the top station of the cable car along the path around the hill and down to the lake. There was a pleasant restaurant, so we enjoyed the views and some hot drinks and then set off past some carved animals on our comfortable journey down the hill. 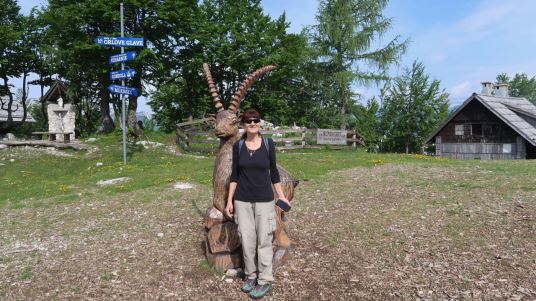 This idyll lasted about ten minutes. Vogel is a ski resort and we are now certain that the downhill “path”, as marked on the map, is in fact a principal ski run when it snows. It was not long before what was virtually a precipice appeared in front of us as the already rocky path appeared to head, almost vertically, downwards. If it was a skiing piste, it would certainly be a “Black Run”. There was the option to change to a slightly less intimidating descent, so we took it, but Lucie (who skis well) said that even that was probably a red slope. After a further ten minutes, the tracks apparently merged again and we began an unpleasant traverse of a rocky slope topped with loose shale. The idea of a relaxing walk was long gone. Lucie reached the conclusion that, unlike in the Czech Republic, the fact that something was marked as a “tourist” route, did not mean that it actually was one. It was only a marked route. Even then, unlike at home, it was not way-marked although, in truth, any signage would have been superfluous. Basically, the only route down was via the vegetation-free slopes cleared for skiers. There was nowhere to get lost, unless one wanted to jump straight down from the edge of the precipice and end their suffering. By that, I mean the loose stones under our feet, which caused continuous slips and slides and which, miraculously, we managed to negotiate without taking a tumble.

We did meet a few enthusiasts going up in the opposite direction and we assured them all that going up was probably better than going down. Although I am probably describing it quite dramatically, the spectacular views along the way were worth the perilous descent. The sun was shining down on us and, apart from the few people we met, there was peace everywhere and we will definitely never forget that. 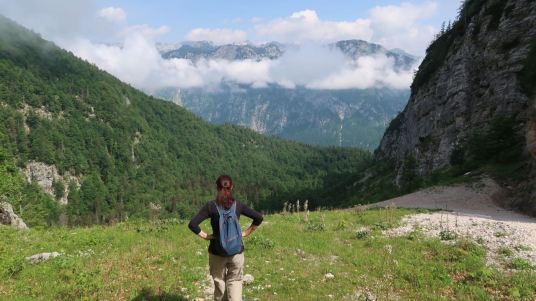 We finally emerged into the car park of the cable-car station and I was quite surprised, in such a comparatively remote location, to note vehicles from eleven different countries were now parked there.

Just below the cable-car was a campsite, Camp Bohinj (Ukanc 5, 4265 Bohinjsko jezero, Slovenia) where we stopped to replenish our fluids and eat a plate of fries. Surprisingly, the only beer on offer there was a Czech one, Kozel, which is brewed about thirty kilometres from where we live. It was certainly refreshing and had travelled well. Lucie had a non-alcoholic offer from the Union brewery which she pronounced to be excellent.

We rather trudged home. Although we consider ourselves experienced hikers, the tricky descent from the top had been more than a little bit taxing. We decided to have a little siesta but, as rain was forecast, we knew we needed to ride into the town for something to eat before it arrived. So we set our alarms.

At around four in the afternoon, we rode along the picturesque lake shore to Ribčev Laz, which sits at its head. It is a small place but Trip Advisor did have two recommendations. The first one Restaurant Triglav Bohinj (Stara Fužina 23, 4265 Bohinjsko jezero, Slovenia) had a nice terrace and did look pleasant, but it was closed for a wedding …. The second, a nearby pizzeria (whose name I failed to record) did not open until six. We headed back into town and, on the way, were passed by the hooting cars of the wedding party guests heading towards, what had been, our first choice !

We ended up in the Foksner Restaurant which was part of the Gostilna Rožič guest house (Ribčev Laz 42, 4265 Bohinjsko jezero, Slovenia). This turned out to be a good choice. 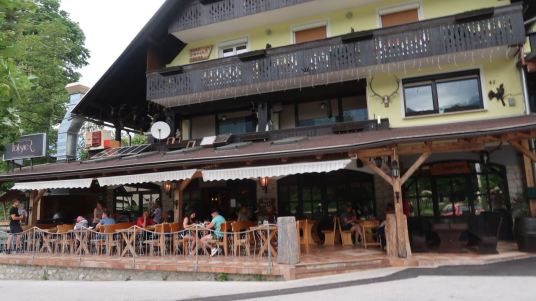 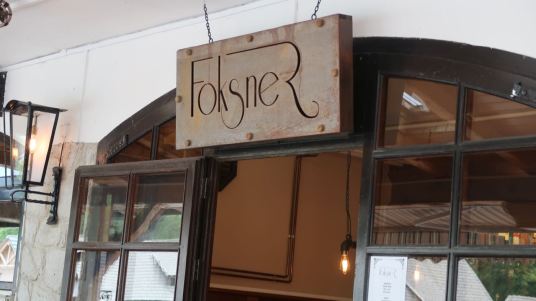 We both had the excellent shredded pork sandwich.

This was followed by a pannacotta, which was cleverly decorated to resemble a little flower in a pot.

We got back to our room just as the heavens opened, but the rain quickly subsided and, in the end it was really more of a shower.

By the evening, it was almost dry so, around eight o’clock, we walked along the lake shore to the village again. It was so incredibly quiet and peaceful. The waters of the lake made an exit, in the direction of Lake Bled, under a small bridge.

Thousands of little fish waited there, in the shallows, for people to drop them some bread. 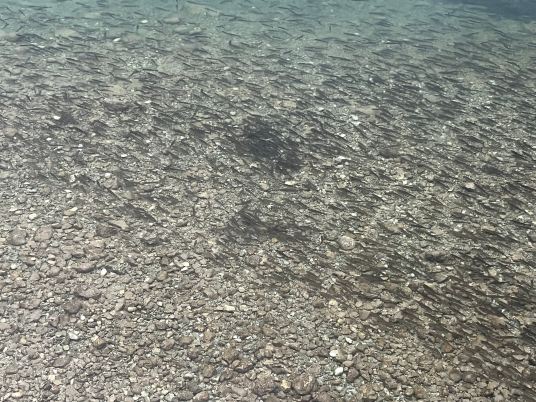 We had pancakes in the restaurant of the rather swanky Hotel Jezero (Ribčev Laz 51, 4265 Bohinjsko jezero, Slovenia). I had a variant with Nutella and Lucie decided to try the one with walnuts, thinking it would be with walnuts and something else. It was something of a let down, being just a dry pancake with nuts and neither sweet nor otherwise. We could not even be bothered to record it. The service was also quite dreadful, almost as if the staff had been imported directly from Prague. There is an old Czech movie, “Vrchní prchni” by the Director Zdeněk Svěrák (of “Kolya” fame), where such poor service is parodied. Lucie said it was just as if we had wandered into the film. The Hotel Jezero had been Lucie’s original choice of accommodation, but our cheap little place had a far better atmosphere. We had dodged a bullet !

Naturally, as soon as we set out to walk home, it began to rain again. Luckily, it was not a deluge and we were only slightly damp by the time we got there.

One thought on “Around Lake Bohinj and the Triglav National Park”