In the morning, it was still overcast, grey and blustery. The sea below the hotel was a dark steely blue, with creamy tops to its rolling waves. Aided by the strong wind from the east, it was crashing into the cliffs below the hotel with great gusto. It was more the kind of weather we expect in Prague in October.

The same smiling receptionist was on duty but she did not ask us if we wanted to try the pool before we left !

The Ultra was quite a handful in the squalling winds, particularly as we navigated the twisting little roads of south Alicante. Luckily, it was, by design, quite a short ride and, in about 45 minutes we arrived at the the return point. This was easy to find, but quite hard to get to and we had to go into the airport and come out again in order to get to the gate.

We said goodbye to Juan (as Lucie still insisted on calling our Harley) and caught a bus from outside the drop off point to the terminal. 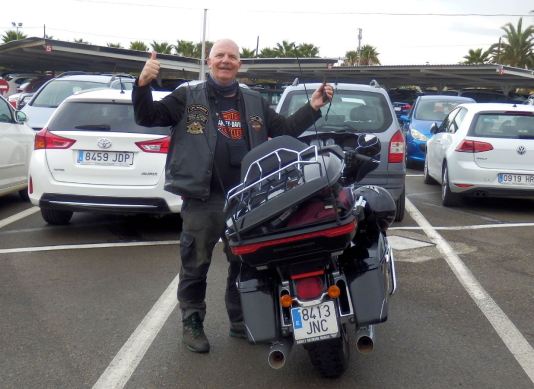 I was not that sad to say goodbye to the Harley myself. There was no doubting the machine’s underlying qualities, that is true. It had carried us a long way easily, smoothly and with absolutely no fuss whatsoever. Sadly, it was simply too big and heavy for me ever to fall in love with it. Lucie loved its comfort – I hated its weight.

I patted it (him) on his capacious top box and walked to the shuttle with Lucie.

We were already checked in and we were soon airborne in the direction of home.

Our own reality, alternative as it may be in every way, was calling and, anyway, now we could begin planning our next adventure !