So the last full day of our vacation dawned.

We had no specific plan, just a hopefully leisurely journey more or less north. The weather forecast was not so good. The last summer day began with the departure from our hotel in La Rábita and the steep climb up to the highway where more grey clouds were very much in evidence.

The entire region that we were then riding through was devoted to horticulture. This was primarily the production of tomatoes on a vast scale. These are predominantly grown in ugly, tatty “greenhouses“. there is no glass, they comprise flimsy steel frames supporting acres of plastic sheeting. A large proportion of this plastic has been torn by the seemingly incessant winds and flaps loudly enough to be heard even on a passing motorcycle. South of Almería, this unsightly mess stretches all the way along the costal plain as far as the eye can see. 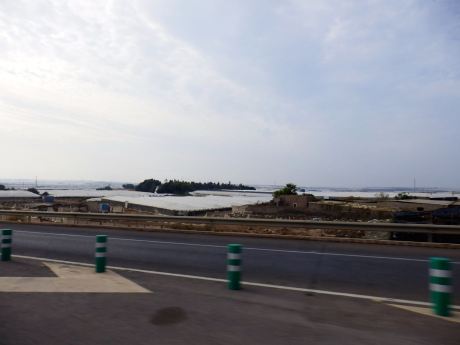 Further towards the north, the “greenhouses“ cease, but there is a very strong smell everywhere. The landscape is divided into vast valleys by the rocky outcrops of the mountains and each valley has its own distinctive and not very pleasant smell. Whether this is due to the production of fertilizers for all those plantations or to something else, it is hard to say. Even if it did not smell so bad, most of the landscape would still be unattractive to the eye. Except for small areas, far from the highway, were more original buildings can be seen between volcanic rocks, it has nothing to recommend it whatsoever.

It is clear that all of the original development in the area is slowly retreating in the face of the large-scale tomato production. Around the highway are half-demolished old huts crumbling among the neglected foliage of earlier types of crop. Occasionally, there would be some new development visible, but most often only an abandoned skeleton of a building bearing a “For Sale” notice.

It was a great and quite sad contrast to the picturesque Andalusia that we had left somewhere near Almería.

Our final hotel was a somewhat luxurious establishment on the outskirts of Guardamar del Segura. It was primarily chosen for its easy proximity to Alicante airport, a mere 45 kilometres away – but it was also highly (and it transpired, accurately) recommended for the standard of its restaurant.

It was ideally situated just above a beach, with foamy breakers racing in on the wind, but it was not at all warm and so we could only laugh when the receptionist asked if we would be interested in going to the (outdoor) pool. Despite the slightly grim weather forecast we had only seen a few drops of rain all day – and these were easily deflected by the Harley’s fairing – so we had no wish, having remained warm and dry, to get wet and cold of our own volition.

The hotel restaurant WAS good – as was evidenced by quite a crowd of non-guests in the dining room. We sent a greeting to our friends in Prague that we usually meet on a Tuesday night. Then we had our final lovely meal looking out over the windy beauty of the darkening bay and agreed we had, after all, had a great time.