Although I did not hear it myself, I was reliably informed that it had rained hard all night. Lucie claimed the downpour was such that, even when she finally did go to sleep, she dreamed of floods ! It was not raining in the morning, when I did wake ip, but it started again while we were having breakfast. Not only that but the downpour was of sufficient intensity to drive us back into our room to wait it out, as opposed to hitting the road. I really fancied doing a bit of riding WITHOUT waterproof clothing on !

We watched it disconsolately out of the window for a couple of hours until finally, around half past eleven, a streak of blue sky appeared outside the window and out came a bright sun. Before we could even get our jackets on, the sky was totally blue and it was already warm. Luckily, this was to last all day.

Our first stop of the day was at the Roman monuments in Bolonia, which was quite close by and where there is the excavated city of Baelo Claudia. In a fairly small area there are all the city facilities including a theatre, the temple of Isis and a fish factory. It was very nicely described and documented and moreover, as EU citizens, we had free admission.

From Bolonia, we drove to Cadiz, which was the main point of the day’s program.

The journey took about an hour, past the fields of wind farms, cows and cowsheds, pines and large groves of olive trees. At first, the road was flanked by mountains, which softened slowly into rolling hills, before becoming a wide plain leading to the sea. The city itself is surrounded by the sea from all sides and access from the mainland is via a narrow neck of land with the highway and railway lines. It was a tiny bit reminiscent of Florida.

The ancient city of Cadiz has three fortresses. Two are on the land and one is stuck out into the sea to guard the port. The one guarding the port proved ineffective when, in 1587, the British Admiral, Sir Francis Drake sailed into Cadiz with a fleet of “Fire Ships” and almost totally destroyed the nascent Spanish Armada. Even today, it looked just like it did in paintings of that event.

Cadiz is considered to be one of the oldest cities in Europe. There are some excavations, but we missed seeing them because we were very behind schedule. The old centre has a well kept promenade that fringes the sea and is so compact that almost every side street has a view of the ocean. We walked around the promenade, had a drink in the sun, then walked a bit more before having a delicious lunch. Old Cádiz impressed us immensely. It is beautiful and people actually live there. There are no hotels on the beach or waterfront, just normal apartment buildings. It has a very nice feel about it. 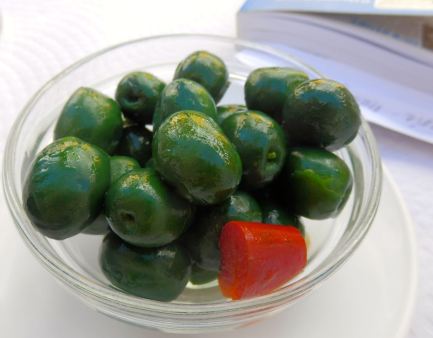 We left Cadiz along the narrow neck of land, passing large piles of salt drying in the sun.

Then we drove inland to Jerez de la Frontera, which is, quite literally, the “cradle“ of sherry making. “Jerez” is the Spanish word for sherry and there are also several types of sherry produced there or at least have their manufacturer’s headquarters there. It is a very picturesque town, with, in addition to the sherry factories (which give the town’s air quite a fruity quality), a well preserved castle and a lovely cathedral.

We sat in a beautiful square where flamenco dancers were performing and, although I seldom drink when I drive, I did feel compelled to sample a glass (or two) of the excellent sherry. Lucie, who does not drink alcohol, contented her self with an alcohol free beer.

We drove home with a glorious sunset in the rear view mirrors and got back to our hotel just before dark. We took a different road for much of the way and our route took us through the ancient town of Medina Sidonia. It was the Duke of Medina Sidonia who commanded the reconstructed Spanish Armada to humiliating defeat and destruction in 1588, a year after Drake’s exploits in Cadiz.

There was a Trip Advisor recommended restaurant only three kilometres down the road which we were able to locate easily despite the Harley’s weird navigation. Of course a large sign beside the road helped as well ! It almost goes without saying now that our seafood dinner was inventive and superbly cooked.

We went to bed full and happy.