The hotel had a street lamp shining under the window which glowed unremittingly almost all night. This created a false impression that it was dawn, when it was not

Because of this, we were trying to pack at seven o’clock, before breakfast, when it was still as dark outside as being inside a sack. Of course, it was raining steadily.

We had to force ourselves to smile as we ate our breakfast – a thoroughly depressing forecast was running on the screen. The tanned, smiling, weather girl at odds with the blue temperatures, the black clouds and the water droplets that filled the screen. Clouds and water everywhere.

We left. before eight, while it was still only dawn (the sun was supposed to rise at 8.21 – that far west, it was more “English“ time than European). 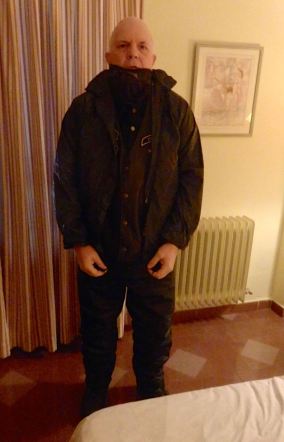 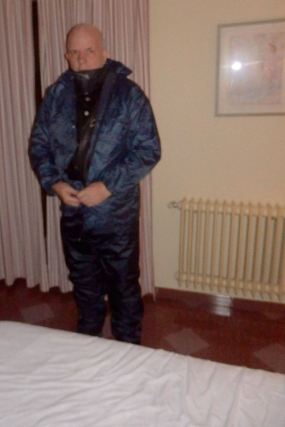 It did, in all honesty, get light quite quickly. The snow-covered peaks of the Sierra Nevada appeared among the remaining shreds of clouds and we realised we must have unknowingly achieved quite an altitude and had slept just below the snow line. No wonder that, even in our rubber suits and most of our clothes, it was not very warm !

It did get warmer, but not significantly, as we drove down towards Granada.

We found the Alhambra (the Moors’ residence before the Spaniards defeated them) without any real problems despite the fact that navigation on the Harley was not very helpful. I think that the Spanish way of writing addresses may have confused it more than a little bit ….

Entry to the Alhambra was quite complicated. We had already bought our tickets over the internet – and these (it appeared) had then to be printed at a ticket vending machine. On the face of it, a very simple process, but not in reality. In the absence of any instructions in English, we printed everything (four pages) only to discover, at the cash desk, that all we actually needed was our reservation number ! But there was no way of knowing that ! Ah well !

You can get inside the Alhambra complex at any time with a ticket for the morning or afternoon. That said, entrance to the Palazios Nazaries is dictated by a time you state when you purchase your ticket and it is important to arrive in good time as they are quite strict. The Palazios was a good 15 minutes’ walk from the entrance and we only just made it. The whole Alhambra complex is quite large and all of the palazios are really beautifully decorated in ornate, yet simple, Islamic style. The Temple of Columns, which is like being in a forest, is particularly striking. 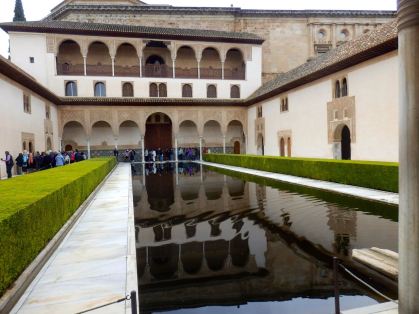 Overall though, at the risk of sounding like poseurs, we both agreed that when you have seen, as we have, some of the other things around the world, it is not quite so breathtaking. It might sound blasé, but we have been there, we have seen it and we have the tee shirt. It is impressive, but it does not come close to somewhere like Angkor Wat.

The sun was shining a little in Granada, but we still put our rubber clothing on as we headed for Málaga and Tarifa. It was overcast, but as we drove down from the mountains, visibility did improve enough for Lucie to take a few pictures.

The sight of a nice restaurant reminded us we were getting hungry, but, as so often happens, that was probably the only decent restaurant between Granada and Málaga. We saw nothing else enticing and got all the way to Torremolinos without seeing anywhere we liked.

At that point our Harley (Lucie had taken to calling it Juan), began flashing a petrol warning light. This meant, as we found out when we filled up, that we were running on fumes. While I filled the tank, Lucie consulted the Looney and found a good place to eat. But sure enough, the Harley’s navigation COULD NOT find it. Serenity now !

In the end, we just gave up and left the motorway at the nearest resort, Fuengirola and drove down to the sea. There were restaurants everywhere and it was really quite warm. We abandoned our jackets and ate a nice lunch of mussels and scallops whilst surrounded by crowds of half-naked, scorched Englishmen. 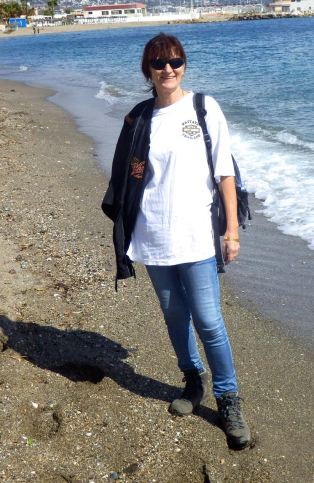 Thanks to the internet, we were able to book our evening accommodation while we waited for our lunch to arrive. Lucie deliberately chose a place with a good restaurant, she is as hungry as a heron when it comes to fish !

Then it was onward, ever westward, once again.

Almost as soon as we left town, without our oversuits, it began to rain again. We took refuge in a petrol station and drank a coffee and it passed over. But, less than ten minutes after we once again resumed our journey, the downpour became so intense we simply had to stop again. We needed a roof or some shelter and, weirdly, we survived it all in a car wash booth ! A little water still dripped into it, but compared with the almost biblical deluge outside, it was inconsequential.

This time though, when it stopped, it did stop for good.

The sun came out, the sky went blue and, finally, we could see the imposing and distinctive shape of Gibraltar in the far distance. It really is a big rock.

We drove around it, getting a view from all sides and arrived at our destination, the Hotel La Torre, which is on its western side.

Originally we had a very romantic room with a huge bathroom and a sea view, but when, after a bit of replanning, we decided to stay here for two nights, we had to move to a newer part of the house that was not so romantic and had no sea view.

There was, however, an adjacent wooden terrace, surrounded by beautiful flowers with a beautiful view of Morocco across the narrow strait. We had a restful drink in the sunshine. That is why we travel !

The restaurant also lived up to its billing ! We had sheep cheese, two kinds of local ham, sea bass and tuna. It was all quite superb.