We woke early in the morning, it was still lighter, earlier, that far south. As I have said before, we are, by habit, “early birds“ but sadly, the Italians are not. Even though we were waiting when the nearest cafe finally opened its doors, we only just had time to bolt down some sticky pastries before we were alerted, by Livio’s merry tooting, to the fact our lift to the dealership had arrived.

Italian coffee, particularly the Espressos and Ristrettos favoured by Lucie is murderously strong. The liquid content is so minimal, I always think that just chewing and swallowing a few beans would do just as well. So quite how Lucie’s, no-doubt, heightened senses coped with Livio’s rush-hour driving, I cannot imagine ! I contented myself with the fact that, for all the macho posturing and gesticulation that accompanied even a parking manoeuvre, there did not seem to be many accidents in Italy. Anyway, we arrived unscathed.

Even if “driving“ analogies about your life are left aside, it is sometimes all of your plans that can hang by a proverbial thread.

We had reserved our bike and paid the security deposit with my Barclays’ Charge Card. I am no great fan of plastic money, but such a card, with its substantial limit, is a boon when travelling. In addition to guaranteeing things, like rentals. It is always good to know that you can do absolutely anything decreed by unexpectedly changed circumstances – emergency flights, for example, or even buying a small car – and you can worry about it later.

Anyway, as we were completing our formalities, the rental guy, Ivan (see below) told me my card had been rejected.

Repeated attempts to gain authorisation having failed somewhat embarrassingly, I had no choice but to telephone BarclayCard.

For information, I had, at that moment, been using the same card for over 30 years. It had, as I said earlier, a fairly substantial limit, but it was a Charge Card, as opposed to a Credit card and the entire balance had been debited straight from my account over 350 times without a tiny hitch. With all the flight costs and hotel bookings in my former career as an IT Consultant aggregated, I am sure the total turnover would have exceeded the GDP of a third world country.

So imagine my astonishment, surprise would not cut it here, to discover that, because of some EU regulation about which I had neither heard nor been informed of, the card had been summarily cancelled !

The main problem was that, if you have a card like that, you get a bit complacent. I would argue about it later, with both BarclayCard and Lucie – but at that moment our plans were, very much, in the balance.

Luckily. Lucie had brought her own Bank cards and Ivan exhibited the typically “laid back“ Italian attitude and just changed all the forms …….

Having a wife with a bit of cash in the bank is a very useful thing.

So, problems sorted, we were finally introduced to our machine !

It was a new model, a SportGlide and the first one I had seen in “life“ as opposed to parked beside a demo truck.

It was a handsome beast, all maroon bodywork, black engine and shiny chrome. It had two capacious panniers (our little bags more or less dropped straight in) and a small backrest – which is a must to us !

The engine was the then new Milwaukee 8 and I looked forward to trying the “new“ technology !

A real biker himself and a cool, laid back guy !

It is a big dealership, with anything and everything you could ever want or need.

Coffee is free (Lucie liked that) and the tee shirts and other clothing has that stylish, Italian feel.

The difference between the SportGlide and our own machine (a 2004 FatBoy) was fairly dramatic. We love our own bike, but the contrast was enormous and, at first, almost a little scary. I firmly believe that, if you can ride A motorcycle, you can ride ANY motorcycle – but the “extra“ 17 cubic inches, the lighter kerb weight and 12 years of development almost caught me out several times at first. It just felt so “quick“ and I suppose, in truth, by straight comparison, it was.

Our projected route was to cross the whole of Italy, via the mountains, before running down the west coast. Eventually we planned to cross back via the “sole“ of the boot to the tip of the “heel“ (that is one of our “foibles“, the “tips“ of places !) and then back to Bari.

We would, as ever, rely on good old Booking.com to find us places to stay.

I won’t go so far as to say we hurtled off in the direction of Potenza, but it was not far removed from that. In addition to all its other undoubted qualities, the SportGlide was almost deathly quiet (our FatBoy definitely is not quiet !) and many times I looked down to find I was going at least 20 to 30 kph faster than I thought – which often translated to 120 kph + We normally cruise at about 80-90 kph …….

Away from the coast, the scenery was altogether more lush and so we literally flew through the greenery and up the well surfaced road into the mountains. Overtaking, when needed, required less careful forethought, the motor was very responsive – the suspension seemed superior too and, where there were corners, it just ironed them out !

It did get noticeably cooler as we climbed, not to the point of being unpleasant, but we were glad to stop for yet more coffee and a brief lunch of sticky things just before we started to descend again. The trip downwards was even more exhilarating and I think it is fair to say that on a couple of occasions I became aware of, if not to say, grateful for, the improved braking technology that a dozen years had brought.

The road down from Sala Consilina in the mountains, to Scalea, which is on the Tyrhennian coast, wound through two National Parks and was beautiful indeed.

It is a sad fact that many things in southern Italy are tatty and neglected – but this does not apply to most of their roads. Nobody, I think personally, builds a road like an Italian – they want to enjoy the driving experience and it shows. The surface was good, the view forwards was good (which also meant that rear vision in the big mirrors was good too) the curves were just challenging enough to be exciting and, to be frank, I was actively enjoying myself. It was a truly lovely ride.

It was not quite as thrilling after we came to the coast and turned south, but it was truly beautiful and the views out across the sea were often breathtaking. I stress the “out across the sea“ part of that sentence because, as soon as we came to a more populated area, there were innumerable bags of rubbish casually dumped on every remotely flat surface beside the road. Very sad. 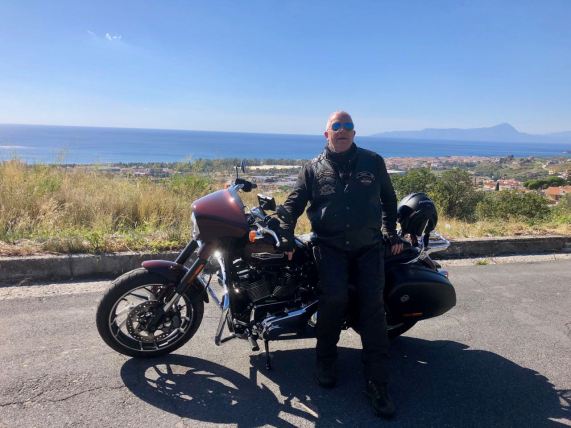 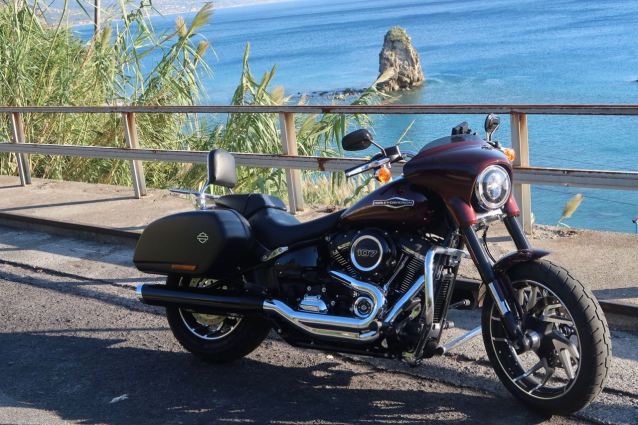 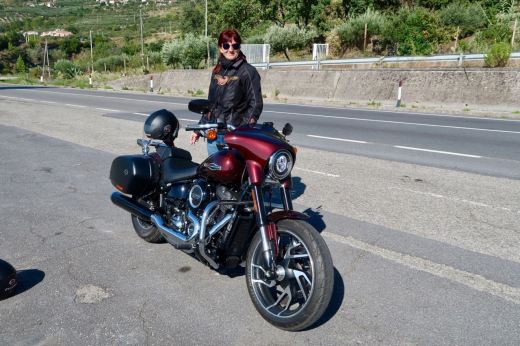 Guided by the navigation on Lucie’s iPhone we came eventually to Paola where we were to spend the night (B&B Adele, Via Fiume Neto 3, Paola).

Paola was one of those little towns with a pair of roads running parallel snd not far apart and finding our accommodation was just a tiny bit tricky. It was set way back from the road and was well worth the search. Booking.com certainly came up trumps ! We had a lovely bright, airy room in an old farmhouse that was watched over by a pair of sisters, Chiara and Maria, that were as lovely as any pair of Italian sisters your imagination could conjure up. Obviously they were both raven-haired and cute, but they were also very welcoming, obliging and funny with it. I felt they were quite new to the renting business and were thrilled that WE were from somewhere THEY considered distant, mysterious and exotic ! 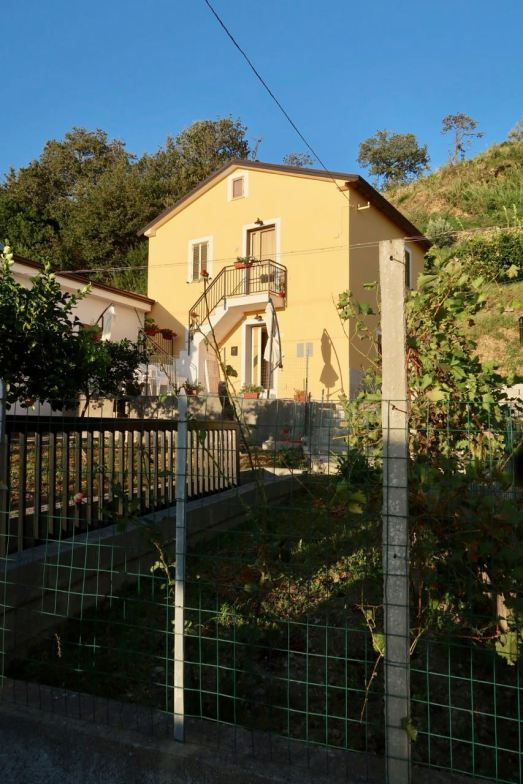 The girls also pointed us at a great restaurant (Le Mimose, Via Gaudimare 12, Paola), only a kilometre or two away, where, with minimal linguistic difficulties, we had the kind of seafood meal we dream about – and travel to get. 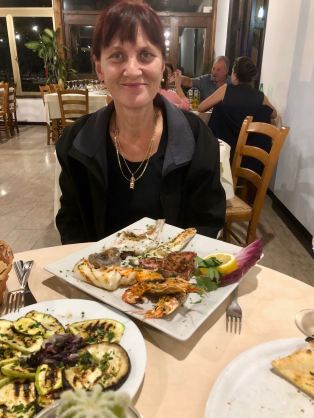