As so often seems to be the case, we were rapidly approaching the end of another year – and we hadn’t done anything significant on two wheels.

We had, of course, done a few things with our HOG buddies.

There had been the annual Spring ride to the town of Podebrady, which is our club’s “season opener“ and attracts many hundreds of Harleys. It is HOG Prague that “leads“ a huge parade and all the other major Czech HOG groups and Harley clubs are also represented – as are, more recently, clubs attached to all the major and indeed, many minor marques (there is even a detachment of “Simpson“ mopeds) – in a column that can stretch for many kilometres behind our Director.

HOG Prague also staged a special rideout on May 8th to celebrate the 100th Anniversary of the Czech State. A large number of our members, suitably wearing a lot of Red, White and Blue, visited sites all around the State that had been significant in the first century of its existence. We culminated in the grounds of Prague Castle where the hordes of tourists watched open-mouthed as a large (and no doubt scary) group of bikers laid a wreath at the statue of the State’s first president, Tomáš G. Masaryk.

In July, Prague had also hosted the 115th Birthday Party for Harley-Davidson in Europe. It was estimated that there were between 25 and 30,000 Harleys in town and the Saturday parade was forced to move off in several groups, widely spaced.

HOG Prague was heavily involved in all aspects and I was privileged to meet, for the second time, William A. Davidson’s great-grandaughter, Karen.

But ……… Lucie and I hadn’t really done anything of note on our own.

A few years ago, we took a short holiday in Bari, which lies in the very south of Italy. The budget airline, WiZZ, operates a direct flight at a very favourable fare. On that first occasion, we had hired a car (sorry, but it happens) and although our time there was short, we had both been enchanted by delights of the regions of Apullia and Puglia which are near the town.

I remembered spotting a sign for a Harley-Davidson dealership as we were heading back to the airport on that visit and I had stored it in my memory banks.

We finally worked out that, at the end of September, we would have a few free days coming up. With time to plan, I contacted the dealer, in Bari and was pleased to discover they did operate a rental scheme.

The day came and we were off and running !

With only small hand bags (which WiZZ ruthlessly enforces anyway) and our helmets (to which the flight attendants DID look askance, but did not say anything ….) it was and easy transition from cloudy Prague to the sunshine of southern Italy.

Our driver, Livio, who had been sent by our lodging, was waiting for us with his immaculately kept, Dodge PT Cruiser (of which he is immensely proud). He greeted us warmly and we were whisked, with typical Italian “brio“ (code for homicidal driving), to our Air B’n B (La Corte Del Borgo Antico, Strada Atollini 4, Bari) for the night. 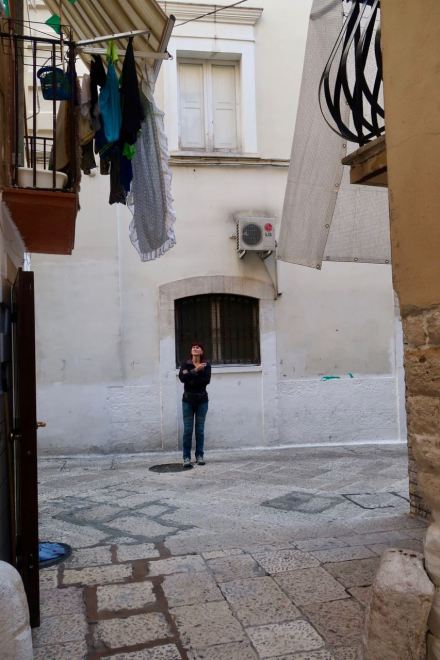 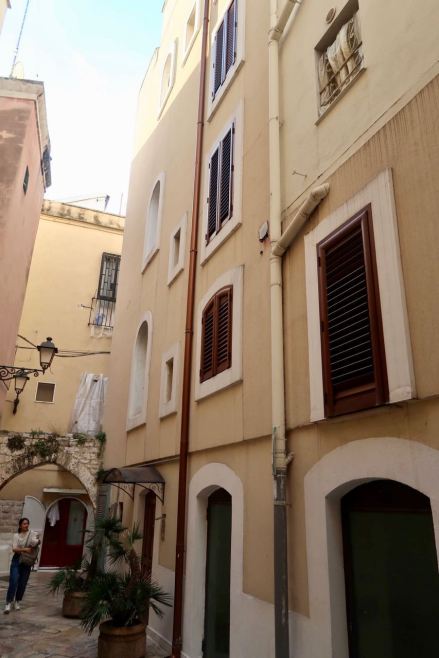 Excited by the prospects for the following day, we wandered around Bari’s quaint historic streets in the twilight. It has a huge castle, but it was closed. Finding a restaurant was harder than we remembered, but it was after the “season“ in all fairness. We did eventually find a nice, but simple, little cafe in the shadows of a massive church.

Then, it was off to bed in our somewhat eccentrically laid out lodging, so as to be ready in the morning.