All good things come to an end and our great Australian holiday was no different.

We did not hurry much in the morning. Our flight would not be until after 10 in the evening, so we had the whole day to explore the city. It was quickly clear that it would probably be far too many hours. After breakfast, we left the Glenferrie Hotel for the last time. I confess I had grown rather fond of it.

First, we headed to the Southern Cross station. We had noticed there were lockers there and our great plan was to put our luggage in one of them for the day. The trouble with great plans is that everyone has the same one and there was not a single locker to be had. Not good. There was a left luggage office but the confusing written instructions initially discouraged me. Luckily, Lucie refused to countenance hauling our gear around all day and her dogged persistence eventually paid off. Our luggage was safely deposited and we were free to go exploring unencumbered. Even though all that took longer than we expected, we still had a lot of time. But there were things to see.

First, we went to Federation Square, which was quite nearby. Strangely, it is not a square, it is not even a park, it is just a place where people can gather close to the Yarra river. Activist groups seem to use it as a place to demonstrate, but most of the people of Melbourne dismiss both the square and the demonstrations with a sardonic shrug. We walked around for a while, it was stickily hot and, although there were things to see, there was nothing really thrilling or unique.

We love trams and seized the opportunity to ride on one !

There was one bridge/walkway over the Yarra river which had a perspex panel for every single country in the world giving a few key facts about it. Well, not every country. The split of Sudan into Sudan and South Sudan had obviously caught out the city fathers just as it had caught out everyone else. I love to be nit-picking. What it said about the Czech Republic and England was accurate at least.

The Yarra looked a bit dirty, but it is actually, at that point, near enough to the sea to be quite saline and therefore a bit brackish.

We went to a pleasant brunch, which took a while, but the hours still stretched ahead. Final days always do drag.

Like Sydney, Melbourne has a viewing platform, the Eureka Tower which we found easily enough. 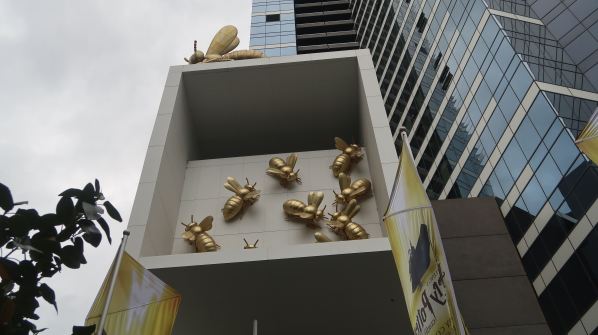 I am one of those people who always knows, in my head, what I need to pay, so I queried the amount for admission as it was way too low. For an incomprehensible reason, as I certainly had not asked, I had been given a discount as an Australian senior. In fact, after I queried it, the cashier then gave the same discount to Lucie who is a mere slip of a girl. The difference was not inconsequential but did nothing to ameliorate her distress at being considered a pensioner.

After the usual tedious security rigmarole, we were literally catapulted by express lift to the SkyDeck viewing platform 285 metres above our heads. My stomach dropped so fast that the 1642 steps seemed, momentarily, to be a better option- but then we were there. It really is that fast. The SkyDeck is the highest public viewing platform in the entire southern hemisphere. The panorama over the city actually seemed to us to be even better than in Sydney. The sea was plainly discernible in the distance, probably to the place where we had been with Rick and Gőknur a week, but which already seemed like a year, before.

I was especially pleased with the view of the MCG which was clearer than it had been from the MYKI.

We spent quite a time up the tower but then it started to rain. From such a height it was as if a net curtain had suddenly been dropped over the city.

We still had time to kill but did not know what to do next. We usually try and buy a decoration for our Christmas tree on our travels and this is often quite hard to accomplish. Of course, although in the thirty degree heat, it did not seem like it, Christmas was only a few weeks away and a suitable decoration was purchased in short order. We even had to make a choice which one we wanted !

With nothing to do, we found ourselves a nice bench outside the Flinders Street station of the MYKI. The sun had come back out. We sat in the sunlight doing some final people watching and hydrating ourselves for the upcoming flight by drinking lots of water. Lucie made the final few entries into her journal.

Eventually enough minutes had ticked by and the time came to head into the MYKI, retrieve our luggage from Southern Cross and head to the airport. We took the SkyBus and scampered up the steps to make sure we got the very front seat on the top deck. I hope the “child” we both seem to have inside of us never goes away ! 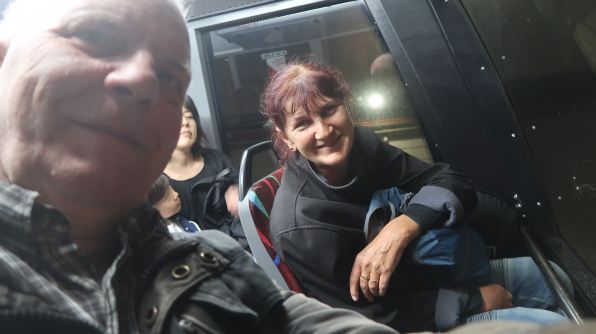 The return flights were similar to the outward ones so I will not bore you with the details.

One thing that did occur to me, however, was that, once we took off, it was not until we were crossing the Black Sea and approaching Romania on the second leg of the flight that we surpassed the distance in the air that we had ridden the Harley on the ground.

Finally, we emerged into the crisp November air of Prague and our friend whisked us rapidly home.

There will be others in front of us.