Our last full day with the Harley dawned bright, clear and warm.

We ate a pleasant breakfast at a little café just up the road from our hotel. It had obviously opened very recently and the two charming ladies who were running it were just a tiny bit disorganised. Both Lucie’s muesli and the eggs I had were delicious.

For our final ride, we drove south of Melbourne to our last great “Hurrah” in what Hana had informed us was some lovely scenery and wine country on the Mornington Peninsula..

I had been obliged to abandon my originally formulated scheme, which had been to visit the most southerly point of continental Australia at Wilson’s Promontory. Getting to the promontory itself was eminently possible. What was beyond us, principally for reasons of time, was the hike from the car park to the tip of the promontory itself. This was a round trip of close to 60 kilometres and would have taken two days. If you ever plan to visit Australia, remember that in a place that is so vast it is all to easy to underestimate “real life” distances from a map.

Instead, we set off for a place called Red Hill, from where there was supposed to be a beautiful view.

We, well Mapy, easily found a place called Red Hill, it said so on the signs. Although it had a reasonable view, it was fairly clear that we were in a completely wrong place. Oddly, Google maps cannot find it, I wish, in retrospect, I had taken a picture of the sign. What can you do ? We typed in Red Hill again – and were duly directed somewhere else, quite a distance away. Off we went.

It was a pleasant journey, through much greener countryside than any we had yet seen. 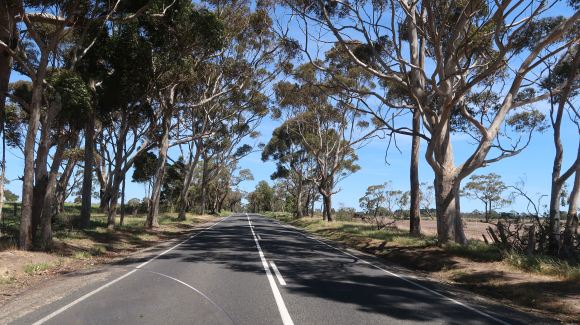 We drove further south and, when we came to the ocean, along the beautiful coastline of the Mornington Peninsula. It was a typical, sweeping, Australian landscape. The customary beautifully surfaced road undulated through an unending series of gentle bends. It was evidently the place to be for Melbourne’s rich and a series of luxury mansions and ranches occupied every centimetre of the cliff-tops. Lucie described them in her journal as being like “South Fork” and it was like riding through a soap opera. 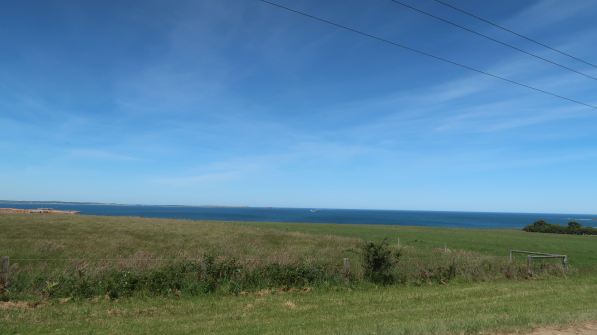 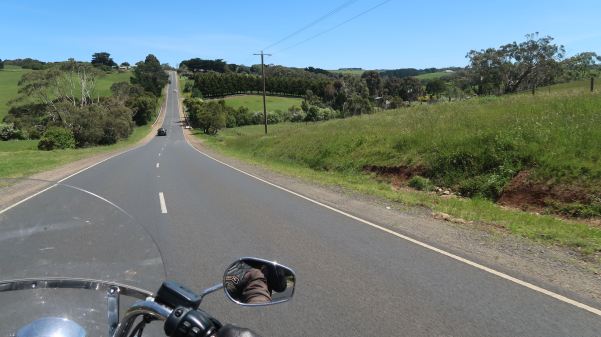 We found the “real” Red Hill and then sought out Hana’s lunch venue suggestion, the Dromana Winery. We chose a looping route down which took us through a couple of nice towns and a few less nice, touristy and kitsch places on the coast. Somewhat sadly, given the glowing “build up” it had received, the Dromana Winery was closed on Tuesdays and you can guess what day it was.

Sometimes, life slaps you one minute and, the very next minute, it gives you a big bonus. This happened again.

I had seen a Kookaburra at Healesville, perched on a bullrush and silently surveying the surrounding reedy landscape for something to become its lunch. As we walked back to the Harley, a Kookaburra flew over our heads. It perched on a branch in a nearby tall Eucalyptus where it emitted its “signature” laughing call ! This would not have meant anything special to 99 point a whole lot of nines, percent of the world’s population. But it took me back to a music lesson in the National School, Toddington, England, probably in about 1961. There, as a five year old who had no idea, at all, of where Australia was, I had sung a song about that very moment with my classmates. I swear my eyes watered and it was not from pollen or dust. Forget Uluru, forget the Nullarbor Plain, forget the Koalas. Ridiculous as it night seem, those 10 seconds were probably my real “Australia Moment”.

Still hungry, we made our way back down to the nearby coast to look for a place we could get something to eat. We rode quite a way, it was early season and although the beaches did look inviting, not many places were open.

Finally, we spotted an open restaurant, in Frankston, called “Waves on the Beach”. For once I am glad that my innate prejudice against places with “kitschy” names was subordinated to my hunger. It was a superb lunch in a top draw place. Good food, good service and a stunning view from its elevated seafront terrace across the blue and crystal clear waters of Port Phillip Bay. In the far distance, certainly at least 30 kilometres away, the gleaming towers of Melbourne’s Central Business District (the CBD) were clearly visible. 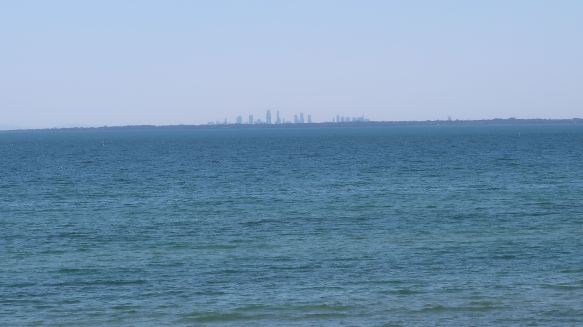 It was a Tuesday, so we took our final “antipodean” TND photo and dispatched it into the wide blue yonder. 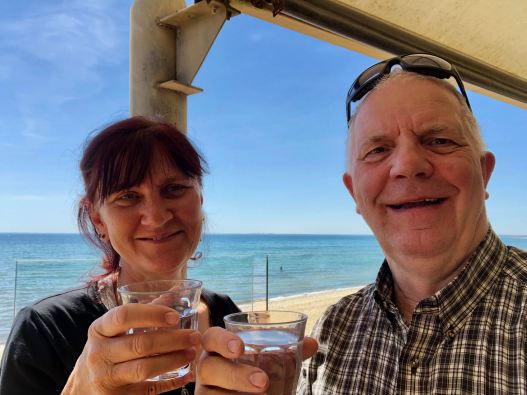 Then we headed back towards the city.

The rest of the ride up the peninsula began picturesque, but this faded slowly into the suburban sprawl of south-east Melbourne. Bird life continued to abound and, all along the way, flocks of parrots and ibises flew over our heads. Lucie was particularly puzzled when she saw what she at first thought was a giant white bird really up high in the sky. It took her some time to realise that this was actually an aeroplane, gliding in on its final approach to Melbourne airport. There were, in truth, very few ‘planes in the skies compared to Europe. How soon we forget !

We returned to Glenferrie where I parked the Harley. I felt a slight tinge of sadness as I turned it off after our last “real” ride on it ! 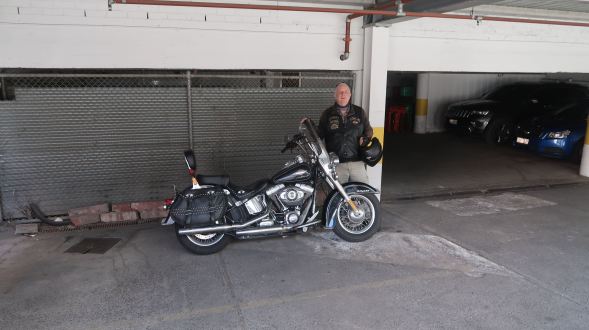 Then we went out to eat. Glenferrie really was a great place to have chosen to stay. The MYKI had dictated our choice, but it was also was near a university. There were a large number of eating places with student oriented prices nearby. Some were fairly eclectic on the cuisine front, food without the things that make it good seemed to be the norm. In the end we found a place that was, nominally at least, Mexican and enjoyed a nice tasty meal.

The end of our motorcycle odyssey was now looming up. The following day we would need to hand it back and head to Tasmania for three nights without it.