We have a lot of friends, scattered at disparate locations all around the world, but for some odd reason a lot of them come from, or live in, Melbourne. Almost fortuitously, two separate ones, both Kiwis, had recently moved from Melbourne and home to New Zealand. Otherwise, visiting all of them would have presented problems.

One who was still there was our Czech friend Hana and she was very keen to be our guide and mentor for the day.

As I half expected, I did not feel too great when I woke up. Doctor Lucie (she really is one, but not of the medical type) determinedly pressed some Clarinase and a Zyrtec into my hand and then watched while I swallowed them. Of course, I felt better almost immediately, but I still have a “thing” against medication. We were in no great hurry. We set off around half past eight and had a nice breakfast in a very upscale bagel bakery next to our hotel. Then we walked the short distance to the train to go to Surrey Hills where Hana lived.

One thing that we had not quite realised about the MYKI was that, like New York, not every train stops at every station. To ease congestion, some trains stop only at pre-determined selected stops and, of course the first train we boarded did not “select” Surrey Hills. The station passed in a blur. Eventually, in a distant suburb, it did stop and we had to find an inbound train where Surrey Hills had been selected. Ho hum ! Thank goodness for mobile telephones and the fact that OPTUS did work in Melbourne.

The Surrey Hills neighbourhood was fairly upmarket. Apart from the almost “exhibition district” of 1930s dwellings we had seen in Perth, this was probably the most upmarket area we saw in Australia. Hopefully, no murdered corpses would be found there after we had just left. Sadly, there is a bit of local “tension” because a lot of houses there, often very expensive ones, have been bought by the Chinese. They do not, however, live in them and many, despite their nominal value, looked neglected, overgrown and sometimes quite dilapidated. The Chinese and their slow infiltration with its economic implications are perhaps, after water, Australia’s biggest problem in the future.

Hana was walking to meet us as we left the station with her dog, China. Hana amusingly described China as a “former greyhound”. Not quite correct, China is still a greyhound, he just does not race in his old age. I can certainly go with that. Like me, he was also docile and amiable.

Hana had obviously been thinking and offered us several tempting diversions. We unanimously decided to visit the Australian fauna sanctuary at Healesville, about 60 kilometres out to the east. Hana promised us nice weather and that definitely came to pass. It was a pleasant trip, in pleasant company. Hana does visit Prague from time to time to see her family, but it was still a while since we had seen her. The journey through pleasant green countryside passed in a haze of catching up ! By coincidence, or maybe by design as Hana is a smart girl, the way took us right past the “Eagle Riders” outlet, in the suburb of Ringwood, where we would be returning the Harley a couple of days later. We were able to orient it with the surface transport we would need to get back into the city, so that was handy.

Healesville was a true gem. It is as “natural” as a zoo can really be if you do not want the animals to escape and run away. Not that many seemed inclined to do much except sleep anyway ! We finally saw all the animals we had hoped to see, but which had eluded us and others that we would never have seen anyway. These included Dingos, the Australian wild dog and the elusive Wombat.

It amused me, hearing the ladies chatting away in Czech, to find out the Czech word for Wombat was, wait for it ….. Wombat ! They are big, brown marsupials and were doing what Wombats do most, in Summer, sleeping in the 25 ° C heat.

Among the reptiles, we found our acquaintance from the Nullarbor, described there as a Shingleback Skink. The huge, red fringed mouth was again in evidence but, according to the informative posted blurb, its tail looks like its head. We had not noticed this in the outback, it had refused to walk away from us. It seems that, if something seriously attacks the creature, it protects its head by using its tail as a distraction.

We went through a parade of beautiful parrots and predatory birds, including a Bald Eagle. I even saw my first Kookaburra. It was a giant, less colourful, antipodean relative of the Kingfisher about which I had learned a song about sixty years previously.

There were huge cages for the less ferocious birds, like parrots and these were a feast for the eyes. Large and small birds of all colours and types hopped around our feet, flew above our heads or chirped merrily in the bushes a few feet away. Attendants handed out small bags of food and many of the bolder little avians would take it from the palm of your hand.

In one enclosure, we saw that normally shyest of birds, the Lyre bird. These are less ostentatious, but otherwise quite similar to a Peacock. They are not particularly rare, but they are secretive and rarely seen. Hana was beside herself because, even after over 20 years in Australia, she had never before set eyes on one. Strangely, although elusive, a Lyre bird is a wonderful mimic and is said to be able to imitate, very precisely, almost any sound. 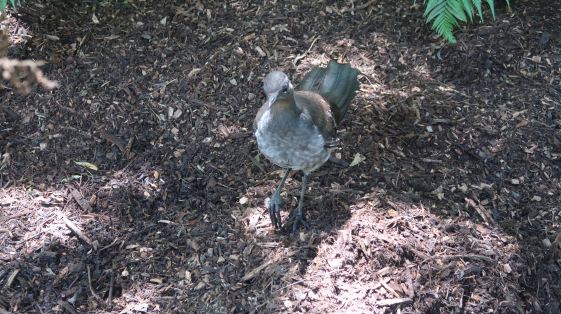 Outside, numerous Ibises were walking around. My cheerful comment, when snapping the ladies in the midst of these, that “Not all of these strange looking birds are Ibises” was received in stony silence !

The list went on. In nature terms, Healesville was a cornucopia of delights. In a darkened aquarium, we were centimetres away from Platypuses swimming behind glass and, right outside, were Echidnas (a hedgehog type of creature). These both belong to the exclusive group of only two species called Monotremes. The Platypus and the Echidna (of which there are 4 sub-species) are the only mammals that lay eggs instead of giving birth to live young. The mother does, though, suckle the babies. 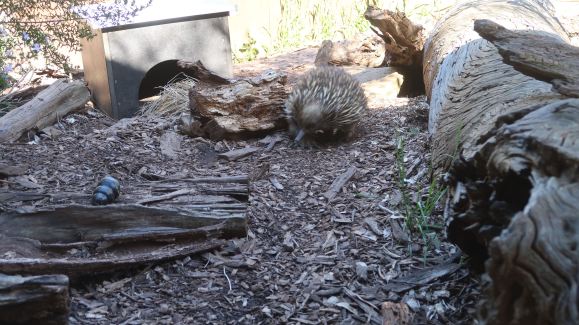 Then we found, and were surprised to discover, that the Tasmanian Devil (of famed mindless cartoon ferocity) does not look so furious at all. Far from being a blur of claws and teeth, two were quietly asleep in a low fenced enclosure.

Next door, far more tightly enclosed, were Possums. Several species of Possum are found in Australia and they are the scourge of the gardening community. Protected by the law, if they move into an area there is nothing anyone can do. They are the furry equivalent of locusts and whilst nets might impede them they do not stop them. Rick had said and Hana confirmed, that planting Chilli peppers does deter them.

Of course, the true “Crown Jewels” were the Koalas. There was a big group of them, about fifteen in total, in a pen. Only a few metres away, in life, they are actually surprisingly large. For some reason, perhaps because there were very few people around, they probably wanted to show off. They were all moving around the branches, something Hana had never seen them do, climbing up and down and biting the eucalyptus branches as if their little furry lives depended upon it. Fascinating. 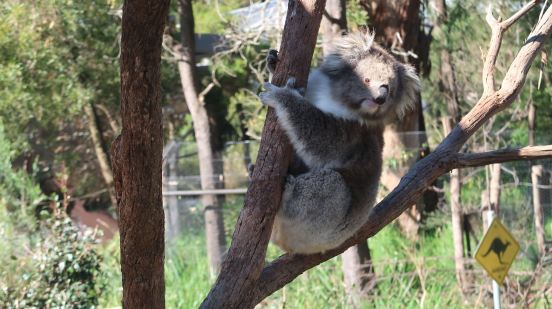 What could top that ? Even walking out through an enclosure where kangaroos were literally asleep on the path or hopping about at our feet did not even come close.

We had dinner at Hana’s house. We sat with her and her husband John and Eliška, their 18-year-old daughter. Eliška, was on the verge of high-school graduation and crept away at the earliest opportunity. This was not to play with her telephone, as most teenagers do, but to to study some book on pathology which she hopes to pursue as a career.

We arranged to meet Hana and John for dinner on our final evening in Australia and then headed home on a train which, fortunately, stopped at Glenferrie.

My cold seemed to have left me and we planned our final motorcycle jaunt for the following day.