The next morning, as we continued to head south, we were actually rained on ! It was not very heavy though and it did not even penetrate my fabric jacket. It soon stopped, but unfortunately it had been heavy enough to wash my carefully collected and fairly comprehensive collection of Australian flying insects off of the Harley’s windshield.

We stopped for the briefest possible period at the resolutely inhospitable services at Pimba and then continued south. A solitary emu was still pecking disconsolately at the brush on the approach road. If it was the same one that we had seen on our way up, that would speak volumes about the general “amenity” of that whole zone.

Somehow, in Pimba, our intercom stopped working. A wire had parted somewhere in the inner reaches of my helmet and we were never able to locate the cause. The vendor did, in about 2 minutes, but not until we had returned to Prague. This, sadly, meant we had no further inter-helmet discourse for the rest of our trip. In order to navigate through towns, we had to develop a system of touch initiated direction changes that, in general, worked quite well.

As ever, the roads were fringed with innumerable dead kangaroos in all stages of decay from just deceased to patches of blackened hide with bones gleaming whitely. A little further on, unable to talk to each other, we met our first live kangaroo that was actually hopping down the middle of the road. I stopped as quickly as I could, but it seemed to take Lucie an age to get the camera into action. Almost as if the kangaroo knew what we wanted, it jumped happily backwards and forwards across the road, first there and then back, for some minutes. Finally, it went into the low shrubs nearby and casually hopped over a 2 metre high piece of fencing as if it was not there at all. As a grand-finale, it re-hopped the same fence with casual disdain, hopped back into the road, took a long look at us and then disappeared into the brush. We would not have been surprised if it had pulled a camera out of its pocket and taken a picture of us. 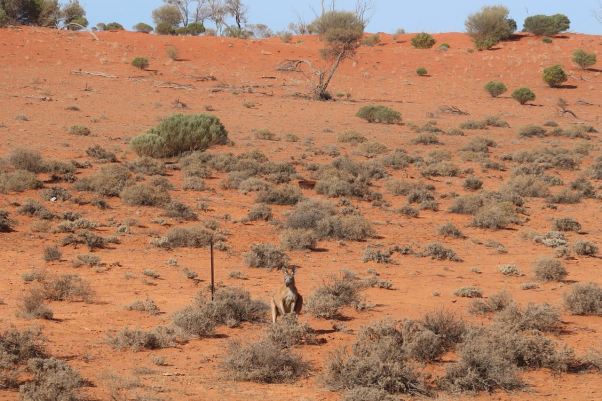 I have already mentioned the raptors and scavengers which gorge themselves on those kangaroos that are unfortunate enough to have a terminal encounter with a car or a road-train. The largest of all of these, in Australia, is the Wedge-Tailed Eagle and it is also one of the largest raptors in the world. As we had moved south, these had replaced the Black-Shouldered Kite as the largest bird we saw regularly. The kites were large, the eagles were huge. The eagles were also less wary and, where the kites would take wing as soon as they saw us coming, the eagles would be much less frantic about it. The previous day, we had pulled up about 5 metres from where an eagle was sitting in a tree. After a period of disbelief, Lucie had managed to snap it, just sitting there, without “spooking” it into flight. Now, we came upon one sitting in the road. It took to flight with almost calculated arrogance and, when we got home, we found Lucie had managed to capture that moment with the aplomb of a distinguished wildlife photographer. 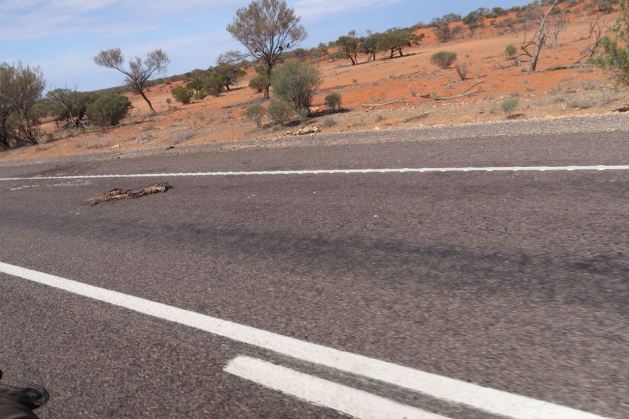 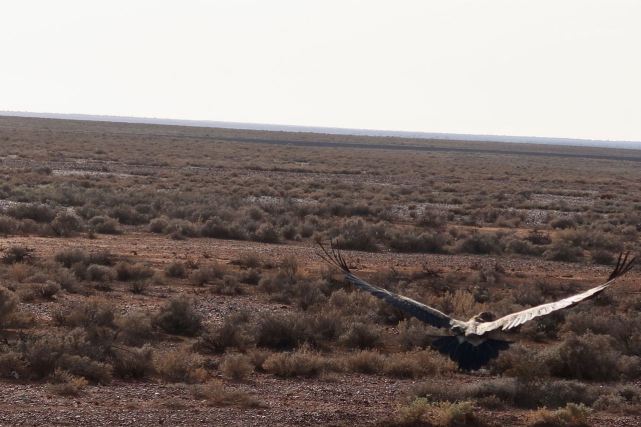 Wildlife aside, the landscape between Pimba and Port Augusta is still a bit monotonous. There were some beautiful, uninterrupted views of the some salt lakes, but we were most taken by the occasional railway line. As the track, it is almost invariably a single line, was there first, the road had to be constructed over it. In several places, these overpasses provide a dramatic view of the railway line stretching away, as straight as any arrow, into the haze of infinity. 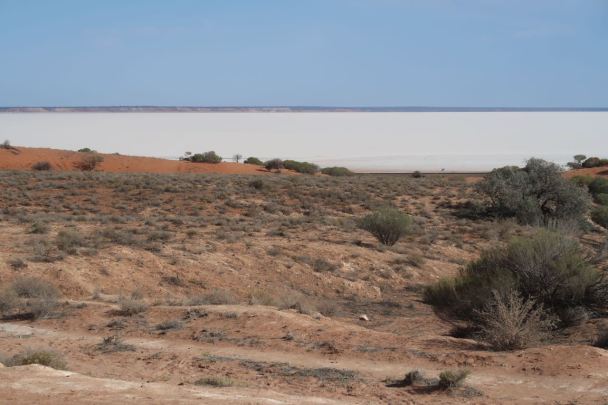 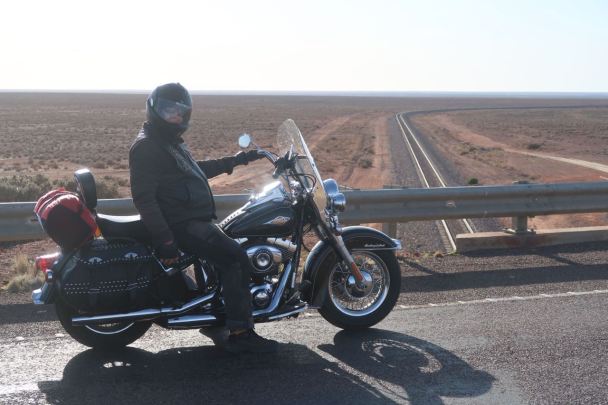 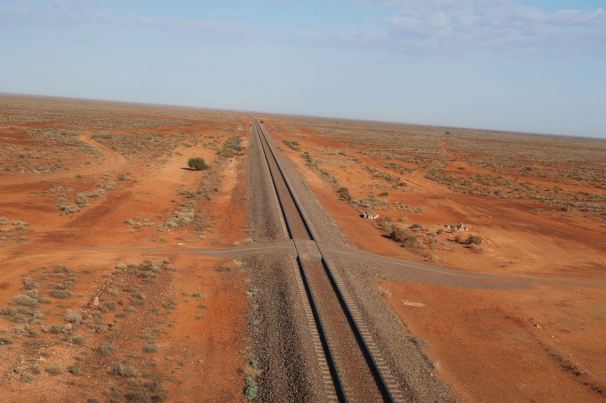 We finally arrived back in the relative civilisation of Port Augusta. It is odd how quickly our senses had adjusted to a whole lot of nothing and, although by no means a bustling metropolis, it seemed huge and overcrowded. Yet again, I filled the Harley with petrol and topped up my own tank with iced coffee. Then we headed back out of town and took the A1 or Eyre Highway as it is known, headed west. We would be heading on that basic compass heading for some days to come. Perth, our destination, was nearly 2,500 kilometres away and did not, at that point, even warrant a mention on the roadsigns.

As I keep saying, on a long trip, you have to grab amusement where you can find it. After about an hour we came to what is, to schoolboys at least, the humorously named town of Iron Knob. My lovely wife, being of a more cerebral mien, was baffled by my insistence at having pictures taken with the town sign and mystified by the one I insisted of taking of a board saying “Iron Knob Golf Club” ! 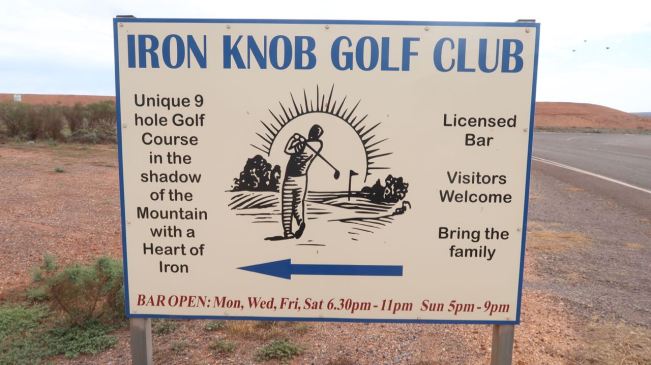 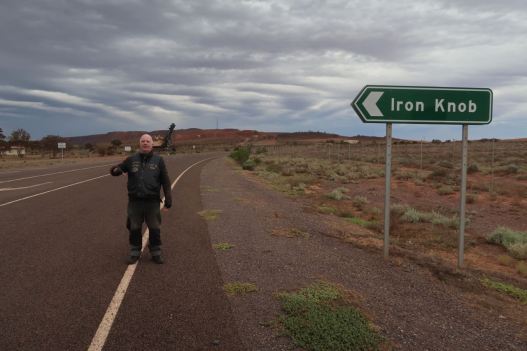 We then drove into a landscape that was completely different from any we had then seen so far. It was rural, but in a different way to how that term had been defined in New South Wales. There were fields and fields and fields, often huge ones, rather like the Prairie, stretching as far as the eye could see. There were also countless eucalyptus trees, both beside the roads and bordering the fields. It was already easier to recognise that there were so many discrete species. There were also countless other plants of diverse types, many of which we had not previously seen. I expected that, internet permitting, Lucie would soon be finding out what some of those were. We were in what was obviously Australia’s equivalent of the “corn belt” as huge grain storage silos were to be seen at every tiny railway halt.

We finally came to Wudinna and easily found the Gawler Ranges Motel. With such a diverse range of accommodation types available, it is hard to draw direct comparisons, but if I were to be handing out prizes, this one would easily top the “motel” category. 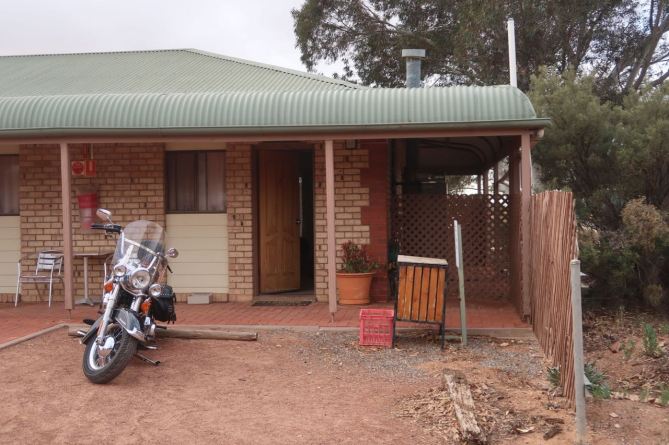 As always, they stuck us in the very farthest corner. Australian’s appreciate plain speaking, so I gently enquired of the proprietress as to whether this was because we were bikers. She practically giggled and it appeared that it was anything but that. Almost all the motels and roadhouses are beside main roads, down which, in the hours of darkness, road-trains thunder noisily. For this reason, it is generally considered that the farther it is from the road, the better the room. We had never thought of that. So we had the farthest room and we even had a back porch. The shower was also better than it was in the luxury hotel in Uluru. The dinner was also excellent. I chose fish and chips yet again and it really was way above average.

It was also, yet again, a Tuesday. Thanks to the return of the internet, a suitable snap for our TND friends in far off Prague was duly taken and dispatched into the ether. 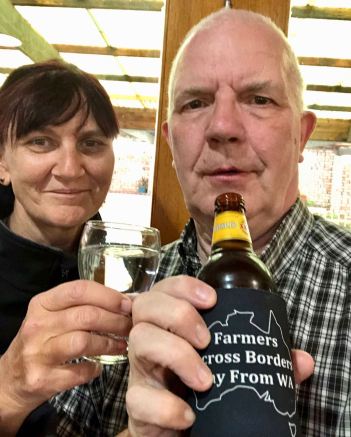 As we left the restaurant, a huge road train rumbled past in the direction of Perth. They really are quite noisy. Concerned mainly about the “bow wave” of displaced air they created when they passed us, we had not realised, because of our helmets, just how loud they actually were.

It disappeared into the darkness. The following morning, we would be on its heels and heading for the wastes of the Nullarbor Plain.