In the morning, we were awakened, well before dawn, by the shrieks and calls of hundreds of “galah” parrots in the nearby eucalyptus trees. Their sheer number was quite amazing. Although not as intensely hot as in Uluru, only 24 hours previously, it was still warm enough to take notice of. On the Harley, as we drove south, it was definitely cooler and the colour of what undergrowth there was subtly changed. South of Marla, some of the shrubs were just beginning to bear bright green leaves and others were already blooming, with timid yellow flowers. The sky was uncharacteristically cloudy. Not dark, threatening clouds, but the wispy, high-up ones, in interesting patterns. Huge Road-Trains thundered periodically past us and disappeared into the distance ahead. 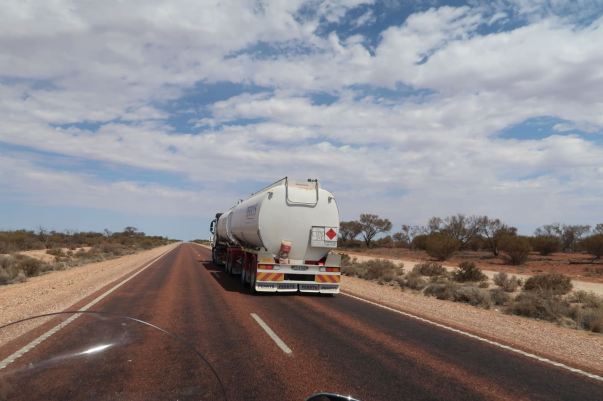 We stopped at the welcoming Cadney Homestead for a hearty breakfast and, of course, refuelling. Then we set off towards the next petrol pump that was in Coober Pedy. Again, as we approached that town, we could not help but be amazed by all the piles of sand that dotted the terrain.

The town of Coober Pedy stands where sediments deposited in the Tertiary Cretaceous period have turned into kaolin. In those prehistoric times there was obviously plenty of water all around, because half of Australia (plus or minus the entire eastern half of the continent) is one large artesian basin. Silica, which is water-soluble, penetrated deep into cracks in the rock where the beads of silica formed a silica gel. The gel then gradually hardened and, in places where it remained squeezed between other fossils and clay layers, veins of opal formed.

Thus, opal is essentially quartz and consists of grains of silica. Opal is found in a variety of shades, milky white, grey, blue, black or colourless and all types characteristically reflect the spectrum of other colours. The rarest form is black opal which is obviously the most sought after. Black also shows the play of light the best.

Of course, all this information is distilled from the countless, complicated treatises that exist on the subject and are the underlying reason for all the activity in that inhospitable and otherwise deserted area.

In Coober Pedy, as always, I refilled the tank with petrol and myself with iced coffee. At the pump, we also met a large tanker truck, delivering the petrol, which was boldly emblazoned with our favourite logo, “Perry’s”. So that was what that enterprise did !

At the edge of town, we came back to the main north-south highway. Port Augusta was on the sign, south it was ! 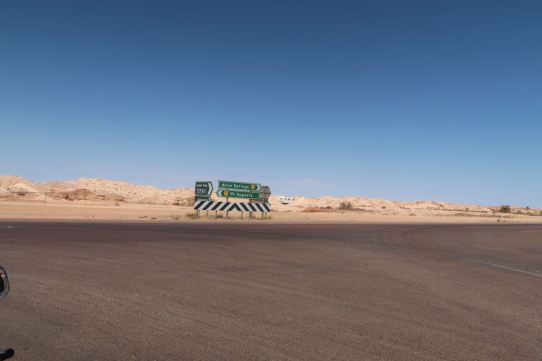 Along the way, we usually exchanged a few words with almost every traveller we met. It was customary and quite refreshing in what is an increasingly insular world. Australians manage to be friendly without being intrusive. They are happy to swap two or three sentences, sometimes jokingly, sometime seriously, but then to go their separate way again. There was always genuine interest in where we were going and in where we had been. It was quite endearing and something I missed when we got home. That day we met an Australian at a rest stop who was touring on a very serious looking Yamaha motorcycle. He was heading towards Uluru, hoping to climb it as we had and he seemed genuinely grateful for our “expert” advice.

As I previously remarked, to breakdown or suffer some other driving mishap so far from “civilisation” generally means the end for the vehicle involved. Periodically we passed terminally broken or burned out vehicles abandoned in the roadside brush. 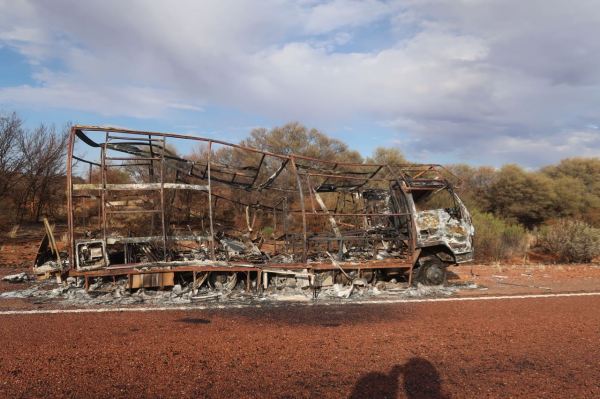 The distance between Coober Pedy and Glendambo was actually the longest that we had to travel between available petrol on our whole trip. Although low-fuel had not manifested itself on the journey north, it did in the other direction. By the time we reached Glendambo, the warning light was again flashing rather worryingly, but we did make it. The tank did need over 18 litres, which meant it was actually even more empty than on our fraught night trip back from the Olgas. Despite seeming like ancient history by then, that had been only two days before. At least the second time was down to distance and not stupidity. As a precaution, we were carrying an emergency petrol transfer hose. It was reassuring to know that we were now quite unlikely ever to need to unpack it.

There were still more dead kangaroos than it was possible to count. The black Shouldered Hawks were busily gorging on them, deigning only to rise in the air as we approached before dropping down behind us as soon as we passed by.

Our accommodation in Glendambo was a “budget” room, which had been the last one available. It was cheaper than a “standard” room, but we could not see much difference. The shower, kettle, tea, coffee, milk and water, were all there, as was, thankfully, the bed, We both felt that, although a tiny bit shabby, it was good value, in such a Godforsaken region, for AUD100. What was not there was the Optus signal, so we were without WiFi. The signal had not been much the previous day at Marla, but in Glendambo there was none at all.

Amazingly, a few drops of rain fell in the early evening, but Lucie was unable to consult her weather applications. We had to do our forecasting in the “old fashioned” way, which was by looking out of the slightly dirty window and into the great beyond.