When my alarm clock woke me up in the morning, it was raining – and quite hard. Lucie, who had enjoyed a fun evening after I fell asleep installing various weather applications, was not surprised by this. Fortunately, according to those forecasts, it seemed that the most rain would be around the coast to the southeast coast, which would not interest us for a few days to come, if at all.

Our principal goal, that Saturday, was to pick up our rented Harley, so the local weather was important. In the event, the worst rain had gone before we even went to breakfast.

The following Monday was Labour Day (the aforementioned long weekend) and most cafés were closed. We walked north again, along Kent Street towards the Bridge and right along Argyle street to small area of the tourist and artisan shops. Fortunately, the cafés there were open and we helped ourselves to a substantial hot breakfast in the Pancake House.

When we set off to pick up the motorcycle, the sun was already high in the sky. According to the map it was 12 km to EagleRiders and, by metro, it was only 4 stations away from the stop below our apartment. Lucie is a great organiser !

One thing I do like about EagleRiders is that they are efficient. The pick-up was smooth and easy and could put some rentals that are in Harley dealerships to shame. The  local operator, was a real biker, you could just feel it. I thought his name was Syd, because that was what his email address said on the card. I must have still been a bit dopey as it obviously (in beautiful 20×20 hindsight vision) referred to Sydney ! Obviously, because we already have a Harley, there was not much familiarisation needed and, when I asked if we could have the screen fitted, “Syd” popped it on in seconds. In hindsight, I was very glad I asked. 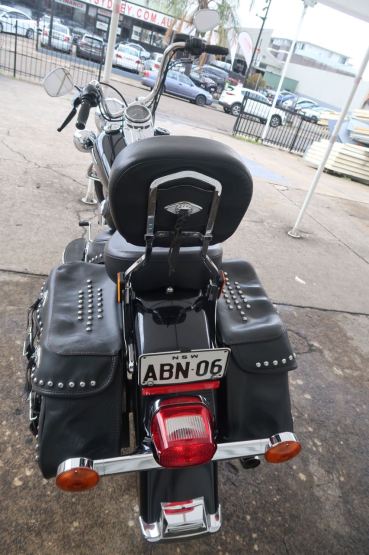 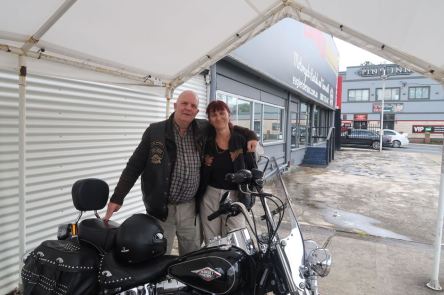 Once we were motorised, we decided to cross the Harbour Bridge to North Sydney and take pictures of Sydney with the Bridge and the Opera House. The Lonely Planet book (Looney in our parlance) advised a very clever place for such a photo. This was in Blues Point, which is just over the bridge to the left when heading north. It was plain that this suggestion has been read by a lot of people and the viewing area, at the far tip of Blues Point Road, was quite crowded. Eventually, we got to the front and took some suitably “kitsch” snaps !

It might be worth recording that, when we went there again after dark, we were quite alone. 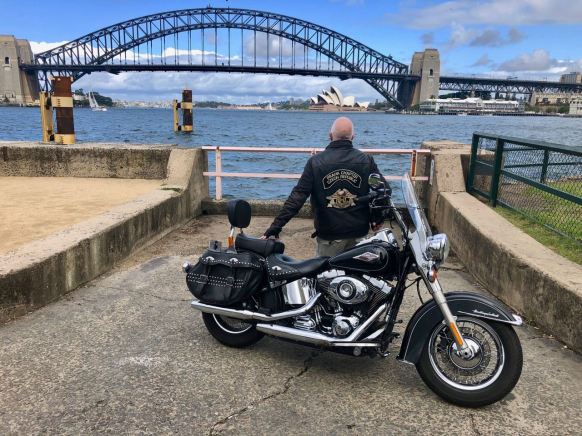 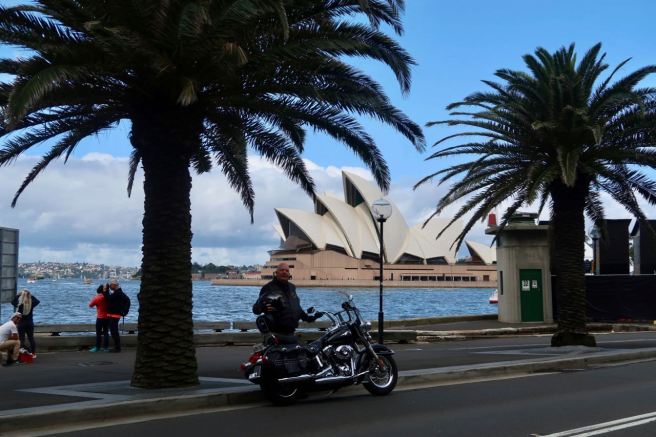 Because we felt it was a little unlikely that we would ever be in Sydney again, we needed to conduct a high-speed attack on the other things that interested us.

I chose the Sydney Tower Eye, a lookout tower with a viewing floor about 280 metres up. I really enjoy things like that !

Lucie chose the Sea Life Aquarium. She had read about this in the first Jo Nesbo Book, “The Bat” and wanted to see it,

Tourist Sydney, as I have said, is quite small, so we easily managed to do both.

The tower was quite well visible from almost everywhere and was on Market street, which crossed our already well-frequented streets called Sussex, Kent and York. I told Lucie that I found it slightly confusing as these “locations” were not positioned geographically as their namesakes are in England. She gave me one of her looks that implied how fortunate she felt that this type of knowledge did not burden her !

We found the tower without any problems and went to the 5th floor, as indicated. However, this seemed to be a gallery of shops and restaurants. We spent at least 20 minutes searching between shops and dining rooms for another elevator up to the observation deck. We were not alone in our quest as it was obvious others were doing the same thing. After a trip to the 6th floor – and back down again, we finally found the required elevator right by the toilets with no clear sign visible, even when you were standing right by it !

This, at least, took us to the box office. We bought a pair of pricey tickets for the tower elevator which would take us to the top. We were assured, at the box office, that everyone complains how poorly marked the elevator is and that they could not find it. It seemed curiously un-Australian that this was allowed to persist.

After the ubiquitous security procedures and a short, but informative, film, we took the elevator to the top. This was a little bit like being fired upwards in a rocket !

The views over Sydney were quite spectacular, with helpful signs on the floor telling you what you could see. The Harbour Bridge was pretty obvious to the north. Despite a bit of heat haze, it was possible to see almost out to Bondi to the east, the Sydney Cricket ground to the south and Darling Harbour, where we had dined the previous evening, seemingly almost at our feet to the west.

From the tower, we headed to Sea Life, which is in Darling Harbour, at the opposite end of Market Street. Parts of it were breathtaking. We saw a huge variety of fish, corals, jellyfish, sea urchins, turtles, sharks, huge stingrays and just about everything else you would never, ever actually want to meet in the sea. There was an underwater tunnel and you could look even the most fearsome of the denizens of the deep almost straight in the eye ! It was quite an experience.

There were also some King Penguins. Sadly, they did not seem anywhere near as vibrant, in captivity, as those we had seen, in the wild, in Tierra del Fuego two years before. One was standing motionless and just staring at a pole. I love penguins and I was sorry to see one so depressed.

In the evening, we rode the Harley back to North Sydney and had a great meal in an Indian restaurant which had a distinct Nepalese ethos. Very tasty !

We also rode back to the same vantage point as earlier in the day for some final, night-time, panorama shots of the bridge. 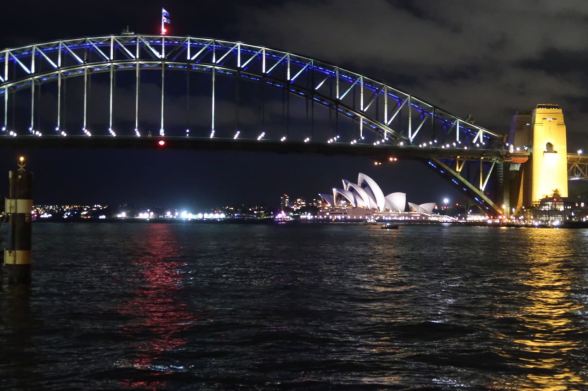 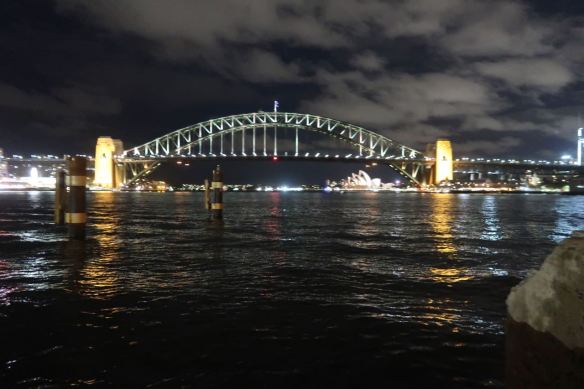 The acclimatisation was now behind us.

The following morning our long Australian pilgrimage would begin.