The morning started with the packing of the motorcycle. This, in our travels, is Lucie’s responsibility and is no fun for her at all. There is always a snag. On this occasion, the principal problem was the absence of a rack. My pre-occupation with the screen (Henry Cole had said one was advisable) had, somehow, prevented me noticing there was not one. There were two, quite roomy, saddlebags and we had packed the absolute minimum, but attaching a bag (one of our red twins) to the carrier using straps, when the carrier is missing, is a bit of an impossibility. Additionally, chaos surrounds everything in the first few days. At first, we do not have the right local understanding of what needs to be on hand, what needs to be specially protected and what should be made difficult to be quickly removed by thieves. Over time, it settles, but for the first few days it is always stress. In the end, we contrived to affix the second bag to the rear of the backrest, but it was a bit saggy and it was plain we needed to give it some further thought.

We quickly gulped down our remaining food, but skipped a formal breakfast so that we could be on our way.

The weather, in Sydney, was cooler than the day before, but not unpleasantly so. As soon as we left the city, the temperature started to rise and did not seem to stop all day. It was only about 22 degrees, but in the sun, it seemed warm enough. In the afternoon, a good wind with sand particles was added. A slight haze of sand quickly took the shine off of the bike, but with the visors down to keep it out of our eyes, it was nothing dramatic. 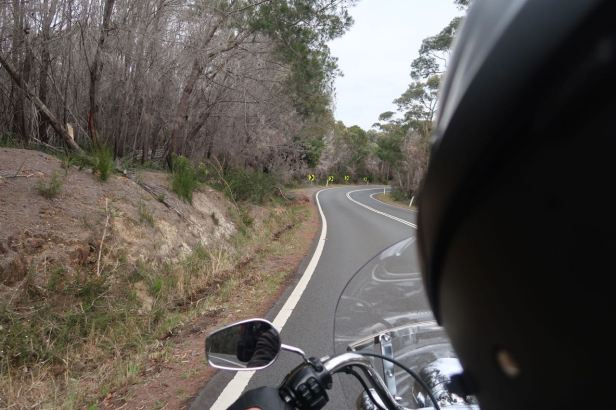 Before leaving Prague, Lucie had downloaded a Czech maps application (Mapy) to her iPhone and this was to prove superior to more “famous” map applications throughout our trip. Intercoms on and iPhone in hand, we set off. This worked quite well, but Lucie’s brain had not yet adjusted to driving on the left, so we did miss a few of the off ramps at first and exits at large intersections were a bit of a trauma. I had to reverse direction a few times and, bidden by the voice in my ear, made a few “illegal” turns. At one point, I was inadvertently guided the wrong way down a one-way street. Luckily, it was early on the Sunday morning of a holiday weekend and, although we got the odd curious look, we encountered no policemen. In the end we got the hang of it and found the Princess Highway south towards Canberra. 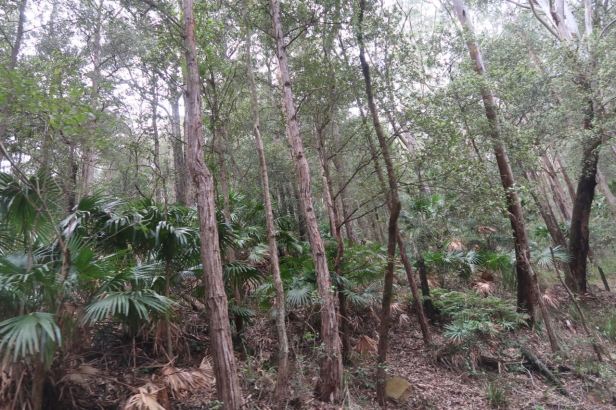 Our original plan was to take the highway for quite some distance and then branch off and go to the Sea Cliff Bridge which was billed as being very scenic. When you are touring, however, plans tend to be slightly nominal. When, in the cutely named town of Waterfall, we saw a sign that said “Pacific Scenic Drive“, we immediately succumbed to the temptation to explore it. This was despite it being some distance before our planned turn-off, .

It was a nice deviation, through the Garwarra State Conservation Area. A small road wound through the bush and we were afforded our first tastes of the flora and fauna to come. Sadly, it appeared that half of Sydney had decided to drive it with us. For the next fifty kilometres, we were limited to driving in a column of cars, crawling at around 40 kph as we followed hordes of Australians heading out for a picnic. At the coast, all the cafés with a view were full. We were, however, able to get a very nice breakfast without a view. The Sea Cliff Bridge, which is near Coalcliff, was our first “planned” destination. It is an impressive feat of civil engineering and looks elegant from a distance. Sadly, once you are actually riding on it, you cannot see over the side – and you cannot stop.

We wended our way down the coast road as far as Thirroul and then turned back inland to the M1 which we followed south to the B86. Then, we followed the B86 as it cut back in a mainly north-westerly direction until we came to the M31 Hume Highway where we again turned south. The huge stretches of countryside with very little, apart from mine entrances, to indicate any kind of habitation, were a little disconcerting to our European sensibilities. There was very little traffic on the wide, well surfaced roads and we made good time.

I am quite a fan of cricket and our next destination was the small town of Bowral. This was the birthplace of arguably the finest cricketer of all time, (Sir) Donald Bradman. The local cricket oval was where the young Donald had first played and I wanted to see it. Lucie would be the first to admit she had never heard of him, but luckily, as ever, she indulged me.

We left the M31, at Aylmerton, for the smaller, more twisty, B73.  We wound our way through the very rural townships of Braemar, Balaclava and Mittagong until we came to Bowral. It is a site of considerable cricketing pilgrimage and there were plenty of “Bradman” oriented businesses. There were large signs directing us to one of the world’s most significant cricket fields and we found it easily. There was some kind of agricultural show happening on the oval itself (sacrilege!) but I was able to tread, briefly, upon the hallowed turf. There was also a statue of the great man which, if it is accurate, would imply he was somewhat shorter than I thought. I had my photo taken beside it, in an identical pose and was saddened when Lucie said Sir Don was more handsome than I am!

Regrettably, she is almost certainly right. 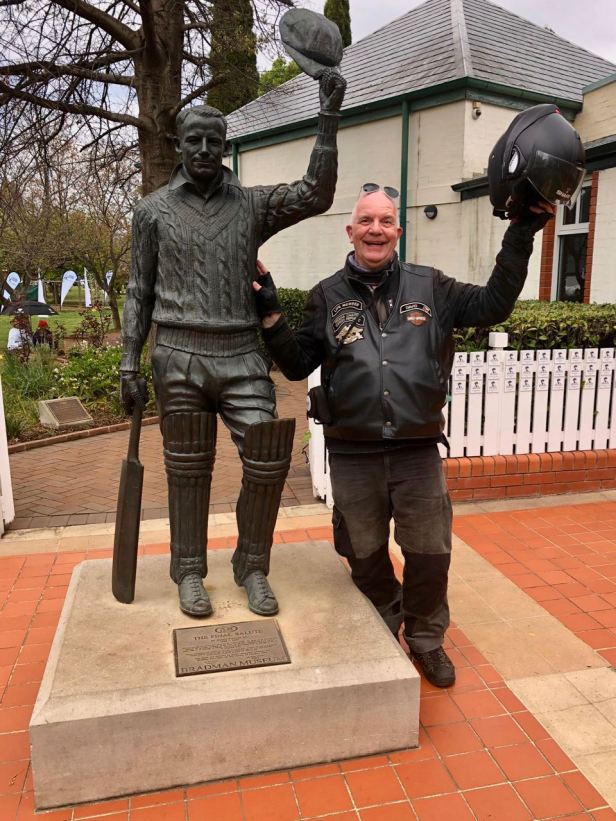 Mission accomplished, we headed out of town again. We continued down the M31 to Yass and then turned onto the B94, which would eventually lead us to our planned stop for the night in Temora. No doubt aided by the nearness of Bowral, cricket grounds were everywhere you looked. There were some that did not even seem to be in towns. Cricket is truly a national sport and obsession in Australia.

In accordance with our health instructions, we stopped several times along the way to stretch a little and replenish our fluids. When we asked about soft drinks in a bar in the town of Gunning, a lady who was running the bar (and who looked like a vicar’s wife) expressed surprise and told us that people go to the pub explicitly to get drunk. Australians are simply their own people and say what is on their minds. You like it – or you do not. That is up to you. In truth, if I lived in a sleepy, out of the way town like Gunning, I would probably adhere to her maxim myself.

Although our distance of travel was below what we planned, if not needed, to do every day, it still took us much longer than we expected. The messing around in Sydney, the trip down the coast and the “devotions” in Bowral had all eaten into our schedule. Even so, we finally arrived at least an hour and a half before dark because, fortunately, the clocks had (unbeknown to us) gone forward the previous night which had lengthened the evening.

In Temora, we soon found the eponymous Temora Motel. It was a motel straight out of a Hitchcock movie, pleasant, but be careful when you take a shower ! Temora actually made Gunning seem like a thriving metropolis so, when we went to dinner, there was not much to choose from. We found a Chinese restaurant, where we ate a tasty meal. Despite the fact that we were obviously not native Australians, we elicited little interest. So many diverse nationalities are actually living in Australia that, no matter your accent, everyone seems to assume you live there too. 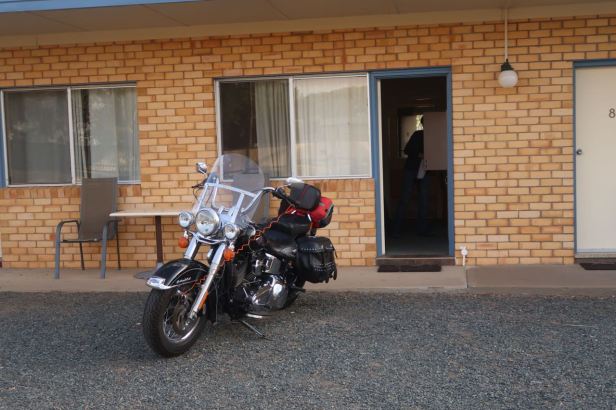 After returning home, we each took a shower, while the other one looked out for Norman Bates. I was feeling pretty tired and immediately fell asleep as soon as I stretched out on the bed. Lucie worked out the itinerary for the next day and recharged everything that it was possible to recharge. We had four USB cords with us and they were all in operation!