I do not usually suffer from “jet lag” so, whether it was that phenomenon or just good old excitement that woke me up several time in the middle of the night I do not know. Suffice it to say, I did not sleep very much and was raring to go at a thoroughly ungodly hour. 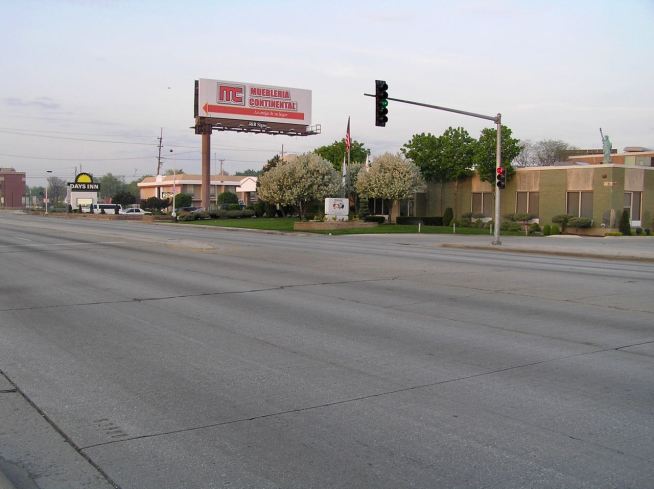 I ate a quick and slightly weird (as I was to find) breakfast and waved goodbye to the Day’s Inn. Then I ambled the couple of miles to Touhy Avenue and the Eagle Riders shop (419 W Touhy Ave, Des Plaines, IL 60018). The route, which cut through the urban wasteland of the northern airport environs was, like most of America, not designed for people who walk and a bit tricky in places. Even after walking for over 40 minutes, I was still there way too early and had to wait, sitting on a low wall, for the staff to arrive. 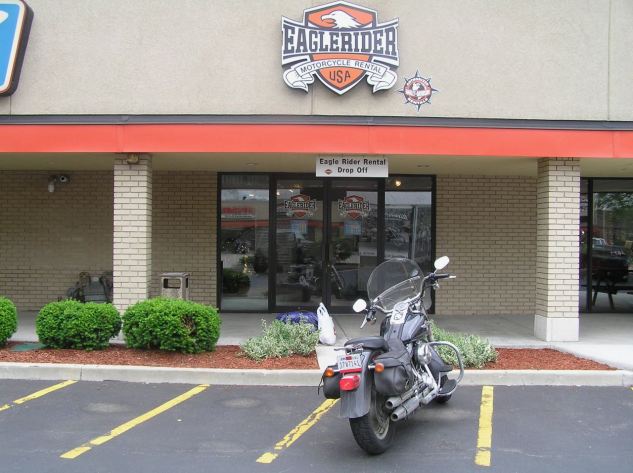 The customary American punctuality prevailed, the shop opened on time and the Harley, a FatBoy, was duly awaiting my attention. The collection procedure was quite speedy, by the standards at the time, but still took over an hour (the formalities on my rental, in Australia in 2019, took less than 10 minutes). I was shown the bike, handed a cable-lock and pointed in the direction of the Sears’ Tower. Only one tiny omission was made in my comprehensive instructions and that was to cost me dearly a few days later, but that was in the future. I put on my helmet, my shades (obviously), threw my leg over the pleasingly low saddle and headed for the city. 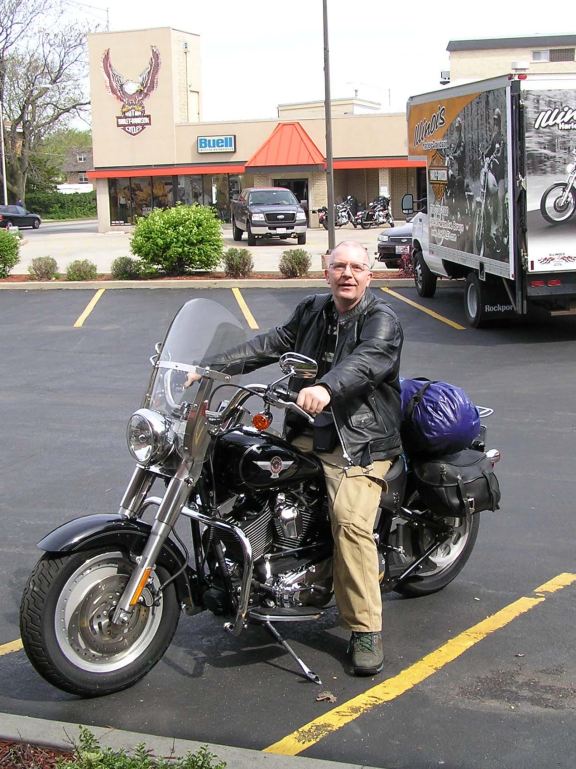 The fun had started. 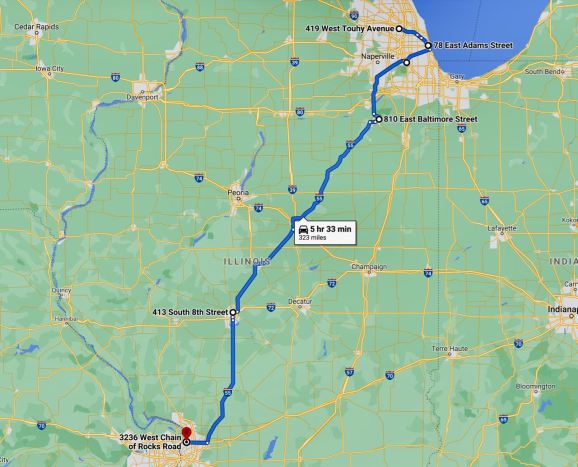 To be frank, it was sometime since I had ridden a motorcycle in such a traffic-rich environment in which I did not really know where I was going. The first few miles were a bit of a trauma. The FatBoy had plenty of what us bikers call “grunt” but it was not fast by any stretch of the imagination and with large numbers of very large cars speeding around which DID know where they were going, caution was top of my agenda. 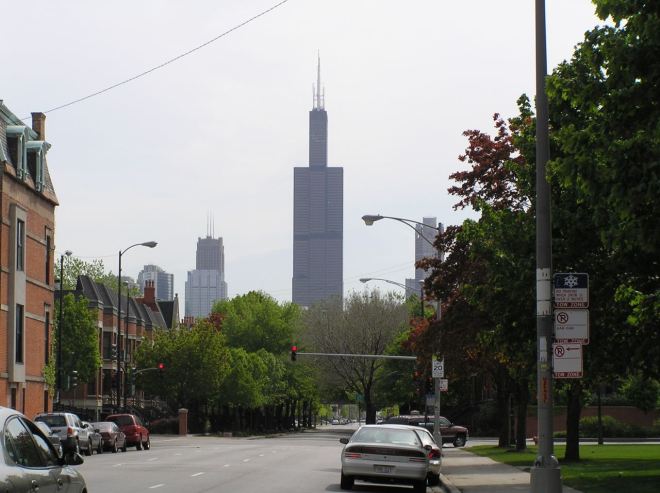 Because of its imposing height, the Sears Tower (233 S Wacker Drive, Chicago, Il 60606) was clearly visible, but getting close to it proved problematic and it was quite some time before I managed to park near to its base. I took what seemed to be the overly rapid lift to the SkyDeck, a rather alarming glass floored lookout point 103 floors and over 1350 feet above the city. It was my intention to take a picture of the bike from the top, but I simply could not pick it out ! The view of the city and nearby Lake Michigan was a bit hazy – but spectacular nonetheless. 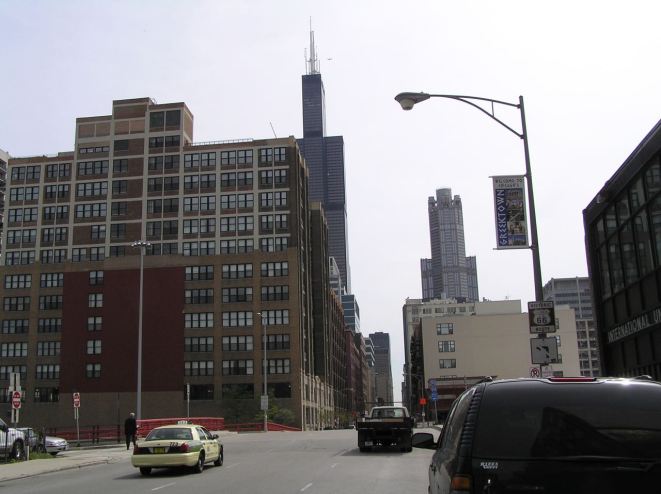 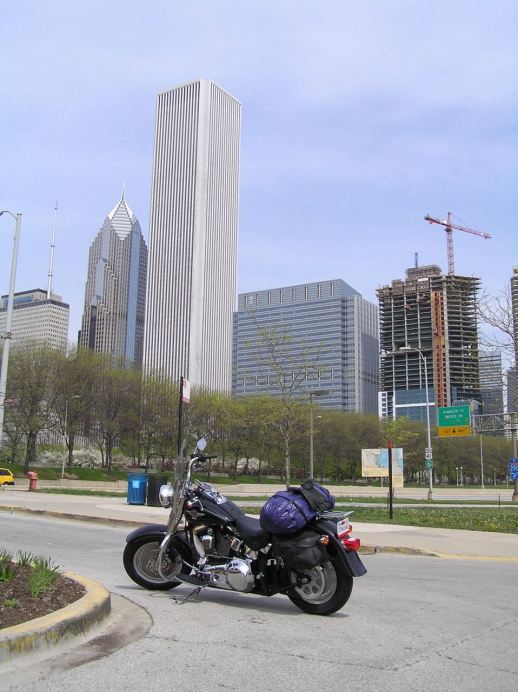 I do not suffer from vertigo, but I was pleased to be back at ground level. I was not in any kind of hurry, but despite my early start, the day was slipping away and I wanted to get onto the road. 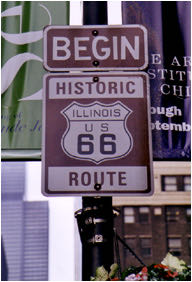 I probably need to say at once that although there are periodic and fairly distinctive signs marking the route, there are some sections that appear devoid of them altogether or are, at least, counter-intuitive. Also, much of the original Route is now an Interstate with a totally different number. Needless to say, within minutes, I was passing the Sears Tower again before the Route dog-legged first north, then west and then finally South down the I-90. The I-90 eventually branched into the I-55 which, essentially follows one of the configurations of Route 66 as far as St Louis.

Again, I must stress that there was nowhere near as much readily available information when I was planning and riding this trip. There are now countless internet articles on the subject which, ironically, might make it even harder to plan if strict historical accuracy was a requirement. All I can say is that the I-55 was dotted with the familiar brown signs and I passed a number of seemingly authentic sites along the way.

In retrospect, I think I was still suffering from “first day disorientation”, I was certainly quite tired. The route was quite busy and a lot of the traffic regulations were slightly skewed compared with those in Europe so I needed to be careful. Basically, I just chugged along in the afternoon sunshine.

I had not had any lunch and just as hunger began to make itself apparent, up ahead, I spotted a huge green figure dressed in “astronaut” style (but think “The Jetsons” not Apollo 16). It seemed that I had arrived at one of the Route’s sites, the Launching Pad Drive-In (810 E Baltimore St, Wilmington, IL 60481). I stopped and helped myself to a burger and fries and, for the first time, experienced the full horror of American portion sizes. It was a rule in our house, when I was growing up that, if you put it on your plate you had to eat it. So I did, but I was full to the brim before I got halfway through. 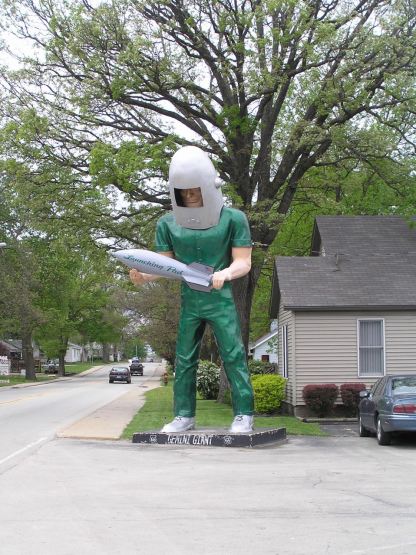 This did nothing for my resolve. I had only travelled about 100 miles and the food made me want to sleep. I drank a large Coca-Cola (and we are talking American “large”), which perked me up a lot because I seldom touch it in normal life. Then I was away down the I-55 at a slightly less leisurely pace.

Part of my instruction about the Harley was that I should never let it run out of petrol (duh !) and that, because it had no fuel gauge, I should always fill up around the 140 mile mark. A few miles down the road, as 140 miles loomed, I did just that. I was a little amazed that it only held about 3 gallons and more amazed that the fuel cost only around six dollars ! It seemed unbelievable when you think of what we were, even then, paying in Europe !

There is not much of note to see in Illinois, it is quite flat so there are no real vistas and I was getting my first taste of roads that dwindled to a point on the horizon.

Eventually, I came to Springfield or, perhaps more accurately, a Springfield. There are several scattered around all carefully NOT being the home of “The Simpsons” ! This particular one had, however been where Abraham Lincoln had once lived (and was also buried) and a multitude of signs directed visitors to a number of Lincoln related sites. Just for the hell of it, I chose Lincoln’s Home (413 S 8th St, Springfield, IL 62701). It was a handsome building preserved in a way that reflects the love which so many Americans still bear for “honest Abe” but the day was running away from me so I did not stop to look around. I found the I-55 again and continued south. 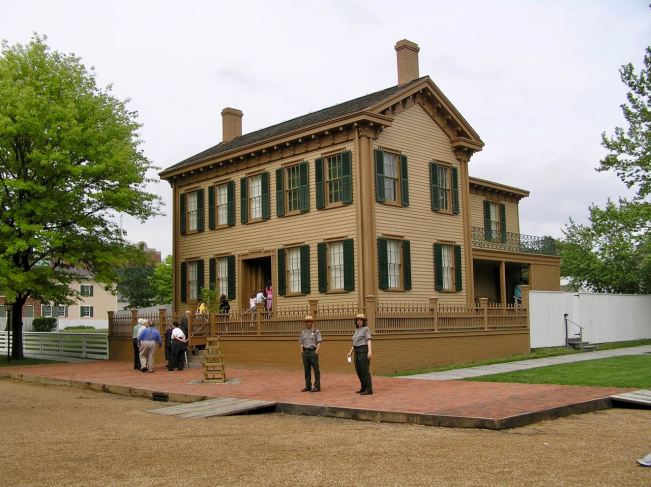 Eventually, as darkness began to fall, I came to Granite City which lies on the east bank of the Mississippi opposite St Louis. The State Line between Illinois, where I was and Missouri runs up the middle of the river. Between Granite City and St Louis lies the Chain of Rocks Bridge which was on the original Route and was known for having a bend of over 20 degrees in the middle. No longer used, it remains one of the sights to see. I was pleased therefore, to find an EconoLodge (3236 W Chain of Rocks Rd, Granite City, IL 62040) which promised to be very handy for it. 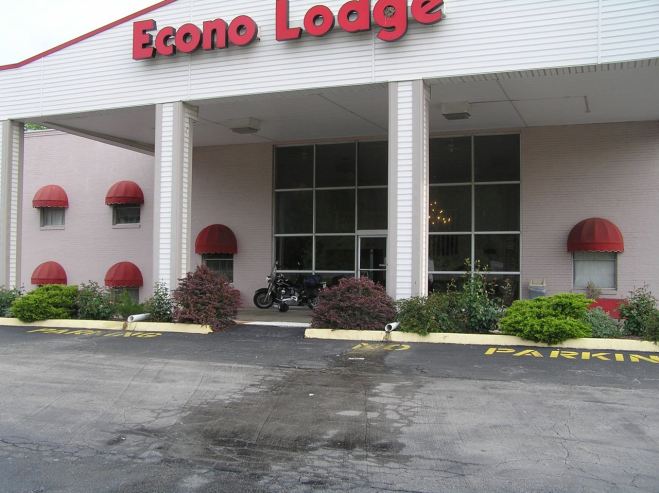 I checked in, decided I was still too full to eat and, after a relaxing shower, I was asleep in about 20 seconds.