I awoke to a dull and blustery morning. Grey clouds on the western skyline were already giving strong hints that it was not going to be a very nice day.

I was keen to get going so I skipped the not very enticing selection of biscuits offered as a breakfast snack and confined myself to a cup of turgid coffee. Tea did not even seem to be an option and I silently cursed myself for not bringing some bags of my own. I checked out, bungeed my small bag to the rack and set off.

There is nothing like getting your first error of the day out of the way – and I duly did. The Chain of Rocks road I was on helpfully led to a Chain of Rocks Bridge but, sadly, not THE Chain of Rocks Bridge. Before I really realised what was happening, I was crossing the Mississippi and, simultaneously, from Illinois into Missouri on a newish highway bridge that had replaced the original. As I was on the right hand side, with several busy lanes of traffic going in two directions to my left, the bridge of legend, about half a mile downstream escaped my notice entirely. By the time I was able to stop and, at least, try to reorient myself, I was already some distance into St Louis. I tried to go around in order to go back for a look, but somehow found myself lost in the maze of streets that started as soon as I left the freeway. With no sun to even give me a hint as to which direction I was heading, I blundered around for a while before locating a bigger road. Keeping the marginally lighter sky, where I hoped the sun was hiding, on my left, I then presumably went south, but, despite its size I was unable to locate the Mississippi.

In the end, the Gateway Arch appeared some way in front of me and I realised that I was not going to find the Chain of Rocks Bridge. I gave it up and headed for the arch instead. Not an auspicious start to the day.

The Gateway Arch is actually quite impressive. It is clad in stainless steel which would probably have shone beautifully on a sunnier day and is over six hundred feet tall. According to the blurb on a sign that I inexplicably failed to take a photo of, it is the both world’s tallest arch and the tallest man-made monument in the western hemisphere. The grey and wide Mississippi was right beside the arch and I briefly vacillated between the two possibilities of either climbing the arch or recrossing the river to try again for a sight of the Chain of Rocks Bridge. Crossing the river would have taken me first to East St Louis, noted, even then, as a place you should probably NOT go. That sort of left the Arch, but as I searched for a place to park it began to drizzle quite persistently, so I abandoned that option too and decided to get out of town before it got too wet. I spotted one of the now familiar brown “Route 66” signs and left the city.

What followed ranks, possibly, as one of the top ten most miserable days I have ever spent in the saddle of a motorcycle. The downpour was heavy and unrelenting and the spray, thick traffic and poor road surfaces made every mile a challenge. I was soaked to the skin and chilled to the bone long before I ever got out of St Louis. All morning I basically just chugged along. My visor kept steaming up so, if there was anything interesting to see, I failed to do so. I was feeling fairly low, this was not the sort of adventure I had been hoping for. Somehow rain, when there is no discernible point at which you can get out of it and everywhere seems so far away, seems so much worse.

I was also getting quite hungry. In the town of Sullivan, I spotted a sign for the Cracker Barrel Old Country Store (701 W Springfield Rd, Sullivan, MO 63080), which claimed to have a great breakfast, so I went there. A great breakfast it proved to be. So great in fact that it became my early-morning port of call whenever I spotted one, sometimes even, I admit shame-faced, when I was not hungry. Americans have a few faults, but they DO understand bacon. Heaven inside, hell outside !

Sadly, even lingering for way too long did not alter the view out of the window and, eventually, I was forced back out into the rain. 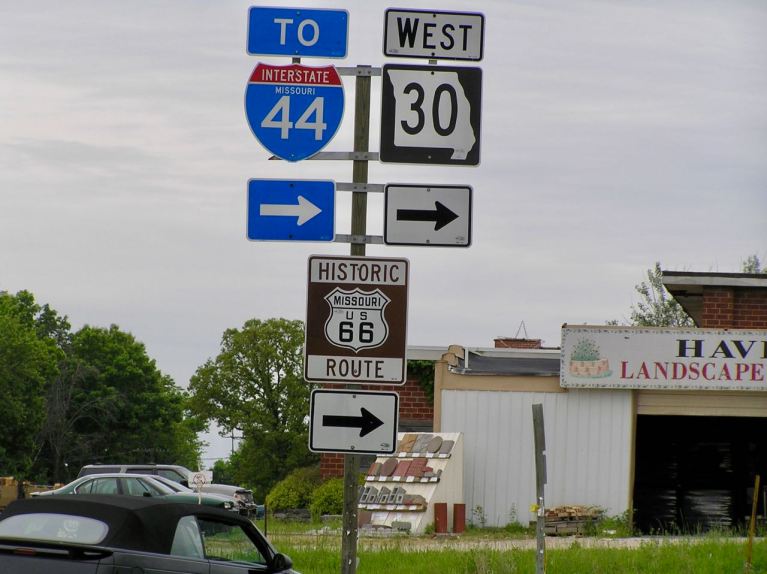 I was on I-44 which, in St Louis at least, had also had the “Route 66” signs at intervals along it. Now, peer as I might through the spray and condensation, I could not spot one of those brown markers. It seems strange in retrospect, but at that time, I had no way at all of checking to see if I was going right or wrong. All I could do was to keep going and to keep my limited vision extra “peeled” at any major intersection. I did know that the I-44 went, eventually, to Oklahoma City – and at least that is in the lyrics of the song ……

The only mental highlights of that day that I can remember are that it was raining hard in both Cuba and Lebanon and my relief, upon coming to Springfield, to discover it was Springfield, Missouri and NOT a return to Springfield, Illinois as a result of some ghastly navigation error ! There was no sign of “The Simpsons” there either.

In the end, damp and dispirited (which, in alliterative terms at least, sounds better than saturated and suicidal) I came to the slightly larger conurbation of Joplin. At a junction of the I-44 I could see the illuminated signs for various motels and decided to call it a day. For no particular reason, I chose the Riviera Roadside Motel Monday, May 8th, 2006 – (3333 S Range Line Rd, Joplin, MO 64804). It was the kind of Motel that you probably think about if you ever think about a motel. Cheap and cheerful probably summed it up nicely and I was quickly checked in by a smiling clerk. I peeled off my soaking clothes and took a shower to warm up a bit – I have to say the water pressure was, frankly, enormous – but at least it was warm ! 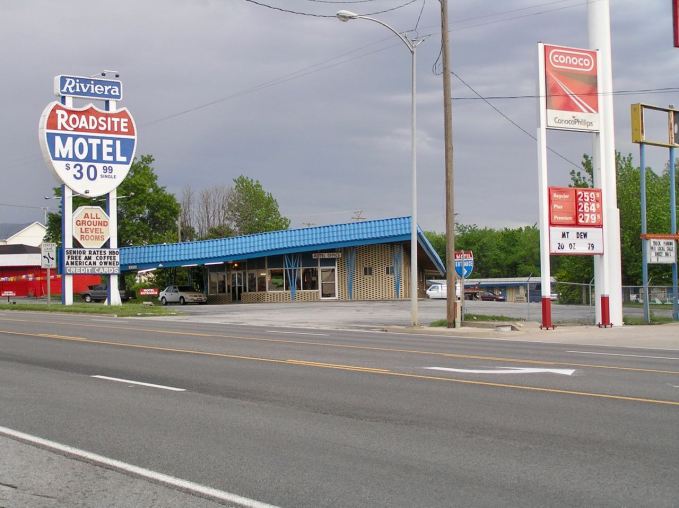 Slightly cheered, I put some of my damp stuff back on and walked rapidly to the Texas Roadhouse Restaurant (3317 S Range Line Rd, Joplin, MO 64804), which I had noticed when I arrived and which was practically next door. Although I ordered the smallest steak they had, it was still most of a cow stuck on a plate with a fried sack of potatoes and about four lettuces. I have to say that, hungry as I was, after eating the steak and the lettuce, I only managed about ten percent of the fries. The beer was passable and very welcome. My cheerful waitress (remorseless cheerfulness is also a very noticeable trait in the United States) asked me if I wanted the fries “to go”. I did, but not with me. Somehow the concept of eating cold fries in my room, in the middle of the night seemed paralysingly hilarious and I think my almost maniacal declining of her offer disturbed her somewhat.

Back in my room, I turned the heating up to full blast, draped my stuff over it and fell into a dreamless sleep.