When you are continuously on the move, particularly when you are by yourself, it is easy to lose track of time and, to an extent, I had done just that. I had promised to meet my friend, on the Northern Neck in Virginia, at about 14:00 on Saturday and, when I woke up, shortly before dawn, I realised that was about thirty two hours in the future, That does not sound too bad – but I was at least six hundred miles away and, if I did everything I wanted to do in the interim, that was probably much nearer to eight hundred.

I got up, showered again and checked out. I rode the few yards back to Angela’s Home Style Cooking (1799 APD 40, Appalachian Hwy, Cleveland, TN 37323) which fortunately opened at 06:30 and bolted down some bacon and eggs and a couple of coffees. I was not starving but, by my estimation, I would probably not get much else to eat that day. Then I hit the road.

I had a list of places scribbled on a piece of paper and that made my first destination the town of Franklin, in the next State east, North Carolina. I set off along the Route 74, which I was already on. It was a beautiful, deserted, well surfaced road winding slowly upwards through thick forest and rather picturesque countryside. After less than twenty miles, my stately progress was interrupted by a guy in a Hi-Viz jacket standing in the road with a “STOP” sign. I supposed there must be some difficulty somewhere ahead. I stopped and found I was right alongside a beautiful lake and, fortuitously, almost next to the sign for it. It was called Parksville Lake It looked so tranquil in what I am sure Americans would call “Dawn’s early light” that I took a couple of pictures. Then the guy’s radio crackled and he waved me on. Oddly, I did not see anyone else for miles, or any sign of disaster or catastrophe, so the reason for that brief interlude was never revealed. 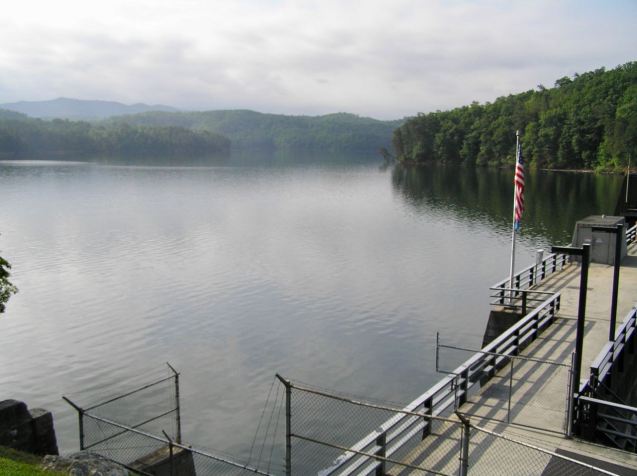 I followed Route 74 to the town of Murphy where it became the Route 64 which wound on gracefully through the mountains.

I crossed the State line into North Carolina and, a short while later, I came to Franklin. I will say straight away that, at the risk of annoying its residents, there was only one thing in Franklin that interested me and that was that it provided an opening for my “kleptomania” ! Do not worry, I was only collecting States. From Franklin, I was able to follow the Route 64 south to the town of Highlands, where it became Route 28 and then further south, where I crossed into Georgia (for the umpteenth time) and then over Pine Mountain (right on both descriptive counts) and over yet another State Line and into South Carolina.

Sadly, the up and down nature of the route meant I had run a bit low on petrol and I to continue to the town of Mountain Rest, where I filled up the Harley, drank a cup of coffee and then reversed my steps all the way back to Franklin. Ironically, the position of the sun on the return trip was such that it made that a far more pleasantly scenic ride than the way down. I had just ridden eighty miles for no real reason, but it was well worth it, I am surprised it does not appear on some list of “scenic drives” !

As I left Franklin, I noticed a sign stating that it was a centre of mining for gemstones. Sadly, as I had no shovel, I continued north east, on Route 23, to its junction with Route 74, which was proudly dubbed “The Great Smokey Mountains Expressway”. This was, of course, the same Route 74 I had left over three hours before in order to add South Carolina to my collection ! Ah ! Kleptomania !

The 74 led me into Asheville which is the southern entry point for the Blue Ridge Parkway. The Parkway does appear on the “scenic drives” list and also, with all due respect, knocked everything else I had seen for days into a cocked hat on the majestic scenery front. The “Parkway”, a designation which means it is closed to trucks, is a two lane highway that follows the crests of the Blue Ridge Mountains all the way to northern Virginia. It is principally, I think, Route 221, but I also suspect not always. It is frequently and clearly signposted however, so getting lost is almost impossible. As you should know by now, I try and eschew hyperbole, but that is difficult here. Such is the beauty of the scenery that only superlative adjectives would really suffice to describe it. As I always say, if you get the smallest chance to drive the Parkway yourself, go and do it. The road was well kept, the surrounding foliage was that special shade of green you only get in Spring and hawks were circling high above the valleys. The lack of any traffic for long stretches and the total absence of any freight vehicles at all meant that I could keep up quite a reasonable pace and yet still drink it all in. I did stop a couple of times to snap the view but, like it had been in the Grand Canyon, it was simply impossible to capture the true sense and scale of what I could see. There was an air of timelessness about long stretches and very little evidence of any modernity. 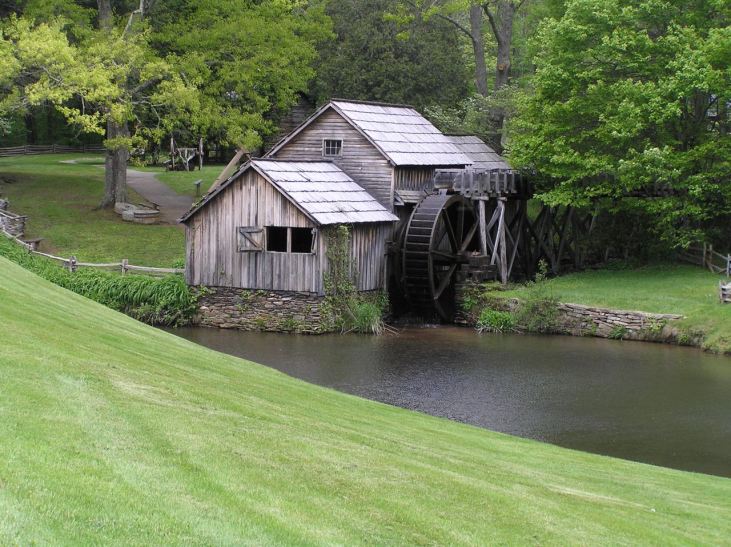 At one point, I came upon an ancient water mill (which is, apparently, THE most photographed thing on the whole Parkway), this only contributed to feeling that, as in so many other places, it might easily have been well over a century earlier. If I had met a regiment of Confederate troops marching north, I do not think I would have been very surprised. 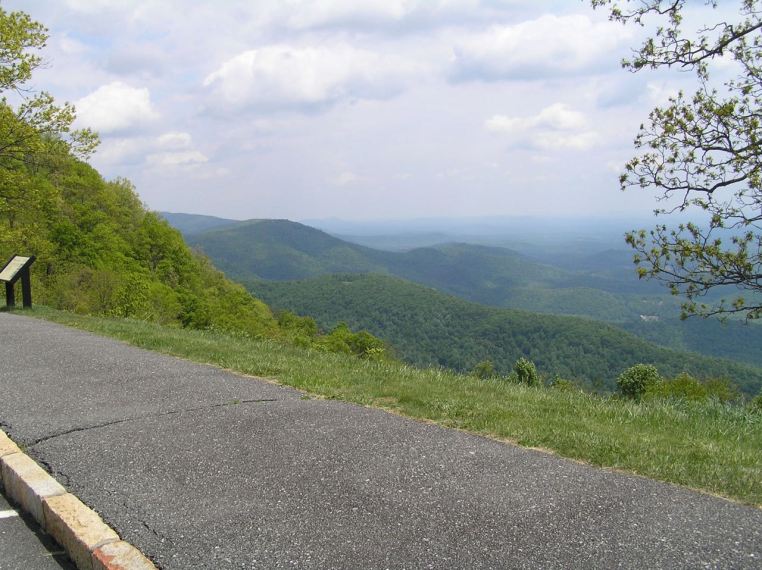 Far below, in the hazy lowlands to my left, lay the Shenandoah Valley. When reading about the Civil War, I had often wondered just how the opposing forces there had frequently failed to locate each other. From up here, the scale of the valley was obvious and I think even modern day surveillance drones would have a tough time finding the enemy in all that rugged scenery.

At some point, I passed into yet another State, this time Virginia, but I somehow missed the sign. Some areas, as I rode north, were more closely forested and although I had my visor up, in order to get the full sensory benefit of my surroundings, I was still going quickly enough to warrant close attention to the innumerable oncoming curves. When Roanoke was signposted, I knew for sure I was definitely in Virginia, my third “new” State of the day.

It was also a day that was advancing quite quickly and, by the time I got close to Staunton, where I needed to leave the unlit Parkway anyway, it was coming on towards dusk. I rolled off of the crest and down into the town in rapidly encroaching darkness. I had made it just in time. I saw a sign which led me to the Sleep Inn (222 Jefferson Hwy, Staunton, VA 24401). This was quite a grand looking establishment, a lot of soaring concrete and glass, but it was as casually welcoming as every motel seemed to be and had all the standard facilities. 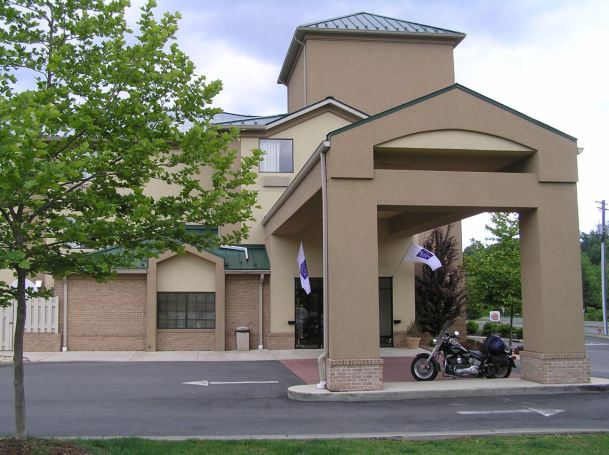 When I looked at the clock, I discovered that day’s odyssey had involved over thirteen hours in the saddle. I seldom mention the machine that made all this possible, but that is a tribute in itself. I was not stiff or aching and, even after over six hundred miles, I could still walk. And walk was what I did, to the Hometown Grill and Buffet (30 Sangers Ln, Staunton, VA 24401), which I could see on the far side of the petrol station next door to the inn. It was a burger place, so I opted for a Shroom and Cheese Burger which filled the hole well. They may have omitted the leading apostrophe, but they did not omit the ‘shrooms and it was surprisingly good although, as ever, way more than any single person could need.

I ambled back to the inn and, after formulating a plan for the following day, I was soon clean and sleeping soundly.