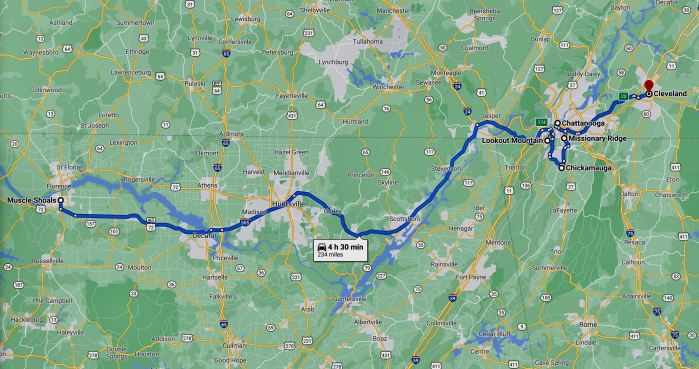 The following morning I woke up just as dawn was thinking about breaking. It was still a little blustery, but at least it was dry. Still on my “health kick” and mindful of the previous evening’s “Hush Puppies” and Pecan pie, I thought I might try and walk back to the Sound Studios (3614 N Jackson Hwy, Sheffield, AL 35660) for a daytime shot (the ones taken in the dark did not look very good on the small screen and most were, indeed, too blurred to keep). As usual, I forgot the disparity between walking and driving time and I suppose it took about an hour to get there – but at least it was completely light when I did. I took another picture and as I walked back to the inn, I managed a second snap of FAME (603 Avalon Ave, Muscle Shoals, AL 35661), in what was almost bright sunshine. My exertions had failed to make me hungry, so I grabbed a free coffee, checked out and hit the road. 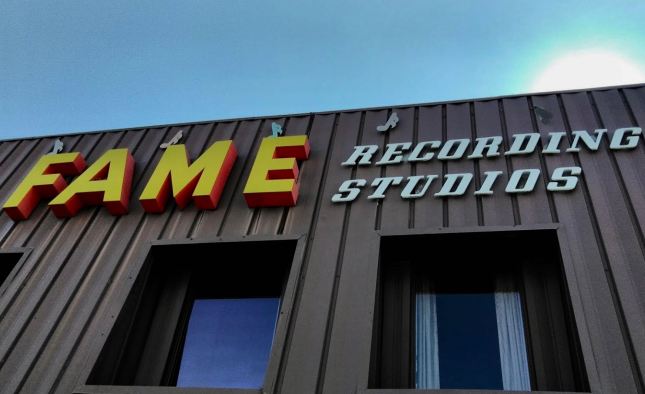 My first destination of the day was Lookout Mountain which was back in Tennessee and which was the site of a famous and ferociously fought battle on November 24th, 1863 during the American Civil War. I left Muscle Shoals southbound on the 72 by which I had entered it before switching to the enigmatic ALT 72 and heading east. I crossed the wide Tennessee River at Decatur, where the road became the I-565 before reverting to being the 72 proper just north of Huntsville, where it was rejoined by that road. I supposed I could have somehow got there on the non-ALT 72, but it was, by then, too late. The 72 went first south-east and then north-east as it followed a curve in the Tennessee River and I rode along with the river to my right. In keeping with the local policy of confusing outsiders (or possibly just Yankees) the 72 was periodically billed as both the 72 and the 2…….

I crossed the border out of Alabama and back into Tennessee and then took the I-24 east. When I stopped to refuel the Harley just before the interstate again took me across the Tennessee River at what seemed like a very wide point, I could clearly see my destination about ten miles away. It really did soar above everything, Lookout Mountain indeed. The I-24 looped briefly into the State of Georgia, but I was back in Tennessee almost before I realised it. I left the Interstate just west of Chattanooga and followed the signs via Route 41 and then Route 148 that took me up the very steep road to the summit of the mountain itself. There I found the Lookout Mountain Battlefield Visitor Center (110 Point Park Rd, Lookout Mountain, TN 37350). 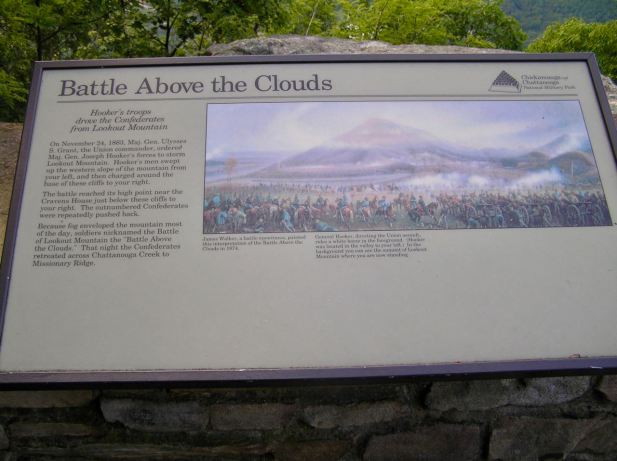 Because I have always had an interest in the American Civil War, the next hour or so was fascinating. The battle was dubbed the “Battle Above The Clouds” and involved the Union forces under General Hooker assaulting entrenched Confederate forces on the mountain itself. Aided by thick fog, the Union army was able to dislodge the Confederates surprisingly easily.

There is a famous photo of General Hooker standing on Ropers Rock and looking at Chattanooga, far below. I stood on the same rock, but the site was deserted so I was unable to recreate that picture.

On a sort of Civil War pilgrimage, I then rode back into Georgia to the Chickamauga Battlefield Center (3370 Lafayette Rd, Fort Oglethorpe, GA 30742).

This was easily found as the locals are very proud of their Civil War heritage and it was clearly signposted. For the record, it involved Route 58 back down the mountain, Route 17 southbound (which magically became Route 193) then Route 2 eastwards, before following the signs to McFarlane Avenue which led straight to the site, Although in sight of Lookout Mountain, this two day battle was fought over two months previously. Between September 18th and 20th, 1863, the Confederates, under Braxton Bragg, won what was probably their most significant victory of the war by routing Union forces under General Rosecranz. Losses on both sides were huge as is evidenced by the countless regimental memorials that dotted the nearby countryside.

Still not satisfied, I moved on to my next destination, the Missionary Ridge Bragg Reservation (S Crest Pl, Chattanooga, TN 37404). Because of the excellent signposting, which began right outside of the gate at Chickamauga, this was simple. I was able to follow Route 27 due north, for about 3 miles before being directed onto a smaller, unnumbered, road which was to the right but effectively straight ahead and, after another three miles, this bought me to the site. A mansion, that had been General Bragg’s Headquarters, the usual scattering of cannons and well kept grounds mark the place where, on November 25th, 1863, following their success at Lookout Mountain the day before, Hooker’s forces surprised and then overwhelmed Bragg’s Confederates. Again, the loss of life on both sides was significant and memorials abounded.

Leaving the ridge, I rode down the steep switchback road into Chattanooga. I was mindful as I did so that Hooker’s troops had somehow moved up the same slope with sufficient speed or guile to catch out the wily Bragg. I wanted to go into the city to try and get a picture of Lookout Mountain from ground level. I entered the city on the I-24 and turned left on the banks of the Tennessee River. Sadly, the late afternoon weather was closing in fast and it is not a good photo.

I needed to keep heading east but the day was starting to die on me. Somewhere in my endless number of State border crossings that day, I had lost an hour and darkness was threatening. I had not really, at that point, thought the next bit through so, after about thirty miles on the I-75, I left the interstate at the town of Cleveland. I saw a motel sign and followed its directions around Route 74 and found the promised Applegate Inn (1857 APD 40, Cleveland, TN 37323). It was cheery, but a little bit spartan and I quickly bagged a room.

As is so often the case, there was a restaurant almost next door, in this case Angela’s Home Style Cooking (1799 APD 40, Appalachian Hwy, Cleveland, TN 37323). Although I had not eaten all day, I was not desperately hungry and even the five ounce Philly Cheese Steak (which I tried because I had never had one) had so many “sides” that it filled me to bursting point. I washed it down with a couple of beers and called it a day.

Although the Applegate Inn was probably a level down from most of the places I had stayed, it had a shower and it had a bed. It used them in that order and was soon in dreamland.