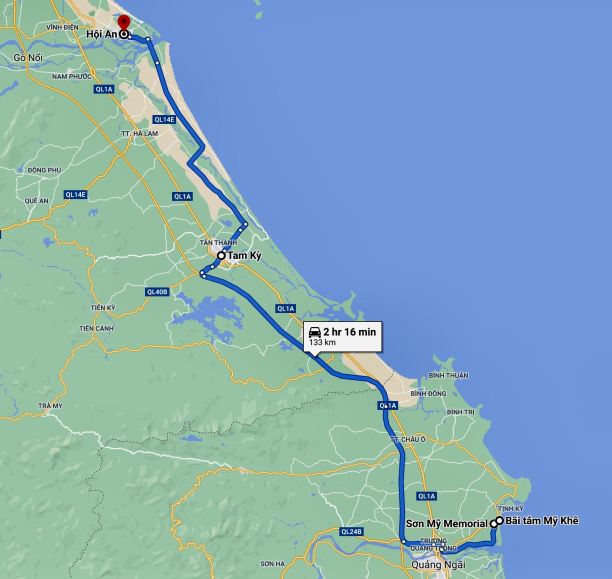 Being “purpose-built“, the resort of Bai Tam My Khé did have a huge beach, fringed with palm trees. David went out to capture it in the first light of dawn when it was totally deserted apart from a few stray dogs. 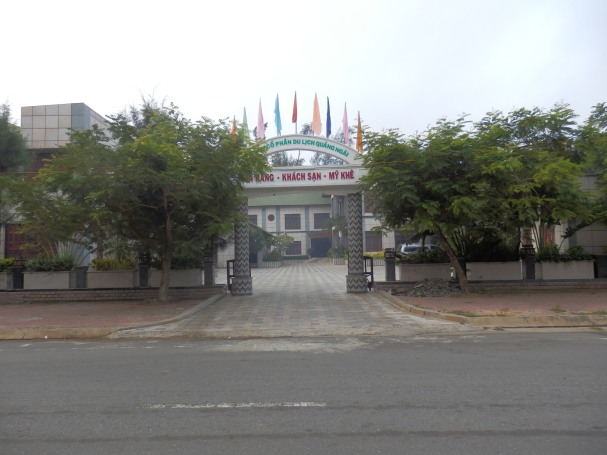 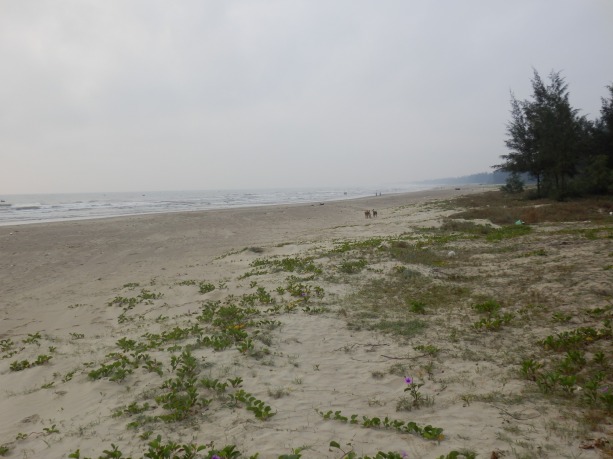 I was content to watch the sea from our balcony.

One thing our night in luxury did buy us was a truly excellent breakfast. It was so good that we ate it quite slowly and that delayed our departure for a while. The hotel Rules and Regulations, posted by the Reception desk, were quite amusing ! 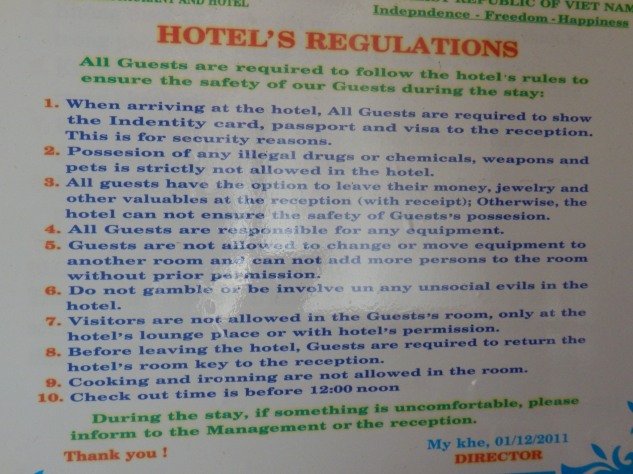 We supposed that, as we had, at least in theory, under 140 kilometres ahead of us, we had plenty of time. Even the fact that something unforeseen was almost certain to arise during the day, we expected to make it easily to Hoi An by the middle of the afternoon.

On the way back to the highway, we stopped at the Son My Memorial which was, by then, open.

On March 16th, 1968, the village of My Lai (Son Mai) was attacked by American troops and over three hundred and fifty men, women and children were massacred. The remains of the village are preserved as a memorial. Sadly, the reconstructions of the foundations of the burned out houses, with not very realistic models of shot cattle, dogs and cats did not seem very convincing and the “traces of American shoes and barefoot children’s feet in the mud of the village“, which was made in coloured concrete, seemed horribly kitsch to western eyes. 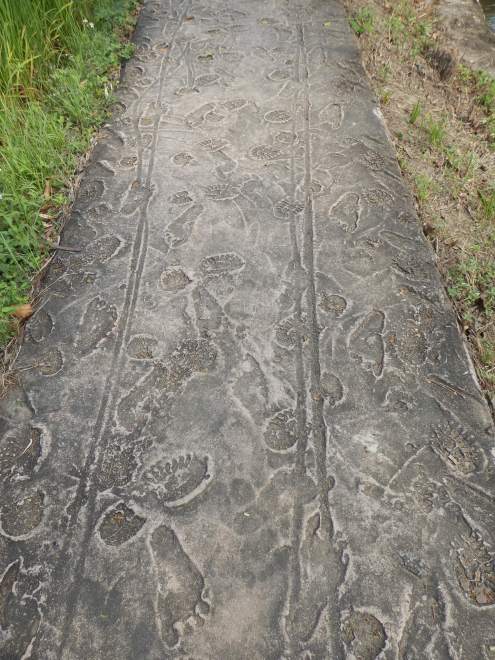 A sign at each place tells you mainly what used to be there and enumerates the casualties. 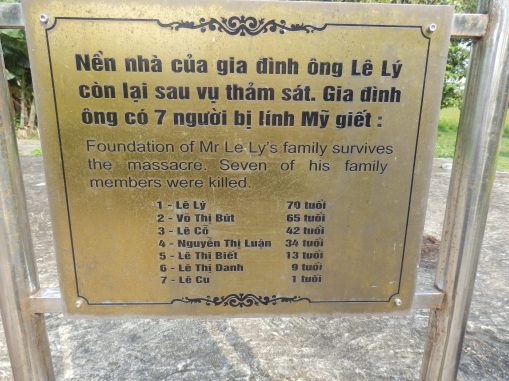 A bullet riddled palm tree is stated to have survived the massacre.

However, anyone who visits must have a chill running down their spine when they look at the gallery of photos, proudly taken by the American troops. I did not photograph them as they were too distressing. These almost have the air of holiday photos, composed and taken by a professional. Something terrible happened in My Lai and the photos had only one purpose, to scare the Vietnamese people with what could happen to them if they supported the wrong side. The pictures of handsome smiling Americans, with dead bodies from the smallest of sizes in the background are heartbreaking. Others show a woman sleeping, no doubt just before she was shot, several women with children being shot as as they ran away and the expression of an eight-year-old boy who had probably just realized what was about to happen to him.

What the various sides say about the massacre is quite different, but the photographs say it louder than any propaganda. In another picture, a young man with a flaming torch is standing posed and smiling at the camera before he sets fire to a shack. It was almost as if he was about to kindle the Olympic flame. It was a carefully planned and thoroughly carried out massacre of civilians, solely to obtain the most frightening documentation possible. It was an evil thing and no amount of, so called, “justification”, that the communists committed many similar atrocities, will ever make what happened there right.

In sombre mood, we took to the road again and pointed Minh northwards. We were well used, by that point, to seeing unusual and often unfeasible things being carried on mopeds. However, a man carrying another moped on the back seat of his moped still provided a moment of much needed light relief.

The previous evening, before falling asleep, I had discovered that there was no railway station in Hoi An. With our time running out and no prospect at all, by then, of making it all the way to Hanoi on two wheels, the rest of the journey depended, quite dramatically, on us somehow getting a train. Therefore, I renewed my search for a station and, soon found one, at almost the first attempt, at a place called Tam Ký. We made a diversion and went there first. By Vietnamese standards, it was quite easy to find the station.

Having already proven himself as a station negotiator (tickets were sold by really young people (almost babies) and he could handle them), David was sent to complete the difficult task despite his protests. His instructions were clear, he was to obtain two tickets to Hanoi, at any time after the following Friday in anything that went on the tracks, even a cattle car. He disappeared into the crowd at the station and, when he had not returned for a suspiciously long time, I went in search of him. At that very moment he appeared, walking towards me with a huge smile. To cheer up all the cleaners present, the cashier, a few bemused passengers, a pig and two ducks in baskets, he waved his hand with the tickets whilst grinning from ear to ear. He was so happy he was practically hopping about and, to me he looked like a Buddha in Nirvana. He had managed to get tickets for the train we wanted the most, on the next Saturday, at four in the afternoon from the station in Hue.

From there, it was supposed to be a easy trip to Hoi An, but, of course, it was not. Considering that, to Lonely Planet at least, Hoi An was said to aspire to being a “classy city”, finding it was unexpectedly hard. Sign posts do not seem to exist at a local level in Vietnam and, in the end, although I had researched it, we still needed again to be “taken” there by two obliging Vietnamese. Although to find Hoi An, we needed to be guided only about two kilometres and that hardly counts. But, I suppose that is, in itself, indicative of the lack of clear signposting.

Once we found the city, navigation was quite easy. We found the hotel An Huy and we really liked it, it was very stylish. Once installed, we first of all decided to visit the Japanese Bridge, one of Hoi An’s key sites. David, who was in charge of navigation whenever we were walking, messed it all up and we got lost. We found a bridge and it did look Japanese, but it was not THE Japanese Bridge. It was called the Cau An Hoi Bridge.

Oddly, it was an American who finally explained the correct way to us !! We found the real place we were looking for. The Japanese Bridge was not so visually impressive, but it has somehow survived there for over four hundred years.

It was then that David found out he had lost his credit card. This was another blow to his ego. We found the bridge, but of course, we did not find the credit card. Perhaps luckily, because we always end up having some unforeseen problems with getting money whenever (and wherever) we travel, we had variously distributed backup funds. That meant our only real problem was the unbearably long call to England (then re-routed to a know-nothing in a call-centre somewhere in India), which probably cost us more than our two days in Hoi An all inclusive.

The city was very pleasant and relaxed. 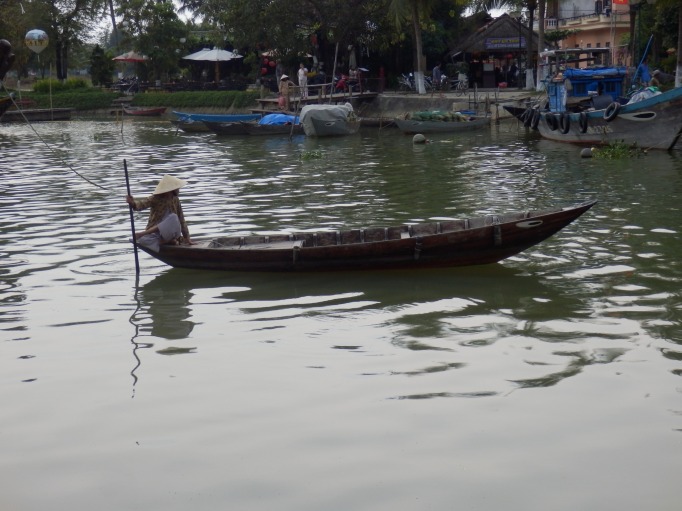 Quite unusually, because thus far we had been used to being more or less the only foreigners in a town, there were a lot of tourists. We spent some time wandering around the markets. 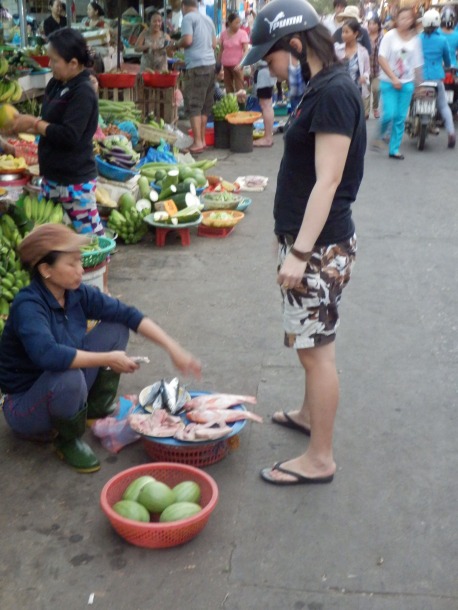 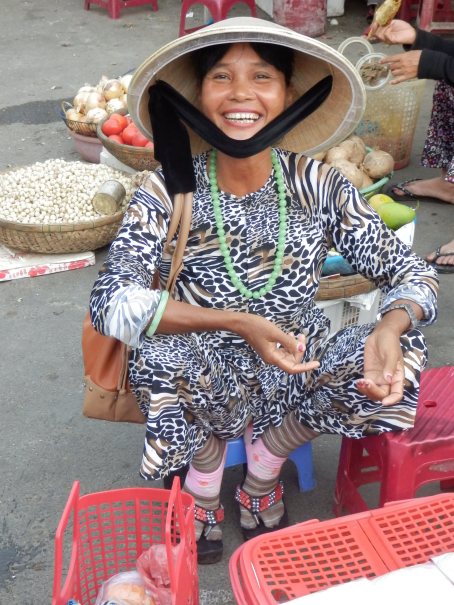 We finally bought some things for ourselves and a few other little trinkets for our friends at home. David won again with his charm. I went back to the hotel to get some cash dollars and, in the meantime, the staff of women gathered around David in the shop. Of course, they suddenly all spoke English and it looked like I would be saying goodbye to all our money. But, in the end, the little things we bought cost us only twenty dollars, as David says, nothing. I advised him not to shout the news to the Vietnamese people that, if it was priced in dollars, it did not cost us anything. That could go wrong. But we did allow ourselves, with common sense, to shop a little bit. From then on, we would not have Minh and would need to carry our own luggage for the rest of the holiday.

Strangely, what turned out to be the best culinary experience of the whole day was the “dumpling“. I first saw these being sold on the street in Da Lat and I had wanted to taste one ever since. It was like a small, steamed cannon ball with a filling of meat, mushrooms, onions and other, less identifiable things with a quail egg at the very centre. Absolutely delicious.

While we were playing at being “normal” tourists, I did also try a chocolate mousse with pomegranate icing.

We had dinner, down by the river where we tried a local specialty, a rice pancake stuffed with omelette, “do it yourself” style. The whole thin pancake was soaked in water and, when it softened, the omelette was carefully placed on top of it. The filling, a mixture of peeled vegetables and herbs was added on top of that and it was rolled up like a tube. Of course, many of the pieces began to fall out and, at best, landed on the table. We both agreed that, in Hoi An, the restaurants had adapted the style and tastes of the cuisine for the tourists. We already missed “the real Vietnamese” we had been eating on the road. Hoi An was a very pretty town at night.

We were both quite excited. In the morning, before we had even left Bai Tam My Khe, I had felt a wave of tiredness. The constant need to plan and re-plan, the slow trekking around and the overall toughness of the travel had worn me out. We had not anticipated quite how hard it would all be and we both felt that it was really high time to take an unenforced break. Now we had achieved the goal on which we had focussed our efforts of the previous few days and reached a point from which the rest of our plans could, hopefully unfold more simply. We would spend the next day relaxing and then it would be just a short drive to Hue, from where we would return Minh and take the train to Hanoi. That sounded simple and was dependent on there being no complications along the way. I quickly thought of at least fifty possible ways it could go wrong, so I guessed if anything did happen, it would be the fifty-first one anyway.

Because he grew up in the countryside, David thought this sign was impossibly amusing !

On the way back to the hotel, we made the completely spontaneous decision to visit a famous Cham temple at My Son. We bought an organised “trip” (we had finally become proper tourists) so we would not have to look for it ourselves. Naturally, it left at five in the morning, for sunrise over the ruins, so we really were going to have a day of rest!