After a breakfast at a place catering for backpackers, we set out with the idea that we would have both a peaceful and a short trip. As it turned out, we were wrong again. In the end we drove 202 kilometres.

Our original plan was to stay as near to the sea as possible and to find another place to stay “somewhere on the beach” about a maximum of 150 kilometres further up the coast. Needless to say, the surfaced road slowly veered away from the sea and it did not look as if we would run into a beach at all, let alone a hotel that was on one.

I had searched maps on the internet at breakfast time and it appeared there was a “purpose built” beach resort at a place called Bai Tam My Khé. That was farther than we really wanted to go, but I was, at least, psychologically prepared in advance for that seemingly inevitable eventuality. We retrieved Minh, from where he was parked next to the reception desk and set off.

Almost at once, as we began to climb into the hills, we could see what looked liked some ancient structures. We took a small diversion and found some very old, brick-built constructions that looked as if they might have been temples. There were no explanatory notices and no mention in the Lonely Planet, so we did not really know then what they were. Later, after we had taken an “official” tour to another, similar, complex, we concluded that they had probably been built by the Cham people. They were still quite impressive to see and to go into. 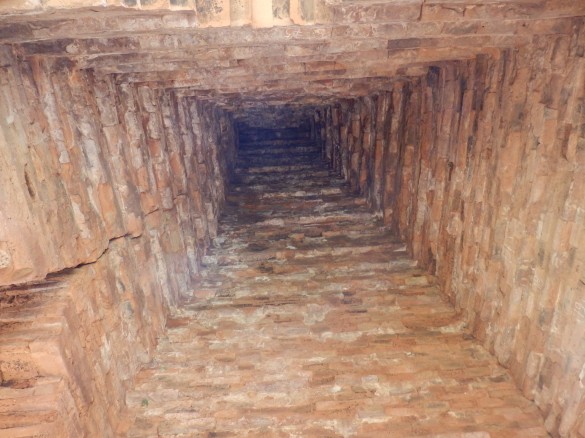 On we went. As on the previous day, the local people were all using the moped lane to dry their crops in the very warm sun. Progress was, as a consequence very slow and we had to take care when we were being overtaken. I think it is safe to say we were both pretty sore. 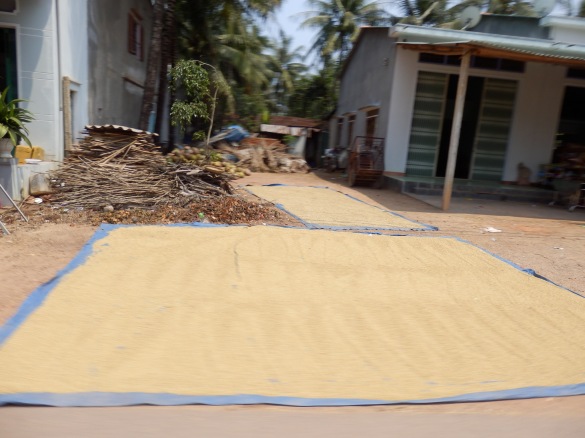 We probably made more stops than we needed to, because we were suffering a bit. So, when we spotted a stall selling coconut drink, we took another break. Again, the lady proprietress showed a rather scary proficiency with her machete. As David said, I would not want to start an argument with her ! I was able to relax in a handily placed hammock while I drank my coconut milk. She also offered me, what I think was, a sweet potato to eat. It was delicious. 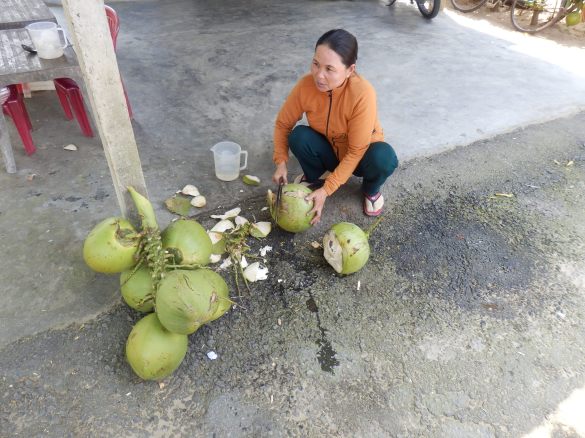 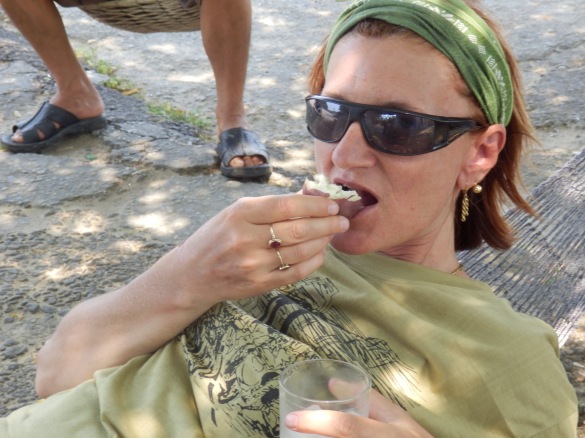 We can categorically confirm that the Bai Tam My Khé beach resort does exist. We have stayed there. What baffled us was that, considering that it was, as I said, “purpose built”, it was almost as if it was a State secret. Admittedly, our map was a bad photocopy, but even when we were actually right on top of it, there was no indication, anywhere, that would have led us to it.

What we did know was that it was very close to the sad, historical site of My Lai (Son My). In March 1968, a whole village, thought to be sympathetic to the Viet Cong insurgents, was systematically wiped out by American troops. This included a lot of women and children as part of the civilian inhabitants. It was a pretty horrible story from the part of the war that the Americans fought, to distinguish it from the war just before, which was fought by the French. Strangely, there was a third war, against the Chinese and people told us this was much worse than the two previous ones.

Anyway, one might think that such a national monument against brutal imperialism, so handy in propaganda terms for the communist regime, would be well marked. This was not the case, it was not marked at all. If we had not known, roughly, where to look, we would never, ever have found it. When we began to suspect that we had already driven past it, I tried to enquire. Luckily, the first Vietnamese man I asked spoke quite good English and he sent us back down the highway for four kilometres. David claims that the Vietnamese have no real concept of distances once they deviate from their immediate surroundings. That is the sophisticated way of putting what he actually said, but I think he may be right. Mostly, we believed, they do all exist in a fairly limited geographical “sphere” from which they seldom venture out and the outside world, even just a few kilometres away, is a big mystery to them.

In truth, there was, after slightly more than four kilometres, a tiny road heading towards where the sea had to be, so we went down it. 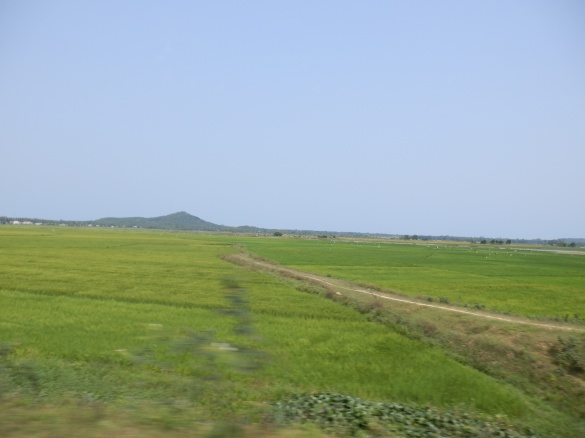 The surroundings became increasingly rural and, after driving through several villages, we ended up on a totally unpaved road. Sitting in a nearby shed, with nothing but featureless paddy fields stretching in every direction, were two guys. It seemed they might actually have heard of Son My and they tried to draw me a plan to get there. When it became obvious that it was beyond our power and understanding, one of them got on his own little motorcycle and gestured us to follow. In the end, he led us for over 14 kilometres, through what were often little more than faint and undulating tracks through the rice paddies.

In places, small, colourful collections of graves could be seen in what were obviously communal cemeteries.

Finally, we came to a long straight stretch of road. He gave us a big smile, gestured ahead and then started to ride back the way he had come. David wanted to pay him for his petrol, at least, but he shook his head, He disappeared back across the paddy fields and was soon lost into the waving rice. This was a totally rural and seemingly deserted area and I feared that, if we were not going the right way, we would never find our way back. 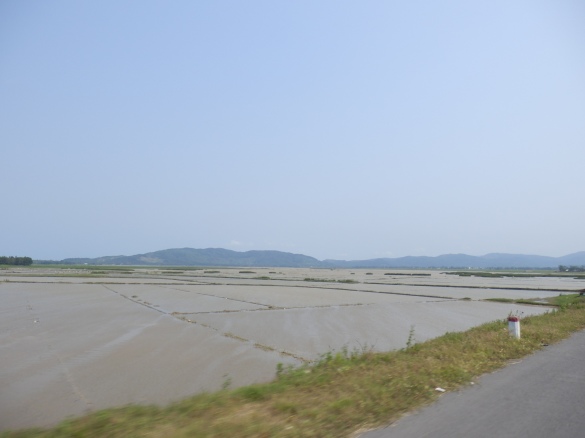 Luckily, the site of the former village of My Lai was only about a kilometre up the road, but it was heavily fenced off and closed for the day. We decided to go on to Bai Tam My Khé and find a hotel and to try again the next morning.

It was soon apparent that we should have prevailed upon our guide to take us straight to the resort. It was not signposted at all and, although Lonely Planet said it was there, it would have saved us a lot of nervousness if there had been some other indication of this. We did know for sure that there was a hotel somewhere and that it was open, but it was not until we came out through the trees and saw it that we truly believed. We were not too worried, given how impossible it was to find, that it would be full – and it was not. By the standards of everything that we had so far seen in Vietnam, the hotel was stupendously luxurious. It was situated right on the beach and surrounded by literally acres of paved walkways and patios interspersed with spectacular flowering plants. It was totally surreal. The receptionist seemed almost apologetic to relieve us of 240,000 Dong for our night’s stay. By local standards, that was an astronomic amount and probably ten times what we had been paying. That said, the 240 Czech Crowns which it was equivalent to, would not even have got you a small beer in a similar style hotel in Prague.

We were so totally exhausted, that we did not really take advantage of the amenities available. We did have a nice shower and a brief walk around the grounds before a small meal, but basically all we wanted to do was to sleep. It seemed that we were steadily going up in terms of the number of beds in the room. We had started with one and, when we first had two, it was a surprise. That night we had three king sized beds and our room was the size of a small football field. David said we could have had a game of cricket without moving the beds at all. 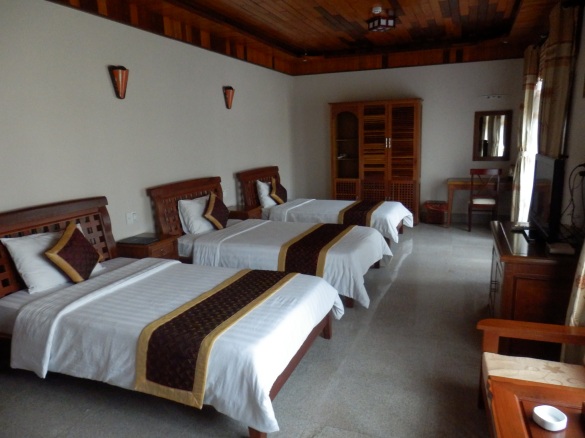 At ten o’clock in the evening there was serene peace everywhere. Strangely, in the silence, the gentle sound of the sea lapping on the beach seemed impossibly noisy !